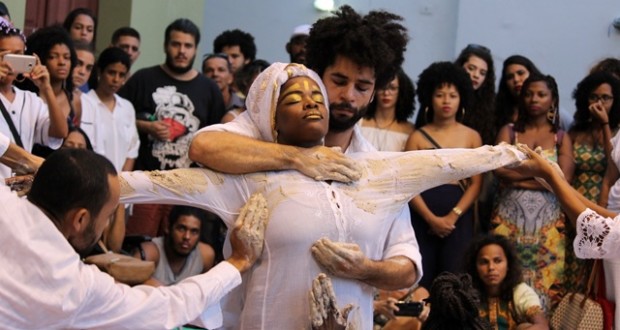 A search with almost 10 years about Afro-Brazilian dance was transformed in the book “Aesthetics of the performative practices of Afro-Brazilian scenic dance”, by Maicom Souza e Silva, philosopher and dancer from Espírito Santo. In the work that will be released independently with distribution from Editora Appris, the author talks about a scenic work developed within the Coletivo Emaranhado, in the show "KALUNGA", with observations on body research announced by the artists, in addition to information about the aesthetics of black-Brazilian gestures.

Maicom's history with dance in the state goes back to 2010, when he started researching about dance promotion, looking for notices, private resources, policies and laws of incentive for the development of scenic projects. From 2013 it also includes academic research., when talking about the aesthetics of Afro-Brazilian scenic dance and its ramifications in the diaspora process, as a focus on setting up dance performances, creation of workshops and film production.

"I am in a professional phase in which I intend to direct my studies to Afro-Brazilian manifestations, working with projects from an Afrocentric and intersectional perspective, considering the body and black art as a whole of great importance, in the purpose of defending black-Brazilian cultures and their ideals, through dance.”, explains Maicom Souza e Silva, book author.

According to the author, There are no publications in Espírito Santo by dancers who talk about the aesthetics of Afro-Brazilian scenic dance, or even philosophical reflections on local black dance production.

“I think I'm literally writing history, leaving critical possibilities for thinking about black dance in Espírito Santo to posterity. It is necessary for black people to write about black people, we need to question the derogatory readings that are made about black people, bringing to the scene knowing others, so that our audience can develop their repertoire on black cosmoperception, emphasizing the black-Brazilian habitus of verbal exposure, intellectual and gestural as manifestations of great cultural importance.”, Analisa Maicom.

The book is available for purchase in the main bookstores in the country, in physical and online format. Find out more information on the website: www.coletivoemaranhado.com.br/kalunga

Maicom Souza e Silva is a philosopher, ballet dancer, cultural producer, Instructor of Black-Brazilian Dances and Master's Student in the Metaphysics Program at UnB (University of Brasilia). Since 2013 works as manager and dancer at Coletivo Emaranhado, and from 2016 he became a professor at the Museu Capixaba do Negro Verônica da Pas – Mucane, in the Afro-Brazilian Scenic Dance Qualification Course. And still, is a partner and administrator of Bule Estúdio Criativo, since 2018, who takes care of film production and performing arts management in Vitória (ES). In addition, graduated in Philosophy and also in Marketing, Sales Management and Business Management by UVV (Vila Velha University). It has been awarded more than 60 cultural projects, also acting as a cultural facilitator formed by Minc, since 2017.

Previous: Kildary Costa debuts in literature with book “The Park”
Next: 8st. June Festival in Liechtenstein, by Rosângela Vig