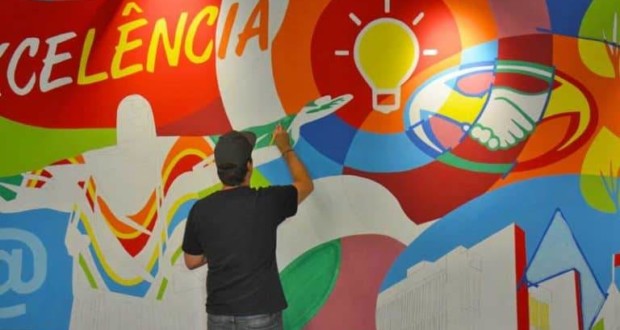 The Free Market invitation, the artist Lobo signed the main panels that make up the Florianópolis Comunity, new headquarters of the group located in Florianopolis Technological Pole (SC) and inspired by the companies in the Silicon Valley, in California (USA).

Recognized for its contemporary reading of Pop Art, Wolf produced a work whose concept mixing cities and Brazilian culture elements related issues and representing the Free Market brand, in this company 18 Latin America, which has the highest buying and selling community in the region.

One of the hot topics for art that make up the mural is a representation of the famous Hercilio Luz Bridge, one of the main postcards of Florianópolis. The art is spread in the work areas and also in recreational areas, where are game rooms, massage room, dining room and doctor's office.

For spaces, Wolf represented the Free Market company in Latin America, with the architecture of countries like Ecuador, Peru, Mexico, Chile, Uruguay and Argentina. The murals around the city concept have the total size 2,60 meters height and 25 meters wide.

In addition to the work areas, the new headquarters also incorporated leisure facilities, a games room, doctor's office, massage room, and the cafeteria. 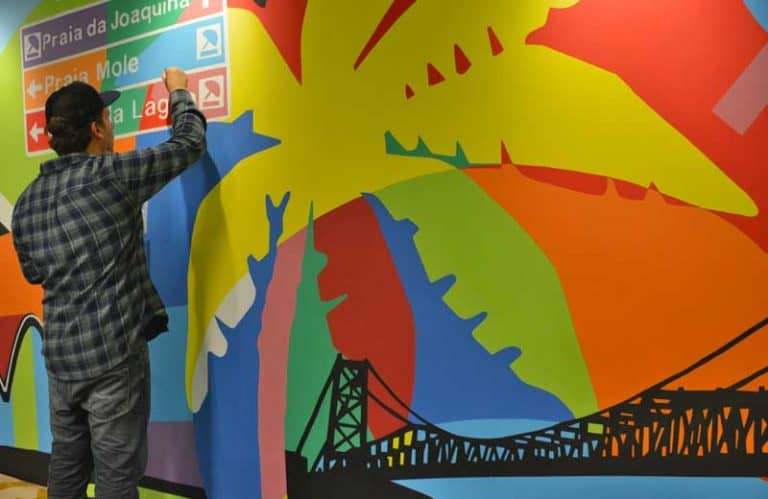 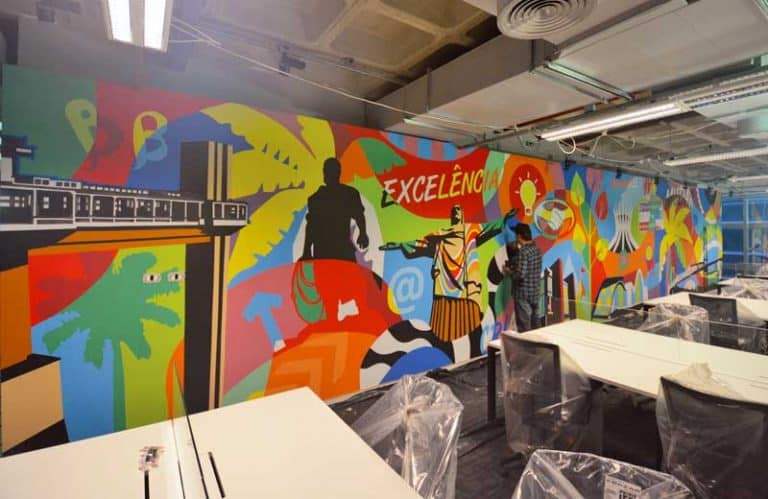 Owner of a unique style and full of personality, the Wolf artist is considered a reference in Pop Art, in Brazil and in the world. His inspiration comes from a new wave generation, packed for The B-52s, David Bowie, Sigue Sigue Sputnik, among others. The image of Robert Smith (The Cure) painted the first artist Wolf screen is proof that music, even indirectly, was a big influence early in his career. Wolf believes that especially the colorful Brasil He sets the tone by his Pop Art style. His art of outstanding features and vibrant colors, seeks to portray the story of the people, which illustrate with vigor and emotion icons of the main cities of the world. Each frame carefully gets up 10 layers of colored paint. also admired in other continents, Lobo has his paintings scattered throughout several countries besides Brazil, like the United States, Germany, Holland, France, Spain, Mexico, Australia, Italy, Switzerland, among others. The artist participated in exhibitions such as Monica Parade, CowParade and Elephant Parade. On Festival Brazil Amsterdam He had a solo exhibition.

Previous: Performer and Artist Visual SHIMA is occupation of Earth's Core
Next: How to apply the red carpet look Bruna Marquezine in real life