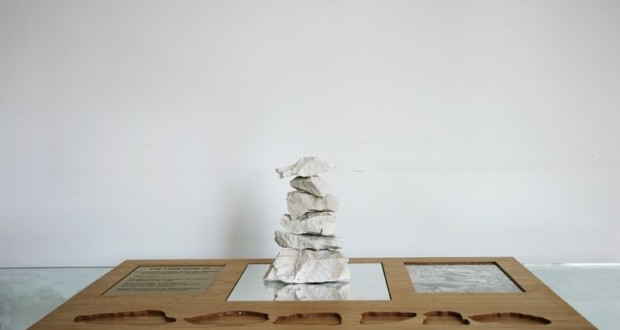 The Italian plastic artist Brazilian Lucio Salvatore presents the exhibition #2015_1 fragment What will happen in the post office and Cultural Centre, at the same time, in an external circuit with works installed in some streets and shops of downtown Rio de Janeiro 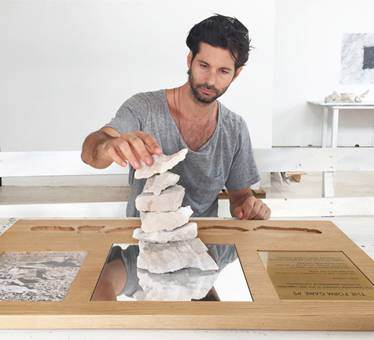 The Italian plastic artist Brazilian Lucio Salvatore carioca is presenting the exhibition #2015_1 fragment, curated by Fernando Cocchiarale. The show brings together facilities, pictures and videos that will be presented in two modules, the first in the Centro Cultural dos Correios, from 4 September to 3 October 2015, and the second set of works installed in some streets and shops of downtown Rio de Janeiro, from 3 to 11 September 2015.

“The exhibition is made up of ruptures and pieces moved from a unit that never existed, recomposed second new constitutions that impose works”, explains Salvatore. The show begins a cycle of projects that have been designed in the form of a fragment, are incomplete speeches, open, to be handled by the public, by the time.

Italian-born in Rio de Janeiro, Lucio Salvatore has already presented two projects here. The first, "One Blood/Fmemory enomenologia“, in 2010/2011 (at the Centro Cultural Correios, in Rio de Janeiro, with more than 15.000 visitors, and in the MuBE Museum, in São Paulo), that impressed everybody, where the artist used the blood of own portrayed. And the second, "Space reduction project" with the theme of the relationship between capital and nature ', in 2014 (Cultural Center Post, in Rio de Janeiro), where the artist presented a series of Monotypes performed with a method of frotagens representing the topographic memory of mine excavation and lavoração of stones.

The exhibition #2015_1 fragment is divided into two modules : the first, presented in the Cultural Center Post, is a group of works whose dominant issue are The games of meanings that occur over the life of the work of art, Since its inception, and relationship with the public to the possession by the collector. The works raise a question of power among the people who participate in them. The dialectic between unity and multiplicity is very present in the works of Salvatore.

1400 MANIPULATIONS AND A RULE, 2015 – Installation – 280x1000cm – 1400 black squares, cotton paper, paste rule, collage action held by the public. The work deals with the relationship of power between the artist who creates a field of meanings and which users to manipulate.

INDIFFERENT MARGIN, 2015 – This kind marginal (400x110cm) inscribed by the artist at the entrance of the Giardini was canceled by the passage of the public invited to premiere at the 56to Venice Art Biennale, in may 2015, during 12 hours, the time of collective action. Registration of the work: #2 Photos 80x60cm, a book with a selection of 512 images of the passage of the public.

POST-AR, 2015 – #4 boxes, each containing 9.936 cm3 of air sent by mail from Italy to Rio de Janeiro. The logistical system used for the displacement of air is the raw material of the work: packing, stamps, payment system, work of employees of companies involved, shareholders of the company, Customs, taxes etc. 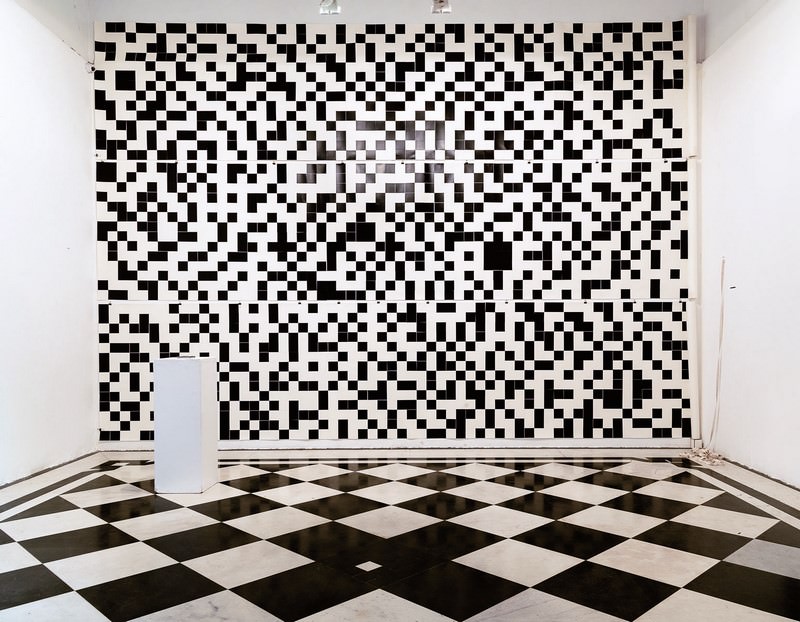 THE END OF THE BLACK SQUARE #1, 2015 – Video – Part of a project carried out in Italy in June and July 2015 and also represents a connection with the next show that Salvatore is preparing for 2016 #2016_1 fragment. The artist drew on the walls of a quarry a black square in tribute to 100 years of painting creation Malevich and then immediately broke this wall with excavation machines, reducing it into a thousand fragments of rock bearing the black marks of the square.

LAVRA (TRAIL), FATHERHOOD, CLUE, 2015 – Video – It is also part of a project carried out in Italy in June and July 2015 and also represents a connection with the next show that Salvatore is preparing for 2016. The artist has has appropriate excavation process within a quarry for a form of sculpture expanded, the primary form of symbolic man let sign (Trail, Mark) their passage, the creation of the world from the land inherited. Salvatore that until now had never signed the works created, solve for the first time you use your subscription to question her value by the meaning of work.

A second set of works creates a external circuit to Cultural Center Post composed of works installed in some streets and shops of downtown Rio de Janeiro. These works deal with the legal matter and space policy, of occupations, of ownership and legal ownership or real land and urban environment.

UN METRO QUADRATO DI TERRA #1, 2014 – Installation with variable dimensions. Real estate Sale process. Agreement of purchase and sale of a plot of land, pictures of Earth exposed in a real estate agency in Rio de Janeiro. This work is an agreement of purchase and sale of a portion (1/100) of square meter of land owned by the artist in Italy, identified by a marble sculpture. Question of the work of art as an investment, until object of speculation.

HERE ALSO HAS SPACE FOR ART – Installation with variable dimensions. This work is part of a project started by Salvatore in 2014, a project that questions the nature of the use of public space for public or private purposes. The project consists of occupations carried out with different objects and systems used daily by people and companies to define and use public spaces. To #2015_1 fragment the artist will occupy an area of the city centre, a place that will not be revealed explicitly for that work can raise the questioning and doubt the public front of each space, whose occupation is questionable. The artist in this way wants to use the questioning and doubt from the public as raw material of the work.

NEUTRAL BANKING – The power of writing Less the power of Image- Installation with variable dimensions. This work is part of a project by the artist started in 2014. He acquired in newsstands in Rio de Janeiro magazines that deal with explicitly politics, replaced the covers and jackets of these magazines reproduced with the original texts without formatting and without images and put the magazines back into circulation on newsstands. For exhibition #2015_1 Fragment Salvatore installs in the Windows of a newsstand in the center of Rio de Janeiro a series of manipulated magazines.

Lucio will also be participating in the exhibition circuit to guests of ArtRio 2015, where will receive the public who make advance reservations for a guided tour of his exhibition.

On the occasion of the exhibition #2015_1 fragment Salvatore will present for the first time to the public of the City Museum that this project developing MAC Rio de Janeiro – Museum of contemporary art of Rio de Janeiro – (www.macrio.org). 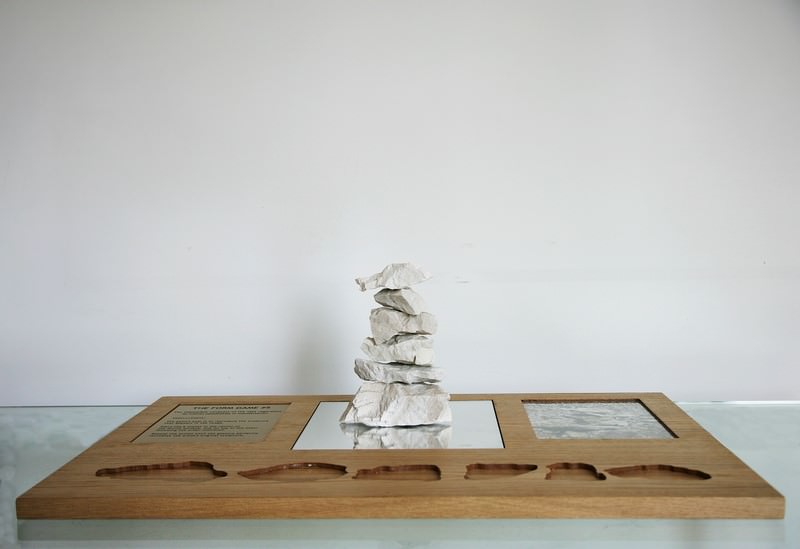 Fernando Cocchiarale (Curator of the exhibition) – Art critic, curator and professor of philosophy of art in the Department of philosophy at PUC-RJ, is also a professor at the school of Visual Arts of Parque Lage. Author of articles, texts and book reviews published in books, catalogs, newspapers and magazines in Brazil and abroad art. Was curator and coordinator of the program Rumos Itaú Cultural Artes Visuais, Visual Arts Coordinator Funarte, and curator of the Museum of modern art of Rio de Janeiro (MAMRJ), In addition to Member of numerous juries and selection committees of exhibitions and salons in Brazil. Is independent curator, being responsible for exhibitions in MAM-RJ, Itaú Cultural (SP), Santander Cultural (RS), Oi Futuro, (RJ), Paço Imperial (RJ), France-Brazil House (RJ), National Museum of the Cultural Center of the Republic (DF). Is doctor in communication technologies and aesthetics through the school of communication from the Federal University of Rio de Janeiro.