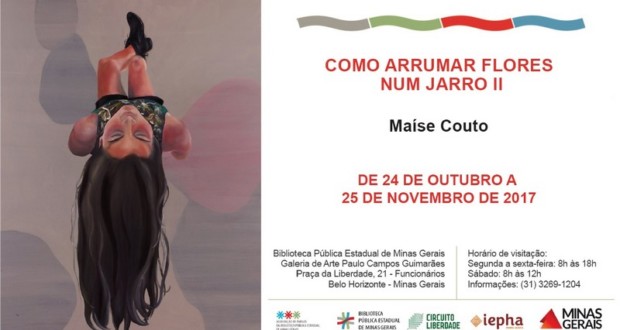 Invitation exhibition "How To Arrange Flowers In A Jar II". Disclosure.

The show “HOW TO ARRANGE FLOWERS IN A JAR II " count with 06 new works by artist Maíse Couto, on display of 24/10/2017 to 25/11/2017, on Biblioteca Pública Estadual Luiz de Bessa, located in Praça da Liberdade, 21, Employees neighborhood, Belo Horizonte, MG.


The series of works assembled for her second individual show, is the result of a survey which took place in the years 2016/2017, the result of the artist's immersion in her personal issues and the confrontation of the lonely routine and quiet Studio.

"How to get Flowers in a jar II" of Maíse Couto is a show whose conceptual starting point the epigraph of Clarice Lispector:

“[…]The oblique is very intimate life…live the richness of the Earth…Yes. Life is very oriental. Only a few people chosen by fate to chance proved elusive and delicate freedom of life. It's like knowing arrange flowers in a vase: a useless wisdom. This freedom fugitive of life should not be never forgotten: must be present as a telogen…live this life is more a remember her indirect than a live straight…Only for beginners so life becomes tenderly real[…]”

Her series of paintings delineate a pictorial universe drawn from the experimentation of a space that does not put the linearity of any known perspective, but a landscape just experienced in the free territory of poetry and painting.

The creative process of the artist is given from the blank screen problem and the resulting selection and deletion game installation in search of balance of plastic elements that cross the boundaries between figuration and abstraction.

Landscapes imagined, are usually inhabited by a child inspired by the pictures of her daughter. The symbol, embodies your own image in undefined spaces, in situations and actions that reveals remnants merged and imagination absolutely unaware, Remaking the plan their "indirect memories".

Images of fragments of memory in the making of the painting made randomly with gestural impulses fashioned in colors and shapes various. 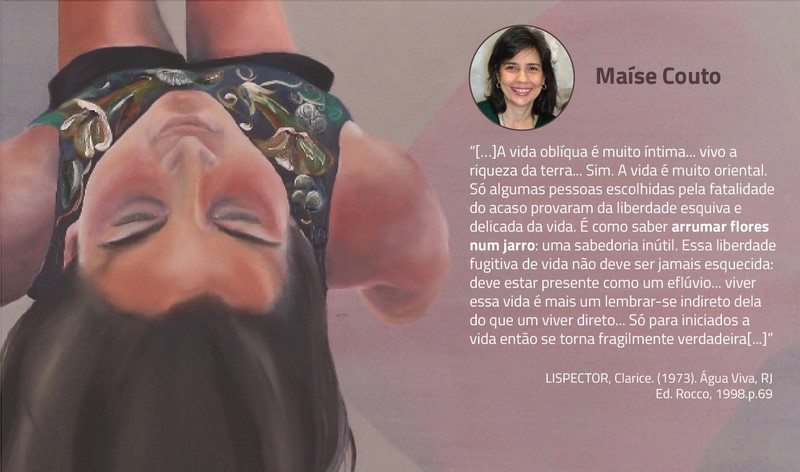 Exhibition "How To Arrange Flowers In A Jar II". Disclosure.

Maíse Couto lives and works in Belo Horizonte. Graduated in fine arts in drawing and painting from the Escola Guignard of the Universidade do Estado de Minas Gerais. Held post-graduate in still development and Cultural Management.

Presented Individual Exhibitions as, "Unspeakable", drawings, photography and installation, at Galeria Alberto da Veiga Guignard, the Escola Guignard, Universidade do Estado de Minas Gerais – UEMG, Belo Horizonte, in 2015. "How to get Flowers in a jar I", paintings. The Galeria Nello Nuno, the Fundação de Arte de Ouro Preto – FAOP, Ouro Preto, in 2017. Was selected in 2the Check program for occupation of PiccolaGalleria, the Casa Fiat de Cultura, Belo Horizonte, Brasil.

Previous: Conservatory of MUSIC has free performances this week
Next: Celebrities dress up the art of graffiti artist TOZ