behind the scenes, the process of creating and shooting masterpiece "8½", Federico Fellini (1920-1993), eternalized in the French Paul Ronald Photography, shows in unprecedented outside Italy, which includes the celebration of the centenary filmmaker genius.

MAM Rio features from the day 18 January 2020, at 4:00 pm, to exhibition "The brain (and walk) de Guido Anselmi ", bringing together 70 photo enlargements of Paul Ronald (1924–2015) - celebrated French photographer scene, which had its trajectory linked to the Italian cinema - records with the scenes of the production and filming “8½” (1963), work-thin Federico Fellini (20 January 1920, Rimini, Italy- 31 October 1993, in Rome). The photographs belong to collector Antonio Maraldi, which received them on the Paul Ronald own donation in the late 1990. 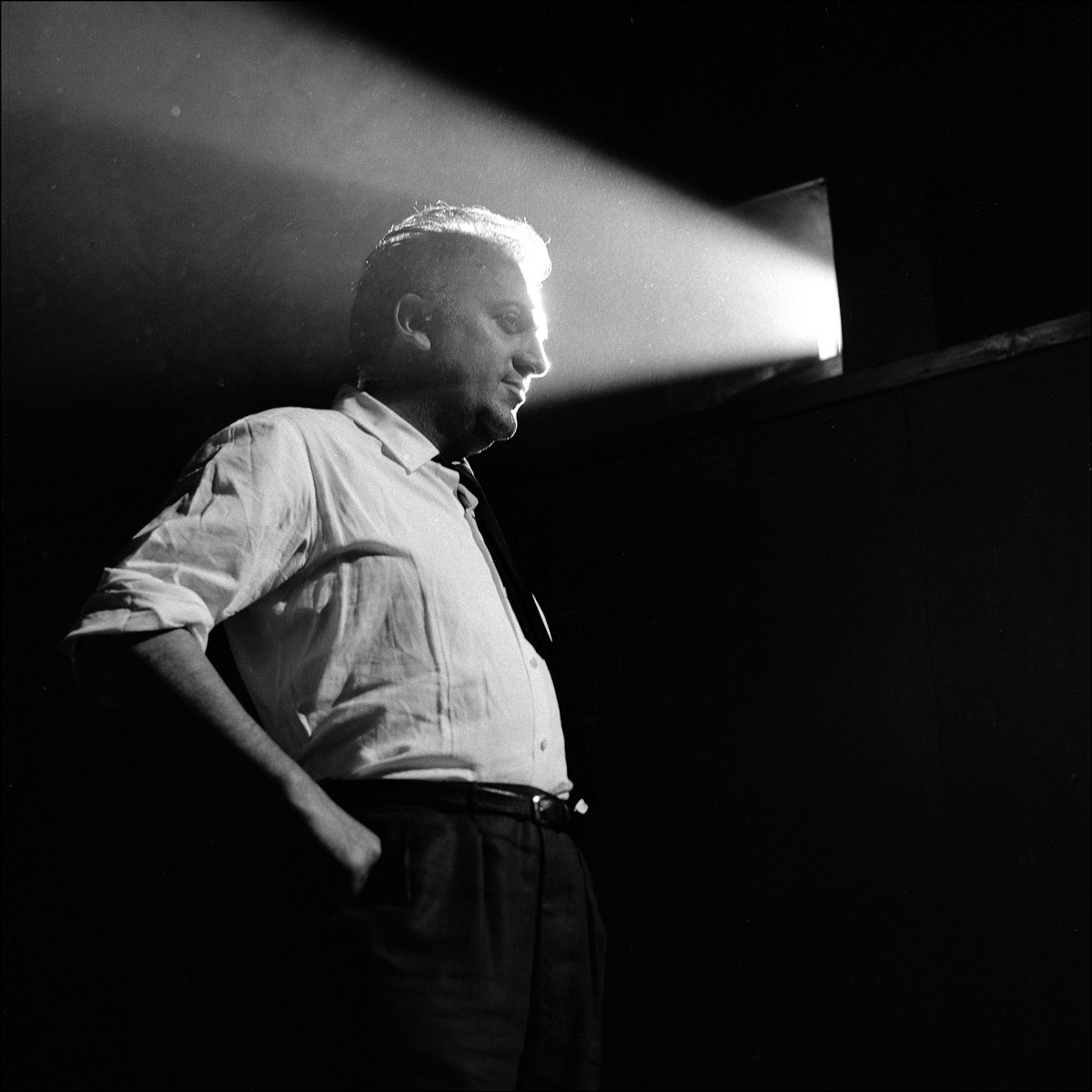 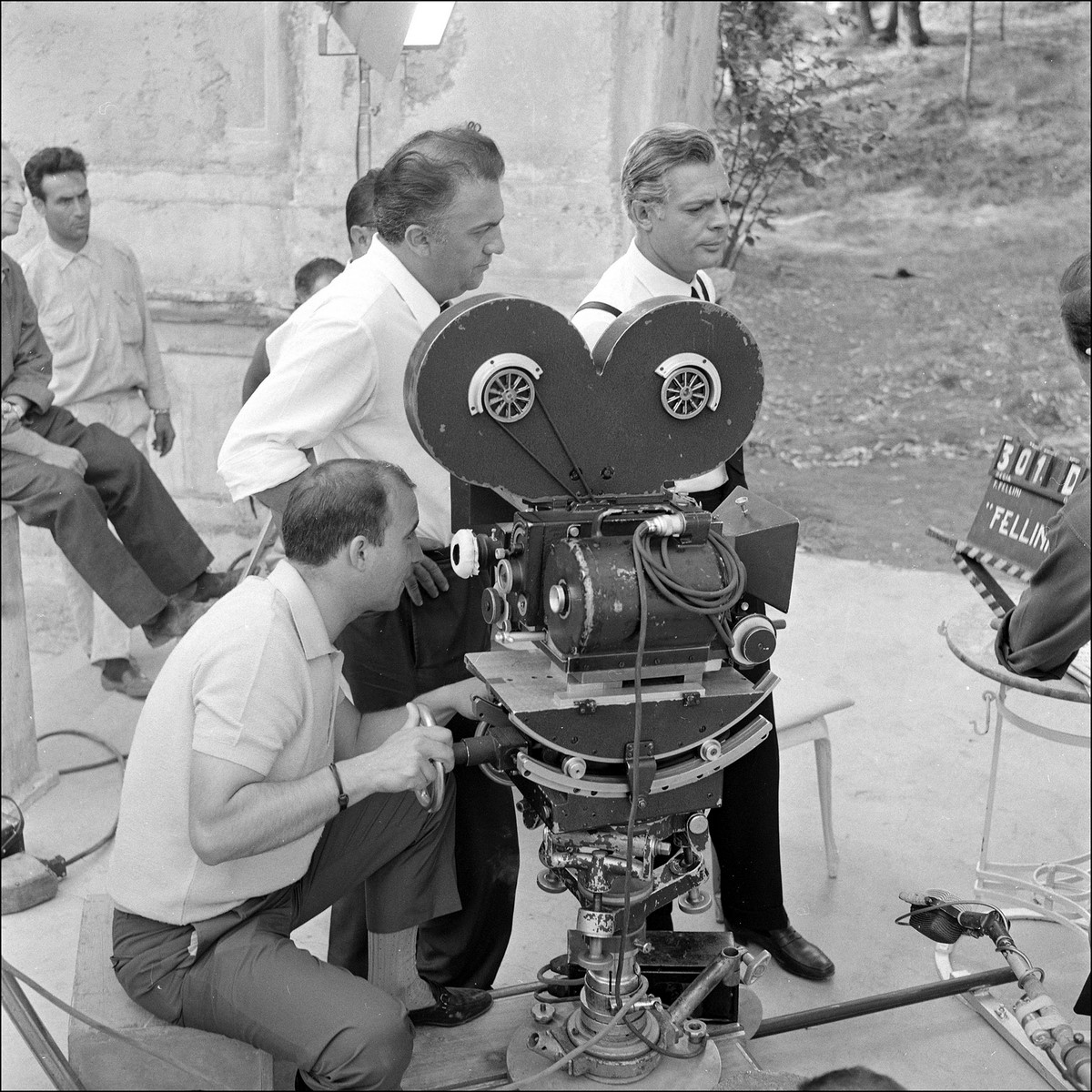 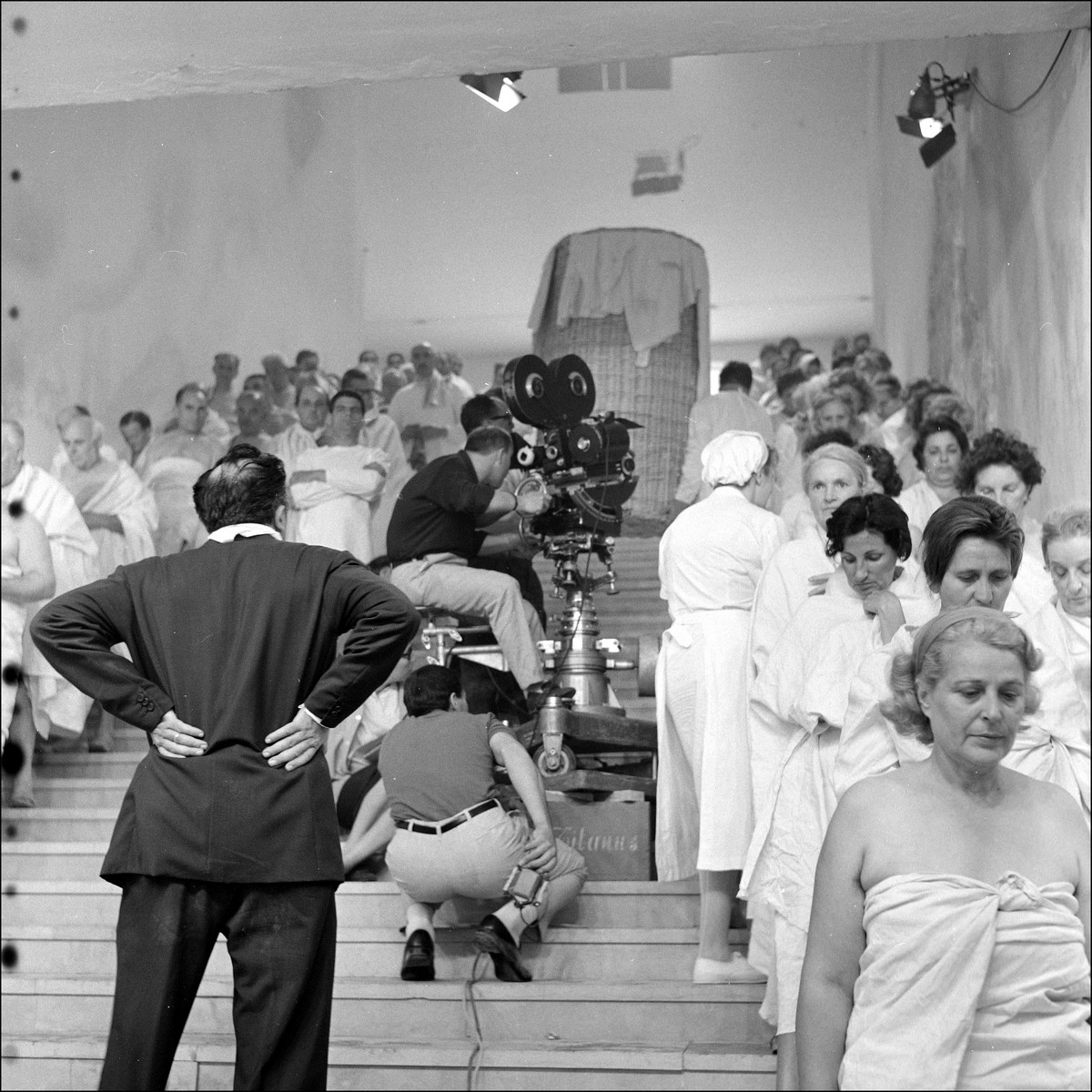 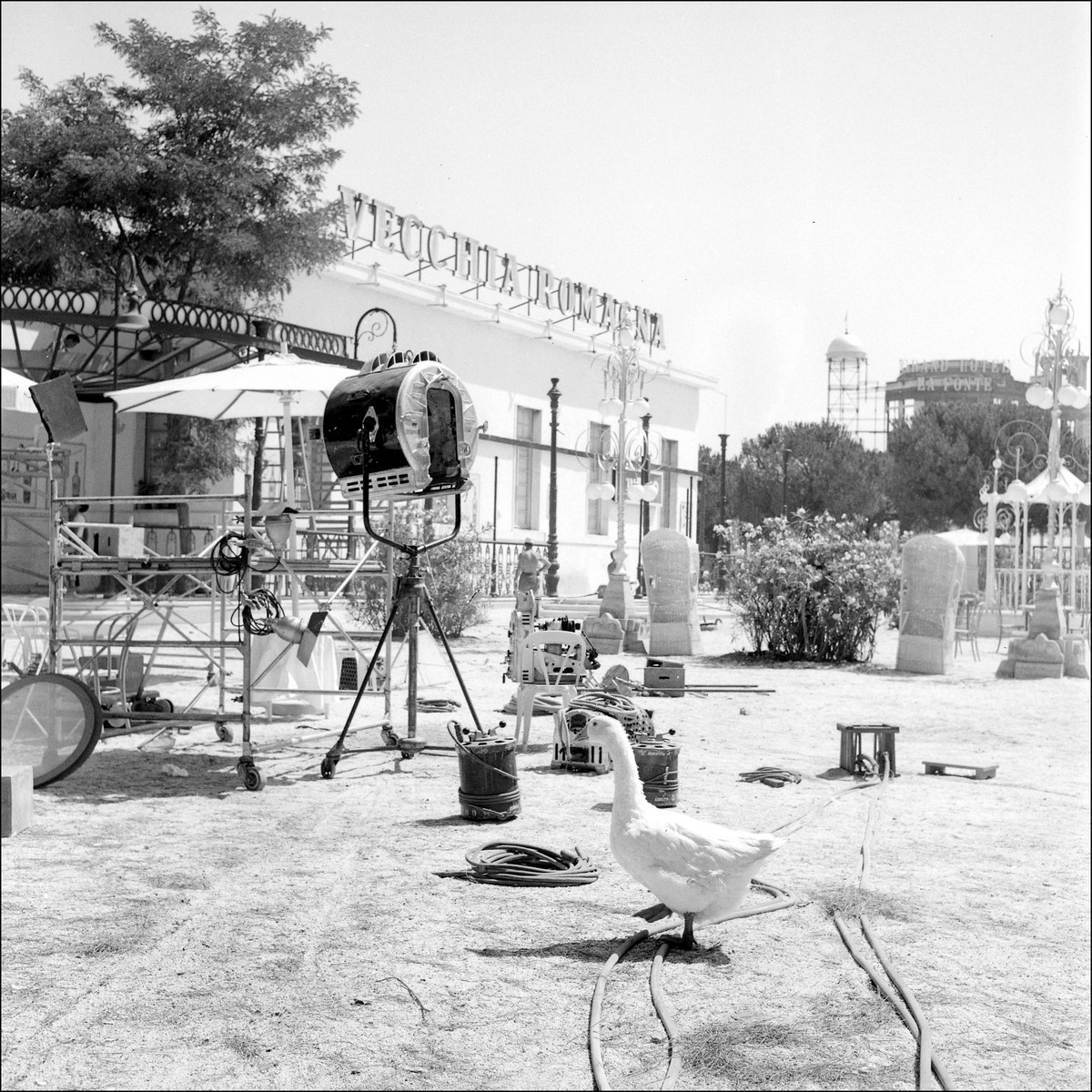 Hernani Heffner, Curator of the exhibition, He explains that the title refers to the alter ego of Federico Fellini in "8½", or filmmaker Guido Anselmi, "Whose consciousness / unconsciousness form the raw material of what you see and hear throughout the film". As 70 images were selected among 2.200 negatives that recorded the scenes of this production. "Any performing the particular circumstances, as the volume of images and closer documentation filming process are atypical even for a filmmaker who had been consolidating as 'single' ", Hernani says. "In a recent history marked by important awards like the Golden Palm for 'The Sweet Life' (1960), and a filmography memoirs, '8 ½' emerges as an expanded picture of a moment of personal crisis, because of the difficulty in directing a new film, and worldwide, due to the crisis of installed nuclear missiles in Cuba ", notes the curator. He points out that "far from being a mere casual delirium or an encrypted narrative id, '8 ½' is the definitive entry of Fellini in modern cinema, a raid around the unconventional film making, shaped by technical trials as the spherical frame (the rising ratio 1.85:1) and realization of rigor in the different sectors of production that gives us precisely account this set of photographs ". Hernani Heffner notes that "Eight and a half of film indicates that Fellini considered that had driven the equivalent of eight feature films and a half, an episode of a long ".

To Livia Raponi, director of the Italian Institute of Culture of Rio de Janeiro, "The creative genius of Federico Fellini and his work elude definitions, such is its richness and complexity: no doubt, the world that the master has created with his films became part, indelibly, the imagery heritage of humanity. In addition to representing an absolutely innovative instance of technical and aesthetic point of view and a milestone in the history of world cinema, the artist and intellectual sphere surpassed the film to become, the strength of their images and their poetic, a true ambassador of our land and our culture abroad. Italy he invented, and the characters he created through his films, today are part of our identity and also the collective imagination about our country and about the Italians in the world. It was a great pleasure to perform, by the MAM and its beautiful spaces, this initiative as high artistic and cultural value. The exhibition opens, in Brazil, a series of events organized by the Italian Cultural Institutes and the network diplomatic and consular Italian director on the occasion of the centenary, that will take place throughout the year ".

In December 2020, the material produced by Paul Ronald will be donated by Antonio Maraldi Museum Fellini, in his homeland, Rimini.

As 70 photographs displayed at MAM are enlarged and printed in black and white 70 x 70cm, from digital files obtained directly from photographic negatives. The images reveal the Fellini work process on the set, their interaction with the staff, the rest intervals, the preparation of scenarios, the direction of actors, moments of reflection and work structure in the studio and on location. Emerge as an important instrument of access to methods of creating fellinianos, as well as conditions for realization that arranged to achieve production. The look of Ronald differs from traditional work still, trampled over the reproduction of scenes as they appear in the final assembly, and photojournalism backstage, focused on the figures of the director and stars, poetically exploring the environment of the shooting and the film formation. "The hallucinatory character emanated scenarios, costumes, characters and unusual approach to the conduct of the scenes, captured at the same time the unclear creation process for the director of a film whose narrative is that of a movie under construction, show sensitivity Ronald, very adjusted to the final claims of Fellini, and the poetic beauty of his eyes to the world of cinema, metalinguisticamente revealed in pictures of the making of a film about the making of a movie ", says Heffner.

For the curator, the circumstances surrounding the genesis and realization of "8½"I would have reason to numerous investigative approaches as the importance of the work in Fellini's career and in the history of cinema. immediately awarded with the Grand Prix of the Moscow Festival and the Best Foreign Film Oscar and Best Costume Design, and other four nominations and several awards, “8½"Is to thread the difficulties of filmmaker Guido Anselmi in developing his next film. Be creative by being in crisis, to be patient and bring up images and situations, that manifest as scenes in the form of dreams, delusions, memories, imaginations, costumes and work instructions, Guido will expose their fears, impotence, contradictions and desires deeper and personal as well as this raw material is one of the bases of his artistic creation. "8 ½" entered the history of cinema “as the most important film's filmography felliniana and the work that established definitively its baroque style, surreal and very personal ".

Considered one of the top three photographers of scenes from the history of Italian cinema, junto com Tazio Secchiaroli and Pierluigi Praturlon, both also very attached to the work felliniana, Pellet Paul Ronald was born in Hyères, Southern France, in 17 October 1924. With a background in boating, He moved to Nice due to World War II and began attending the cinema environment. Know the Italian scene photographer Aldo (Aldo Graziati), which invites to work as an assistant in "Beyond life" (1943), Jean Dellanoy. After a period working as a war photographer with the Allies, finds Aldo and continues as his assistant in "Beauty and Beast" (1946), Jean Cocteau. Both start and then to Italy, called by Luchino Visconti to work on "The earth trembles" (1948), Aldo becoming a famous director of photography under the pseudonym G. S. Aldo, Ronald and starting out as a photographer scene (stillman) main. The two followed Visconti faithful to throughout his career, Ronald including having a partial credit as director of photography on "Beautiful" (1950), and doing much of the photographic records of theatrical master scenarios. establishing itself in the late 1950 as a major, if not the greatest, Photographer dinner (still) do Italian cinema, Ronald works with the leading names in this and the following decades as Blasetti, Genina, Ferreri, Cavani, Lattuada, Risi and mostly Scola, after Visconti. It also operates in the same role in international productions like "Beat the Devil" (1953) e “The Bible: in the beginning…” (1966), de John Huston, e “Waterloo” (1970), de Sergey Bondarchuk. for Fellini, faz to photograph de cena de "8 ½" and do episódio "The Temptations of Doctor Antonio", de "Boccaccio '70", Both shot in 1962, that considered one of his masterpieces. His last film work was "forbidden Dream" (1993), de Franco Zeffirelli. Paul Ronald died in 13 January 2015 Kids Gad, Southern France.