Performance-installation author at Parque Lage brings the site of emotion against their parents, Ruth Casoy and Sergio Bernardes

The history of Mana Bernardes author begins at Parque Lage. It was there that his mother, the poet and art therapist Ruth Casoy, He received the unusual his father's invitation, filmmaker Sergio Bernardes, to wear a jumpsuit full of bells and dance in a hall of mirrors for the scene in "Madripérola". Nine months after the recording was born visual artist and writer, that chronicles the meeting in his book "Rites Sunrise to Farrow". Now, Mana returns to this place so special in his career to sign his work during the Sustainable Turnaround, at 3:0 pm, on 19 October.

Mana wear Ruth parent, central figure of the book, two paper dresses joined by a huge skirt 30 meters, made of recycled Tyvek of a scenario created by her to a theater show. No big dress, the author's manuscripts in his notebook over a thousand pages make a burgundy color, Printing with ink made from beet, and great bar skirt strings turn into scars, in umbilical cords. no center, Ruth and Mana start reading together the skirt parent. Men and women guests hold the strings and alternate their seats, chagando the center to take on the role of reading in performance-procession, followed by the musician Thiago Queiroz, artist's brother. The group performance begins in the French Garden at 16h, and will come out in procession to reach the edge of the pool, where the dress will be built and will be exposed to the public during the event.

"The Parque Lage, as the beginning of the book narrative space, it is as literal and literary space to house this dress. And it makes the audience can experience the amalgamated and garranchadas words originally written notebooks that are stamped on it. We live the failure of a society without ritual, everything is trivialized in continuous transfers of the lack of contemplation spaces and philosophy on life and its passage. Exhibiting for the first time the dress "Rites from sunrise to give birth" is to make the space of Sustainable Turnaround is the occupation of this ritual culture and dynamic relationship ", famous Mana. 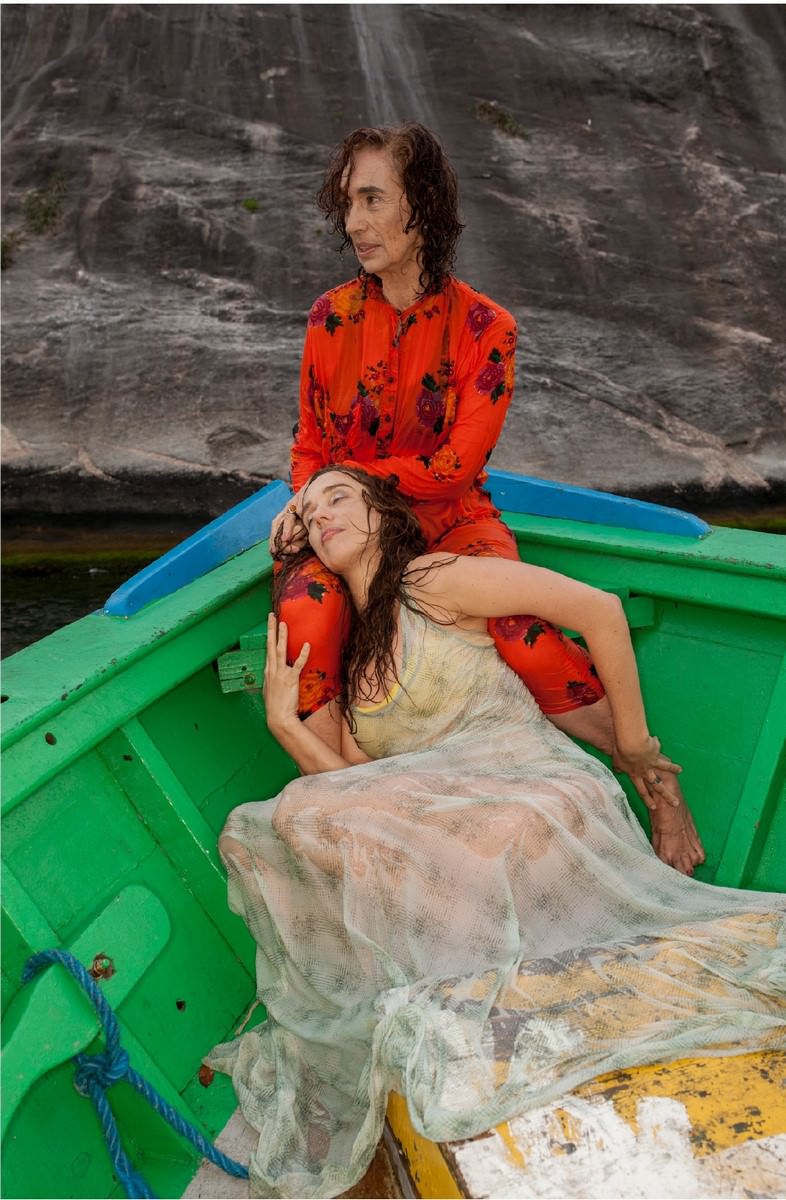 On "Rites Sunrise to Farrow"

It was from the decision to be a mother and her desire to create Mana Bernardes, a flight between Rio and Portugal, begins to write "Rites from sunrise to give birth" (Bazaar launch of Time publisher). The first 30 handwritten pages that occasion turned into more than a thousand, taken by the handwriting that is characteristic of his visual artist working. And this intimate tone, who plunges into its own history and overflows in notebooks leaves, Mana gives prominence to his mother Ruth, a poetry autobiography, far from being a book about motherhood and the idealized relationship between mother and daughter, friend and wife.

Finalized, "Rites from sunrise to give birth" has 376 pages, in which Mana recovers childhood episodes, the charms and mishaps in a nonlinear creation, to understand her place as a woman in the world today. Separation from parents, the constant changes of schools and cities, an accident born of guilt, a serious illness, the weight of early demand for autonomy, abuse, the discovery of sexuality and love, the work, marriage - which in his narrative turns excess life. The Mana's story is unique and universal, causes an automatic identification on the player. The way recounts have own rhythm and vocabulary, Packing this conversation drawn in small episodes. Are 95 rites which can be read continuously or independent fashion.

"With the removal of the veil, I myself would never dare do, what you read can sometimes fascinate, and other hurt, generate revulsion. What matters is that we are always, despite the facts, interlocutors, in constant provocation. When we speak or remain silent, angry or tenderness. We continue ", Ruth points Casoy, Ruth parent, Mana as often refers. Tortured during the dictatorship, carrier silences and mysteries, Ruth is the character who leads the narrative. Mana writes about her mother to be able to rewrite the relationship of the two women and the ancestry of his mother's family, of Ukrainian origin. In this self path and reunion with a new feminism, she discovers the many possible births and rebirths when we look in front of ourselves.

" 'Rites from sunrise to give birth' is a radical act of resistance and opposition to the current trivialized and institutionalized barbarism in which we live. Because it is fruit of the genuine exercise of 'pay attention'. To look for whole and let the whole look closely given full. And because Mana memories reveal your attention, from very young, especially to the beauty and importance of fragile things. And they inspire us poetically to 'pay attention'. This is not a book about motherhood. Far from it. Nor documentary autobiography from the incredibly cinematic events that she lived. (…) The book of Mana is a call of humanity ", says Maria Duarte, production director of the release performance of the book.