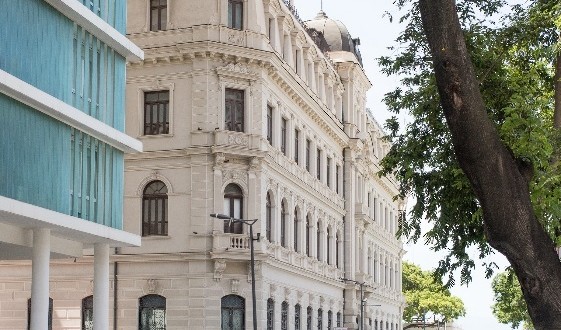 The street and the possible uses of the city
23 September, das 10h às 18h
Free

The Art Museum of the river-SEA, under the management of the Institute Odeon, will be the scene of another edition of the MAR program afloat, created to House various cultural events of the city and to promote the dissemination of the diversity of Rio de Janeiro. Throughout the day will happen to food and craft fair with MAWON refugee Association, in which visitors will be able to experience and try out the different cultures, In addition to a vast programming that involves music presentations, dance and chat.

The 2:00 pm to 4:00 pm, a conversation wheel to put on the agenda the cultural uses of the Street through different narrative points. The meeting will bring together the Congolese refugees Yves Abdalah Makangua-chemical engineering student who lives in Brazil since 2010 -and the Haitian Robert Nalini – producer and cultural musician that changed your country of origin after the earthquake that devastated the island in 2010 -the producer and cultural activist in organizations the wheels of rhymes and MC Battles & #8217; s, Dom Negroni, and the architect Pedro Riveira, that is part of a global network of laboratories for thinking about the future of the cities of Columbia University GSAPP. The debate will discuss the occupation of the city in different ways with fairs and activities in public spaces-relationship that is not always free of conflicts.

To animate the pilotis of the Museum, from 10:00 to 12:00 the DJs Bob Selassie and Doggie lull visitors with a vast repertoire of Latin music, Caribbean, Brazil and Africa. At 12:00 there will be presentation of the Congo Folklorico group. At 1:00 pm, the band Commodore takes the stage in a presentation with about of 1 hour long. At 4:00 pm musical programming returns with the band and Nomad Factory, to end the day, the duo Chico Chico and John Mantuano if present from the 5:00 pm.

Guest speakers from the sea surface:

Young Congolese refugee living in Brazil since 2010, Chemical engineering student, humorist, dance teacher, is a member of the Association which promotes diversity Mawon, connection and integration of immigrants in brazilian society through culture and gastronomy.

Cultural producer, Musician, Founder of Mawon Haitian who came to Brazil shortly after the earthquake in 2010. Promotes integration, diversity, connection and mobility of migrants around the world without borders.

Master of ceremonies of Urban art events all over Rio de Janeiro, is one of the producers and cultural activists in organisations of the wheels of rhymes and MC Battles & #8217; s.

Architect with a Masters degree in urban design at PROURB. Partner and Director of Architects Street Studio-X River, that is part of a global network of laboratories for thinking about the future of the cities of Columbia University GSAPP.

Cultural Producer, Master's in grad school in culture and Territorialities of the Fluminense Federal University and a Bachelor's degree in History with an emphasis on Contemporary cultural history from the Fluminense Federal University. Currently working on production of Art Museum of Rio. Is developing content and research in the field of urban cultures of the city of Rio de Janeiro.

A true exaltation to the cultural plurality, the fair gathers gastronomy, music and culture of different migrants who have chosen Brazil as home. The schedule also features a rich debate on migration with the presence of Yves Abdalah Makangua, Robert Nalini, DOM Negroni and Pedro Rivera. The musical part, the brazilian band, Nomad Factory Soundtrack, the folk dance of the Congo and the Haitian DJ Bob Selassie brand presence. The Diversity fair, In addition to entertain, aims to connect people, languages and cultures.

The "marronage" was a movement that made history in Haiti, for being the first collective mobilization of the revolt for freedom (14 and 15/08/1791), It started with the escape of slaves. Inspired by this force, in 2017 the MAWON, an organization that advocates the construction of a world without borders. The actions promote human mobility, cultural diversity, the connections between people and the integration. The MAWON aims to promote the rights and integration of vulnerable migrants in the host society through an approach and a joint based on education, culture and art.

A MAR It is a space dedicated to art and visual culture. It occupies two buildings on praça Mauá: an eclectic style, which houses the Exhibition Hall; other modernist style, Look where the school's work. The architectural design unites the two buildings with a fluid concrete cover, which refers to a wave - a trademark of the museum -, and a ramp, where visitors come to the exhibition spaces.

An initiative of Prefeitura do Rio in partnership with Fundação Roberto Marinho, the sea has activities that involve collecting, registration, search, preservation and return of cultural property to the community. Proactive support space education and culture, the museum was born with a school - the School Look -, whose proposal is innovative museological: foster the development of an educational program of reference for actions in Brazil and abroad, combining art and education from the curatorial program that guides the institution. The sea is managed by the Odeon, a social organization of culture, selected by the Rio de Janeiro City Hall for public notice. The Museum has the Grupo Globo as maintainer, the BNDES as a sponsor of Technical Reserve, and the Repsol as a supporter of exhibition.

The school look has the Fecomercio System RJ, through the Sesc, institutional partner, and account with Banco Votorantim and Prodiel as supporters. Brookfield supports educational visits. The MAR program at the Academy has support from Dataprev and Amil One Health via Municipal law of incentive to culture, Aliansce's and via Rouanet law.

Previous: Project "Friends of art-2017" in MIAMI of Christina Caruso
Next: Event features Italian cuisine influence in the culture of São Paulo