Home / Art / SEA at the Academy 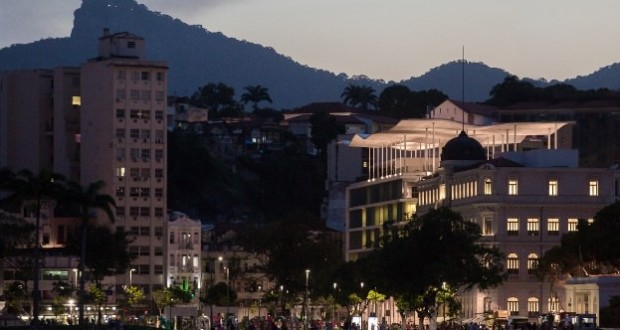 SEA at the Academy

Eros and Dionysus: love and sexuality in contemporary culture

The Art Museum of the river-SEA, under the management of the Institute Odeon, receives the international seminar "Eros and Dionysus: love and sexuality in contemporary culture "between 14 and 16 September. The project is a realization of the Fluminense Federal University (UFF) in partnership with the Federal University of Rio de Janeiro (UFRJ) and the Museu de Arte do Rio, through the School Look, and aims to promote an interdisciplinary meeting to discuss certain historic transformations that have been taking place in the field of love and sexuality, In addition to reflect about the Eroticism in contemporaneity from the mythical figures of Eros and Dionysus. To administer the conferences and participate in the debates were invited researchers from varied backgrounds, among them Maria Cristina Franco Fernandez, Alexander Marin, Brigitte Vasallo, Fernando Santoro, Ercole Lissardi, Peter Pál Pelbart, Christian Ferrer, Ieda Tucherman, Larissa Store, Hilan Bensusan Burmese Joel.

In the last decades, a whole range of changes come by changing the ways people link to the other in terms of affection and sexuality, a broad subject and of great interest to several areas of knowledge, with special focus on Communication, in dialogue with anthropology, the psychology, the philosophy and the arts. Therefore, in order to enrich the dialogue and the thought on the subject, invited researchers, both domestic and foreign, that come reflecting about these thought-provoking questions boldly.

The opening of the seminar will be conducted by researcher, with three post-doctoral researchers in Berlin, author of several books and Professor of ECO/UFRJ, Maria Cristina Franco Fernandez, that will address the theme "Eros, pores: skin and desire ", and will feature the participation of dancer Laura Samy you will make a brief choreographic intervention at the end of the Conference. Soon after, the doctor of philosophy from UFRJ and professor of the school of education at the same institution, Alexander Marin, talk about the influence of Dionysus in the works of Nietzsche and of how culture comes outlining other ways of dealing with the affection, reconfiguring the meaning of love and friendship. At the last Conference of the day, writer and activist Brigitte Vasallo make an analysis of monogamy in the European context and its impact on State-building. After, will be held a cocktail party to launch and sale of books.

On the last day of the international seminar, the a post-doctorate at Ircam (Centre Georges Pompidou) and Professor at UFRJ, with experience in the field of Communication, Ieda Tucherman, make an analysis of contemporary relations marked by anxiety, insecurity and the lack of flexibility which are supported by a culture of loyalty and eroticism reinforced by advertising. Have the doctor and Professor at Unesp, Larissa Store, He will speak on the topic "contemporary Masculinities: negotiations of wishes in mobile applications "from a research on contemporary masculinities, technologies and affections, with a focus on mobile applications for two romantic relationships/sex, in which acted as collaborators a set of men born between 1945 and 1986.

Post-doctorate at Laboratoire de Psichopathologie et Psychanalyse Fundamentale (Université Paris VII), author of several books, Professor and researcher of UFRJ, Joel Birman, will seek in their Conference to relate the narcissistic contemporary subjectivity expansion with increasing arrogance, from a rapprochement between Freud and Foucault's reading on liberalism. To finish this edition of the sea at the Academy, the philosopher, Doctorate from the University Of Susse and performer, Hilan Bensusan, It will address the theme "Erotex and Dyonisina: love and sexuality in contemporary pharmacy ".

SEA at the Academy:

International seminar on Eros and Dionysus: love and sexuality in contemporary culture

14h to 2:30 pm – Introduction: Welcome to the sea and General presentation of Paula Sibilia.

15h45min at 4:45 pm – The Dionysus extemporaneous of Nietzsche > Alexander Marin

14h to 3:00 pm – Eros and Dionysus: in search of a philosophy in delirium > Fernando Santoro

15h15min at 4:15 pm – Western Eros: between the sweet and the fáunico paradigm > Ercole Lissardi

17h45min at 7:00 pm – Labyrinth for two: technologies of love and lovelessness > Christian Ferrer

14h to 3:00 pm – The anorexia of the engagement and the eroticism kit > Ieda Tucherman

The sea is managed by the Odeon, a social organization of culture, selected by the Rio de Janeiro City Hall for public notice. The museum has the Globe Group as maintainer, the BNDES as exhibition supporter, the Ita as copatrocinador of Leopoldina, Princess of independence, of Arts and Sciences, and j. p.. Morgan as supporter body language carioca [the Vertigo of the river]. The School has the Fecomercio System look RJ, through the Sesc, institutional partner. It also has the support of Banco Votorantim and Grupo Libra as supporter of educational visits, and Accenture and the new River as supporters of the SEA at the Academy via Municipal law of incentive to culture. The project Sea of Music receives support from TIM via State law of incentive to culture and the Souza Cruz is the copatrocinadora Sunday at sea. It also has the support of the Government of the State of Rio de Janeiro, and implementation of the Ministry of culture and the Federal Government of Brazil through the Federal law of incentive to culture.