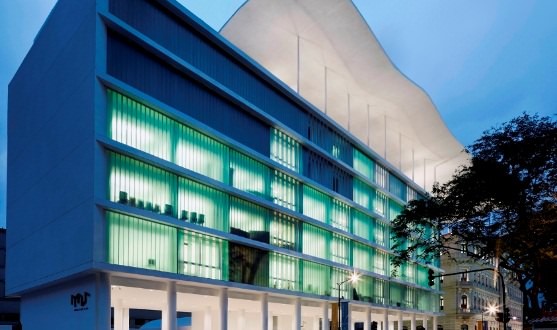 The Art Museum of the river-SEA, under the management of the Institute Odeon, performs, Look through the school and in partnership with DOW, the Sustainability seminar, Education and Art. The program involves workshops, conferences and lectures that cover topics such as circular economy, recycling, art and nature.

Between the days 2 and 4, from 10:00 to 1:00 pm, it happens Design Workshop for Artists and Artisans Tatiana Silva Dutra and Rey, Studio Mana Bernardes. already 3 to 6, the collective-Mobile Observatory researchers-artists hold a series of interventions involving the SEA activities and the territory in which the museum is housed. In celebration of the International Day of People with Disabilities, in 3 of december, at 11h and 15h, the story The Tree of Tamoromu It will be told by SEA educators exploring every way - and interpreter in Pounds.

On 4, às 14h, Julio In Natal, Tania Braga and José Miguel Casanova talk about carbon emissions and sustainability in the Olympics, under mediation Leno Veras, the conference Sustainability and circular economy. Then, at 3:30 pm, the theme Circularity: processing by art processes and educational It will be discussed by Aline Mendes, mana Bernardes, Yara Castanheira and representatives of the Center-Mobile, mediated by Karen Aquini.

On the last day of conference, 5, às 10h, Robson Borges, Luisa Santiago Lara and Thomas put under discussion collaborative processes, circular economy and the challenges for the city, mediated by Janaina Melo. at 11:30 am, It happens one of the highlights of the program: the artist Marilko Mori presents the Art and Nature project, which will be developed in Rio de Janeiro in 2016. Already from 14h to 18h, the stilts receive Fair Trade with SEA Neighbors, putting into practice the concepts of reuse and circularity of items that would otherwise be discarded.

A Sustainability seminar, Education and Art It is open to the general public and is free subscriptions through the Rio Art Museum site: www.museudeartedorio.org.br.

A Dow (NYSE: Dow) combines the power of science and technology to passionately innovate what is essential to human progress. The Company produces innovations that extract value from the intersection between the chemical sciences, physical and biological, helping to solve the world's most challenging problems, the need for potable water, the generation and conservation of clean energy and increase agricultural production. Leading portfolio and integrated areas of Dow Chemical Specialty, Advanced materials, Agricultural sciences and plastics businesses delivers a broad range of solutions and technology-based products to approximately 180 countries and in high growth sectors such as packaging, electronics, water, and agriculture coverings. In 2014, Dow had annual sales of more than US $ 58 billion and employed approximately 53.000 employees worldwide. The more than 6.000 the Company's product families are produced in 201 plants in 35 countries around the world. References to “Dow” or “Company” mean The Dow Chemical Company and its consolidated subsidiaries, unless expressly noted otherwise. More information about Dow can be found at www.dowbrasil.com and www.dow.com.

The museum has the Globe Group as maintainer, sponsored by BG as Brazil maintains, In addition to Souza Cruz and Itaú as Co-sponsors, Dow as supporter of look and Brookfield as supporter of Educational Visits. It also sponsored the Braskem by means of the law of incentive to the culture of the State of Rio de Janeiro, with the support of the Government of the State of Rio de Janeiro, and the Ministry of culture and the Federal Government of Brazil through the Federal law of incentive to culture. The management is left to the Odeon Institute.

Design Workshop for Artists and Artisans

The workshop aims to suggest techniques for the construction and completion of objects and previously idealized craft products with the introduction of design perspective.

The collective-Mobile Observatory researchers-artists develop, in collaboration with the School Look, actions and interventions involving activities in the SEA and the territory where the museum is housed

Storytelling - The Tree of Tamoromu

From the sustainability issue and to celebrate International Day of People with Disabilities, MAR educators hold a storytelling to be apprehended by the senses. From the Indian legend of Tamoromu tree, reflections will be raised about the importance of caring for and preserving nature.

The activity will feature interpreter in Pounds.

collaborative processes, andcircular conomy and challenges for the city

Presentation of the project Art and Nature, which will be developed in 2016 in Rio de Janeiro.

Building sculptures with objects already in disuse, thinking to children about consumption and shelf life of things.

Mariko Mori is a renowned Japanese artist who lives and works in New York. He gained notoriety with his interactive installation Wave Fuo, displayed in Austria 2003. The work was still in New York and at the Venice Biennale 2005. The exhibition Oneness He opened the Groniger Museum, in the Netherlands, passing also from Denmark and Ukraine. In 2011, the show went through Brasilia, Rio de Janeiro and São Paulo. The works of Mariko Mori are in the permanent collections of the Guggenheim Museum, in New York; in the Pompidou Center, in Paris; the Prada Foundation, in Milan; the Museum of Contemporary Art Chicago; not Israel Museum, in Jerusalem; among others. Won major awards, as Honorable Mention at the 47th Venice Biennale in 1997 and, in 2001, as an artist and researcher of contemporary art from Japan Cultural Arts Foundation.

Network leader Circular Economy Brazil 100 (CE100 Brazil), da Ellen MacArthur Foundation, which brings together companies, governments and academia in a pre-competitive platform disruptive innovation for the circular economy. It was strategy consultant and sustainability for seven years, working on projects in various industries and sectors (governments, third sector, development cooperation), with a strong focus on innovative approaches to the construction of a new sustainable economy and circular.

The collective appears as research group Arts Center at the State University of Santa Catarina (UDESC). Through interaction with local communities and the observation and analysis of these spaces, seeks to activate its importance as a basis for political activity and cultural affirmation, promoting sustainable relationships with the landscape and the different forms of life that exist within the city.

Providence Hill resident, and develops the project Sustainable Providence, which aims to promote awareness of the sustainable development of neighborhoods, the cities and life. Having garbage focus, the project proposes a redefinition of discarded materials, operating with the concept of transformation.

He studied a Masters in Media, Communication and Cultural Rights with emphasis on teaching practices for inclusion and diversity at the University of Kassel (Germany) and the Institute of Education, University of London (England). With extensive experience in cultural projects and media and art education for children and youth, Yara is currently Education Manager of the Institute Inhotim.

Professor at the National Autonomous University of Mexico, Casanova is director of Media Seminar, manual author Grammar drawing 100 lessons and retrospective book Hidden Agenda. The artist has participated in more than 100 group exhibitions on four continents.

social entrepreneur, Weaver networks by vocation, and business consultant aware, Thomas is co-leader of the System B Brazil (Company B move), founder gives Goma, collaborative ecosystem of social entrepreneurs and Global Shapers Hubs of Porto Alegre and Rio de Janeiro. companies with a master administrator in digital communication, expert on collaborative and sustainable economy, Thomas also serves as a director of Coca-Cola Brazil Institute and is a professor in social innovation courses in Brazil. In the beginning of 2013 He was invited to the annual meeting of the World Economic Forum in Davos in Switzerland, to talk about technology for social innovation and collective funding.

Technology and Sustainability Manager for Dow's Olympic Operations for Rio 2016. Julius still leads the Carbon Mitigation program for the Olympic Games Rio 2016, which is part of Embraces, Rio's sustainability platform 2016. He also leads projects to maximize the Dow business opportunities related to the sponsorship of the company to the Olympics.

General Manager of Sustainability, Accessibility and Heritage River Committee 2016 It helps to implement "sustainable thinking" throughout the planning of the Games. Degree in economics, with a Masters in Environmental Science from USP and a PhD in Applied Economics from Unicamp, it presents an overview of your area, who now lives a turning point.

Is the Education Manager of Rio Art Museum/School the look – SEA. Was curator of art and Cultural education Inhotim, Brumadinho [2007-2012], teacher of art criticism of the Guignard school UEMG [2010-2012] and coordinator of Visual Arts of the Pampulha Museum [2004-2007]. Curator of the project open Atelier Guignard school UEMG [editions 2010-2012]. He was curator of the exhibition program of the first edition of the artist residency project JACA, Nova Lima, MG [2010] and curatorial Assistant of the program Rumos Itaú Cultural of Visual Arts [2008-2009]. Has texts published in books, catalogues and magazines.

Specialist Text Production Critics and media diffusion of Arts by the National University Institute of Art (Argentina) and Master of Aesthetics and Narratives by research line in Image and Graduate Program in Sound Communication and Society at the University of Brasilia. Coordinated international cooperation projects for knowledge transfer in social protection as Communications Advisor, Disclosure and Argumentation of the International Policy Center for Inclusive Growth of the United Nations Development Program (IPC-IG/PNUD), articulating partnerships with institutions such as the Ministry of Foreign Affairs (MRE), Ministry of Social Development (MDS), Institute of Applied Economic Research (IPEA), French Development Agency (AFD), Australian Aid, UN Foundation for Agriculture (FAO) and Food and the United Nations Fund for Children (UNICEF) and World Bank.

Previous: Winners of the Photo Contest Prix Photo Web French Alliance 2015 will be announced on the day 02 December
Next: Samba national day will be celebrated on Wednesday in the mouth Fucking