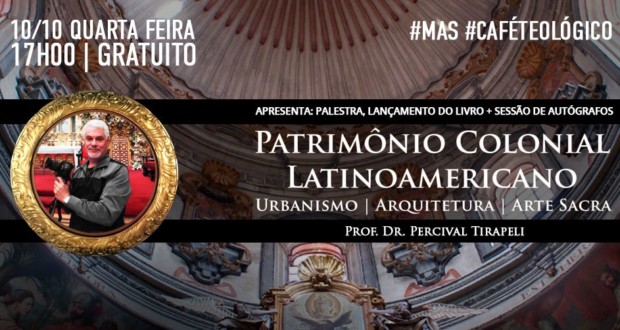 this coffee, see how years of research can generate an interesting and full publication - in text and pleasant and attractive images to anyone. Percival Tirapeli, after devoting part of his life through the cities, settlements, Monasterios, cathedrals and rural chapels forgotten in Latin America, has just published its panoramic interpretation of the two Americas, Spanish and Portuguese. The spirit of the Baroque was one of the common denominators between the artistic production of the two Americas, and he dives into the theories of this style in their sensory descriptions of places of worship "The look leads to emotion. Between rational criticism and the delight of pure visuality, succumbs on the latter.

This is one of the functions of Baroque art: move the faithful body weight and toss it to the immateriality of the flight ", the firm. This description of religious spaces and ornamental elements, We imagine the architecture and the artistic elements as if we were watching and covering the spot. As stated by Victor Hugo in his preface Mori, read the book "is to find the dense scientific narrative those times, that for involuntary oversight, the competent teacher is replaced by the human figure - Percival – artist and poet ".

The researcher toured the World Heritage sites from Mexico to Patagonia, in 8 years of comings and goings in the largest squares of old Latin American capitals - former vice reigns of New Spain, new Granada, Peru and Silver, where the palaces of government, cathedrals and episcopal palaces. The religious orders - Augustinians, Dominicans, Mercedarians and Jesuits - have given us the most beautiful churches of Colonial America as well as the chapels of women's monasteries, and, in the cities of Potosi and mining as Ouro Preto, the artistic legacy is unsurpassed, with spontaneous planning.

All this content and your organization in this book will be presented Theological Coffee with signing.

Percival Tirapeli, 1952 (Nhandeara, SP) History is full professor of Brazilian Art of the Paulista State University Institute of Arts, UNESP, master and doctor by ECA/USP. He is the author of more than 20 books on the subject, with emphasis on the baroque and painting. published Architecture and Urbanism in the Paraíba Valley, Issues SESC / UNESP,2014, São Paulo - Arts and Ethnic Groups, 2001, Official Press of the State / UNESP, same publishers Colonial Arte Sacra: Baroque living memory (org.,2001) and Pauline churches: Baroque and Rococo, 2003, Sergio Milliet Award for best research in the arts by the Brazilian Association of Art Critics, ABCA. by Metalivros, The most beautiful churches of Brazil (with Wolfgang Pfeiffer, 1999), Heritage in Brazil (2000), Faith Parties, (2003). Baroque churches of Brazil (2008). By Art Integrated / UNESP, I and II Sacred Heritage in Latin America (2015 and 2017). I do not prelo, Art of the Jesuits in Latin America (Edições Loyola, 2019). As curator of exhibitions and author of catalogs: Sacred Art - genesis of faith in the New World (Bandeirantes Palace, 2007), fragments: collections of Rafael Schunk and Sacred Art Museum (BUT) of São Paulo (2016), Baroque oratorios on Cristiane Collection and Ary Casagrande and Sacred Robes (both 2011), not all MAS. He has given lectures on Brazilian art in Seville, Carmona, Burgos, Salamanca, Santa Cruz (Tenerife), Lisboa, Rouen, Bergen, Mexico, Bogota, Ahmed, and numerous conferences in Brazil and abroad. ABCA was the vice president and director of special projects at the ICOMOS / BRASI, and is the holder of the Artistic Advisor of Palaces of São Paulo Government and CONDEPHAAT. As artist participated in two International Biennials of São Paulo (1977/1985), and his biography is published in: Art Art - testimonies in the work of Percival Tirapeli (Integrated Arts, 2015). In 2018 published Colonial Latin American heritage, the SESC Editions.

Previous: Abreu Fabiano advocates the use of social networks and states that we need to adapt to new technologies
Next: #MAS promotes Free Course: “Introduction to Art History: From the Renaissance to the Vanguards”