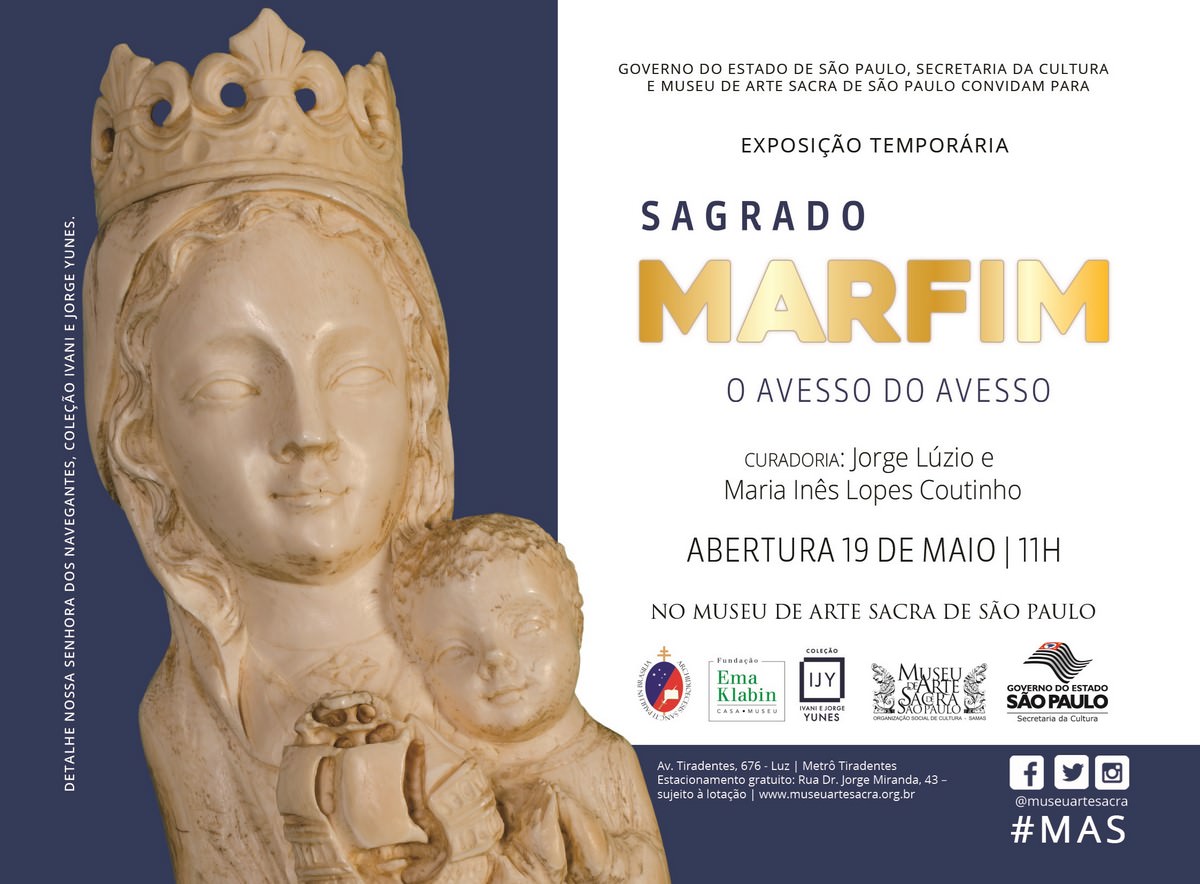 Exhibition "Sacred Ivory: The reverse of the reverse "the MAS. Disclosure.

“Sacred Ivory - The reverse of the reverse” highlights the historicity of pieces that date back to antiquity, the African and Asian arts and the artistic and liturgical objects in medieval and modern Europe

A Museu de Arte Sacra de São Paulo – MAS / SP, institution of Department of culture of the State, inaugurates “sacred Ivory: The reverse of the reverse“, under the curatorship of Jorge Lúzio and Maria Inês Lopes Coutinho. Composed of fifty-three pieces belonging to the collections of the MAS / SP, Ivani collection and Jorge Yunes and Foundation Ema Klabin, the show proposes rethinking the use of ivory in works of art and its development iconographic, highlighting its historicity dating back to antiquity, the African and Asian arts and artistic and liturgical objects in medieval and modern Europe - which reverberates in the productions found in many societies interconnected by the colonial system.

Rare artworks, of various sizes, with copies of the seventeenth centuries, XVIII e XIX. From a historical perspective, this new show Museu de Arte Sacra de São Paulo It was designed in order to stimulate multidisciplinary dialogues with Social History of Art, Anthropology, Museology, the Afro-Asian Studies, Environmental History, the Heritage and Sacred Art. In the words of José Carlos Marcal de Barros, Executive Director MAS / SP: “According to the Old Testament, King Solomon sent to bring ivory Tarshish, in East routes. Fídias, the incomparable artist Greek, used ivory in one of the most important statues of ancient Greece, the Athena Parthenos, to honor the goddess on the Parthenon. And in more recent times, the magnificent Demetre Chiparus used metal and ivory in their unquestionably beautiful figurines. The most famous works are called criselefantinas bronze and ivory. So rich and old is the use of ivory works of art exhibition wishing to present their story would be virtually impossible“.

In relations between the metropolis and its colonies, as well as in intracoloniais and intercoloniais links, ivory sets an ancient historical category, Since antiquity, in Africa and Asia, to its circulation in Europe. The notch in mammal teeth have remote source, associated with ancestral cultures that confeccionavam objects for numerous purposes. As explained by the curator Jorge Lúzio: “On routes interconnected realms and warehouses in Africa, or between commercialism circuits that made up the Mediterranean to the Indian, always ivory item as the most appreciated and valuable, By enabling unmatched plasticity and a visual effect whose accuracy in shapes and lines resulted in images and reproductions of expression never obtained another raw material“.

Despite the ivory art possess an unmatched visual sophistication, their antagonism lies in the environmental debate, by rethinking how the global order and economic systems have appropriated the traditions, on a commodification of natural resources and degradation of life – since it reached the twentieth century with a demand and consumption of ivory objects in the animal's survival limit. “Thus, the exhibition presents, between contributions, the opportunity to, to observe rare sculptures and works of indisputable importance of the colonial heritage, remember that among the functions of Art is the awakening of historical consciousness, so that the sense of preservation of all forms of life, the historical legacy and memory can contribute to the production of knowledge and the promotion of culture, sensitive to learn from the past, and especially, committed to the challenges of our time“, concludes Jorge Lúzio.

More on the subject, the technical director of the words of the MAS / SP and also curator, Maria Inês Lopes Coutinho: “The ivory word has its probable origin of the Arabic, casmal-FIF, It is fif: elephant and CASM: ur, meaning elephant bone. The social organization of elephants is a matriarchy. Young males walk in single flocks and old live lonely in places where there is water and food. They are very sensitive. The gestation 22 months; at birth, weigh 100 kilos; measuring one meter; heart weighs 25 kilos and suck ten gallons of milk per day. They come from Africa, Asia and the Philippines. The function is attached to seek power, salt and water, digging for minerals needed their support and defense against possible attacks, besides maintaining its identity within the herd. In its composition there lime phosphate, magnesium, calcium carbonate and calcium fluoride. The optimum storage temperature is 18 degrees C and 60% RH“.

Previous: Jennifer Lobo, founder and CEO of social networking platform My Sponsor, explains the importance of friendships in our lives
Next: Canal Futura debut "What Is This Body?”, series that alert to combat sexual violence against children and adolescents