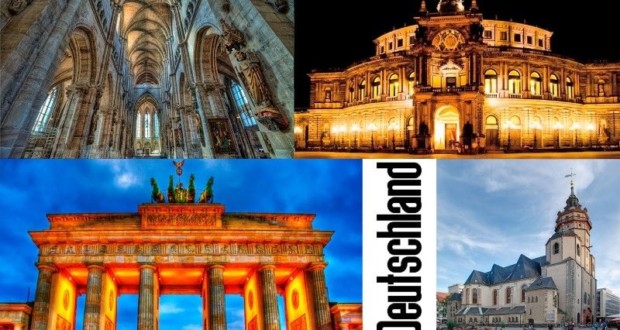 The trip will focus on two specific cultural areas: music and visual arts. Music is an art form that has special relationship with the cultural history of Germany. It is notable part in the construction of identity process, from the medieval vocal practice to concert music performed by major orchestras of modernity, permeating the Protestant Reformation, the baroque opera, the spread of Enlightenment ideals during the classical period and romantic, by the Nazi regime and the policy of the Berlin Wall fall. The music we know today worldwide, found in composers and German interpreters primordial stages of its development. Names like Heinrich Schütz, Johann Sebastian Bach, Ludwig van Beethoven, Franz Schubert, Felix Mendelssohn, Robert Schumann, Johannes Brahms, Richard Wagner, Richard Strauss and Karlheinz Stockhausen are just a few that make up the endless canon of important personalities of this cultural history. The selected destinations for travel in loco, We will experience this richness and diversity, seeking to understand how music fits so fundamentally in German identity and how it spreads to the rest of the world. With respect to visual arts, Emphasis will be given to this splendid architecture in the cities that make up the script, set in different periods of the history of the country. Thus, the Roadmap proposes an immersion in German history with the observation of several buildings, streets, churches, memorials, and landmarks such as the Brandenburg Gate, spanning a period that extends from the Middle Ages to the contemporary era.

Dresden bombing route: Known as the "Florence on the Elbe", It has a long history as capital and royal residence of the kings of Saxony. Possessed of centuries of extraordinary cultural and artistic splendor, the city was the target of a bombing during the Second World War, in 1945, where about 32 000 to 150 000 people died.

Street architectures and churches: Kreuzkirche, Frauenkirche, Hofkirche, important churches illustrating the German artistic wealth, and are important testimonies of social history and the nation's political. Visitation to the churches for study of architectural styles, history of the buildings and importance of cultural heritage as memory repository.

musical event: Dresden Opera House - Built in 1841 by architect Gottfried Semper, a Semperoper Dresden, It is one of the most important German concert halls. The building has gone through two reconstructions, the second one due to the Dresden bombing. Stage of great performers such as Karl Böhm, Kurt Sanderling, Herbert Blomstedt, Giuseppe Sinopoli, Bernard Haitink, the Semperoper has a history of premieres of Richard Wagner, Richard Strauss, Ferruccio Busoni, Paul Hindemith e Kurt Weill.

gemaldegalerie: One of the most important German museums. Its collection has about 700 old painting works, the Middle Ages, Renaissance and Baroque. The collection is part of the State Collection of Dresden Art. The building that houses the collection of the Gemäldegalerie is a beautiful example of German Baroque.

Coffe Baum - nice place to take a kuchen Kafee, as the German traditional afternoon coffee. This cafe was a meeting place for musicians and German artists from various eras.

Street Architecture and Rathaus (town hall). Here, the proposal is to conduct a cultural immersion through the urban experience, watching the buildings, houses and shops, noting its peculiarities, interventions, materials and the "memory layer" building all cities. A pleasant walk, It will also be visited the city (Rathaus), as its beautiful architecture.

Nicolaikirche - it is a church built in 1165 and exceeds its religious function, since it was debut stage for important works of Bach and also local headquarters of Montagsdemonstrationem ("Manifestations of the Mondays"), demonstrations in protest against the then political conditions of the German Democratic Republic (RDA), in 1989. The event is very important to stop the country's history, since the first demonstration took place in Lepizig, spreading later to all other cities of the GDR.

musical event: Thomanerchor (this attraction can occur in two different formats: concert format or musical inserts during a Protestant worship) - Founded in 1212, the Thomanerchor is one of the traditional choirs of the world's children, responsible for musical performance in the services of St. Thomas (Church of St. Thomas), where Bach was chapel master 1723 to 1750.

Nazi Documentation Center Nazi Party Congress opened in the complex 2001, the Documentation Center at the Nazi Party Congress of the complex is a museum dedicated to the history of the Third Reich, the period in which Adolf Hitler was in power (1933-1945). The museum is located in the north wing of an arena built by order of the German dictator, next to the old areas of the Nazi party parade.

musical event: organ concert in one of the major Gothic cathedrals of the city center, to define according to cultural programming 2019. Due to the precious pipe organs present in the churches of Nuremberg, it is hometown of important names of German organ-related tradition, such as Hans Leo Hassler and Johann Pachelbel.

Holocaust Memorial (Holocaust Memorial): The Memorial to the Murdered Jews of Europe, or as it is more commonly called Holocaust Memorial, as the name indicates, a memorial dedicated to the six million Jews killed during the Nazi regime. The Holocaust Memorial is located in the heart of Berlin, one block from the Brandenburg Gate, between the Tiergarten park and Potsdamer Platz. The construction of the memorial was completed in 2004, opening in 10 May 2005, as part of the celebrations of 60 years after the end of World War II.

Berlin Wall: Perhaps one of the most famous buildings in history, the Berlin Wall was the symbol of a divided Germany, a period where the Cold War divided minds, emotions, individuals and nations, an ideological forces game. The fall of that wall, in 1989, also made him a symbol of the end of the Cold War, what makes the Berlin Wall a place endowed with history, symbologies, symbol of a united Germany and repository of an important collective memory.

Brandenburg Gate: Former city gate, It was rebuilt in the late eighteenth century as a triumphal arch in the neoclassical style, and now one of the best known landmarks of Germany. The gate is the monumental entry to Unter den Linden, the famous avenue of lime trees which formerly led directly to the City Palace of the Prussian kings. must visit for all those who travel to Berlin, the monument is a symbol of unity and European peace.

musical event: Concert of the Berlin Philharmonic, considered the best symphony orchestra in the world by critics, in its traditional concert hall, a Philharmonie. Founded in the late nineteenth century, the Berlin Philharmonic is a universal instrument of German artistic greatness, one representative of the country that generated Bach, Beethoven, Brahms, Wagner, Richard Strauss, and an endless list of composers and performers of excellence.

Graduated in history from the State University of Campinas (1997), Master in history of art and culture from the University of Campinas (2000) and a doctorate in Social History from the University of Campinas (2005). Has PhD by the Department of modern Letters FFLCH-USP. He is currently a lecturer in the following institutions: Assumption University Center (UNIFAI), Universidade São Judas Tadeu and Museu de Arte Sacra de São Paulo. Has experience in the field of art history, working mainly in the areas of culture of the 20th century: Modern Art, Contemporary Art, Italian Futurism, Umberto Boccioni, art and politics, Comic Strip and mass culture, History of Design, Communication theory and media analysis, Cinema, Cultural Industry, African Art, Tomb Art, translation.

Master of Performance in Conducting from Escola de Comunicações e Artes (ECA-USP), He holds a degree in Art Education with specialization in Music from the University of Campinas (UNICAMP). He has experience in the Music area, with an emphasis on choral conducting and music education. It is currently conductor and founder of the Coral MAS-SP (Museu de Arte Sacra de São Paulo), conductor and founder of the Chorus A Cappella (Coral ancient Monastery - Monastery of St. Benedict – SP), Regent's English Culture Pop Choir in Guarulhos and Campinas and professor of Sacred Art Museum of Sao Paulo. Developed teaching work in choral conducting in the Project Sing São Paulo of São Paulo City Hall and also teaching and research in special education, Louis Braille Institute of Campinas, musicografia teaching braille.

Your reservation will only be legitimized by paying.

– transport Museu de Arte Sacra de São Paulo to airport Guarulhos. Return on their own.
– Flights in economy class; airline – Lufthansa.
– Four star hotels with breakfast;
– land transportation with luxury buses between towns;
– Travel insurance;
– Assistance of a companion of SENATOR;
– Entries in museums, galleries and musical events;
– 02 dinners without drinks - 01 in Nuremberg on the day of arrival and 01 dinner in Berlin last night;
– Monitoring of teachers.

NOT INCLUDED:
– personal expenses;
– Meals and drinks;
– hotel taxes and service tourism;
– All and any service not mentioned in the above item.

Previous: Ivone Oliveira - "Inspiration in the Music and Dance" by Edmundo Cavalcanti
Next: trance art: energy that turns abstract into concrete