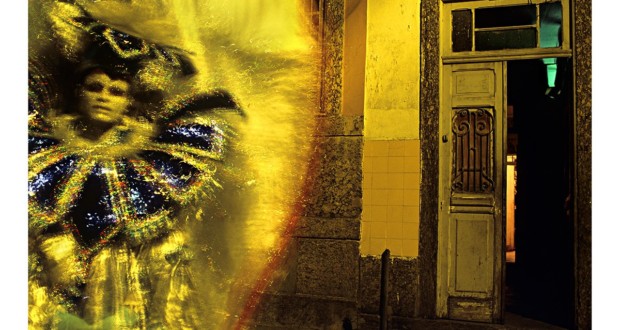 On Saturday, 23 November, the Santa Teresa district will focus on the visual arts with the opening of another edition of the East Circuit, which combines unreleased shows simultaneous openings in moving spaces Studio Nineteen, Canto da Carambola, QTR, Modernists gallery and yellow house in search of a new dynamic for the sector.

We live in a time of immense challenges and transformations, it is up to art and artist involvement growing with the world's problems. In this sense, collective forms of work and the use of urban spaces are configured as a power for greater dialogue between art and the public. With its unique architecture and struggling to rediscover, Santa Teresa neighborhood remains a strength and experimentation space, always to produce "small noises”. In this context the Middle Circuit is one of those noises, that streamlines by its shape, the simultaneous operation of exhibition spaces installed in some neighborhood Address, enabling conversations and exchanges of ideas in the visual arts, placing the viewer in an ongoing dialogue in the dialogue between the public and private space, attuned to social issues. Thus, with the spirit of mutual cooperation and networking, East Circuit proposes to organize exhibitions in context with the focus on contemporary art and its interfaces with everyday life in the city.

The East circuit is coordinated by Julio Castro, visual artist and professor at the School of Visual Arts of Parque Lage, with trajectory of exhibitions in Brazil and abroad, in partnership with Ana Prado, visual artist, Architect, doctorate in studies of art and the city.

The artist carved phrases on the gallery walls transforming the place monument itself, exalting the distant past, honoring the almost imperceptible today and become more full of happiness. The work includes little surprises that will be inserted between sentences, reinforcing the poetic artist who uses the word as a raw, the place and the objects as written. In a conversation with the graphic experience of Nineteen Studio unfolds the proposal for a job with one of the phrases in stencil to apply the neighborhood.

Since 2018 the stencil workshops at Nineteen Studio are the basis for the construction of panels designed for public space and some of these works begin to occupy walls and facades of the east and adjacent street in agreement with the locals. For this edition will be played in Middle Street a woodcut of Mary Lydia Magliani (1946/2012) artist who for several years worked in the Studio Nineteen.

The artist presents a series of small paintings and two medium-sized paintings that act as anchors around which bind smaller. dark and solar works are distributed in space, taking as its starting point the memory of Caravaggio and Rembrandt and the other side, Monet and the Impressionists, with its celebration of light that bathes the nature. In the push-push against human figure is: head, trunk and limbs.

The show brings together with 23 artists who think the body as territory of practices and multiple experiences. The exhibited works present reflections on the particularity of each being whose feminine attitude emerges. Concepts related to identity, political, contemplation and natural elements run counter screaming emergencies and rebuilding symbolisms.

All the AC Junior images brings numerous indications that go beyond a possible recognition of similarities with seemingly familiar realities. When approaching men and objects, the artist breaks away from any obedience to the real and representation technique that results in images in its essential meaning, constructed from its wanderings, Souvenirs, readings and their subjective way to capture the imagination of the country with its icons, parties and toils.

The Rio de Janeiro with its policies and visual chronicles and the Santa Teresa neighborhood in the context of the evolution of the visual arts in the city.

Art as a factor of identity in Santa Teresa

On 14 December the exhibition will again be open to the public while the 14 19h except the corner of Carambola that will open 16 at 19h.

Julio Castro, visual artist and professor of EAV- Parque Lage, and trajectory of exhibitions in Brazil and abroad, and it is one of the creators of several development projects in the art of Santa Teresa, as the Art of Open Doors, circuit Middle, Interference Urban Award, among others. Nineteen also leads Estudio, active art space in the neighborhood that usually presents major artists works and performs various international artistic exchanges

Ana Prado, formed in Architecture and Urban, PhD student in the graduate program History of Science, Technical and Epistemology (HCTE-UFRJ), with a thesis on the development of art, City and awareness. Master in Urban Space Management with the theme "The Meanings of Transformation - Art, culture and urban space in Santa Teresa ", which deals with the transformation of the neighborhood by the increasing use of urban spaces by the artists and their interfaces with art projects in the neighborhood. Works from the years 2000 as a collaborator in Nineteen Studio in the production of exhibitions and artist in group exhibitions.

Take your passport – Visiting guide in any of the open spaces in the East Circuit and participate in a draw and compete for prizes.

As part of the draw

Stamp your passport in the spaces visited, participate in the draw and could win an original engraving, a valley shopping at La Vereda shop worth up to R $ 150.00 and a dinner for two at Santa Spirit Restaurant.

Validating the passport to enter the lottery:

Period: 24 November to 14 of december, fourth second, from 11h to 17h and Sundays, from 10 am to 14h. Alternative schedules scheduling via email.