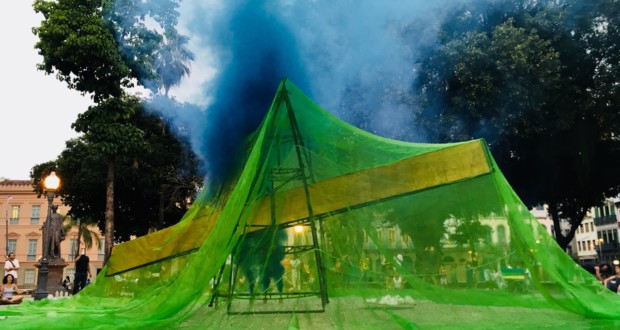 Performance acrobatic directed by Renato Linhares back to the SEA stilts on Sunday, 11 August

The Museu de Arte do Rio, under the management of the Institute Odeon, receives on its stilts on Sunday, 11 August, a presentation of the show hand - Translates House For Landscape. Directed by Renato Linhares, acrobatic performance with choreographic sequences will be held at 16h.

The intervention brings to the public the development, live, a frame 8 meters of height, made of iron and wood. Movements that refer to a building, as screw, Loading dock and, They mix to balance pendulum and to risky slips into a huge ramp of wood during construction. In the middle of colored smoke artists moving and, in the end, It is left in the center an indoor sculpture by a large canvas, is transforming not circus.

This is the second time that the show will be held at SEA. On 30 June the group charmed children and adults with two performances in the museum stilts.

The presentation of the Spectacle Hand has free admission and classification is free.

HAND - translation of the house by the landscape takes to the streets a reflection on the construction of (hand of-) public work. A dip in the metaphysical world of assemblies and urban structures of buildings is the central proposal of "HAND", that estrou on 16 April 2019 in M. Park.

Taking as a starting point to create an urban intervention, the performance takes place from the moment the seven artists invade the square in a car / freight / sound, taking viewers that are experiencing the many forms of expression that are in touch, the builder action, the simple displacement irons, nuts and bolts.