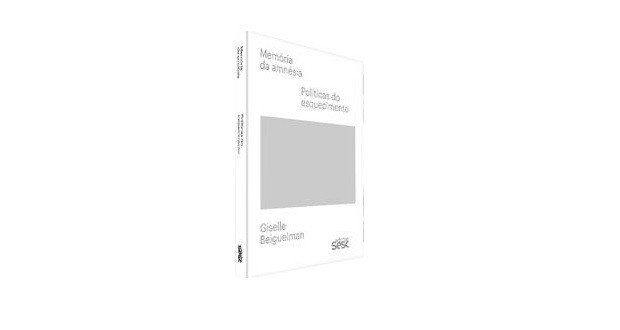 The Art Museum of the river-SEA, under the management of the Institute Odeon, gets the day 17 August, at 4:00 pm, the release of "amnesia Memory: forgetting policies ", published by Editions SESC São Paulo. A work of Giselle Beiguelman, artist and professor at USP, gathers textual and visual essays on the aesthetic and the policies of systematic preservation of memory and the actions that transform, also, into oblivion policies. At the same time turns the buildings and monuments of the past, the author exposes the contemporary relations of these works with fixed and flows from cities, a contrast between the ruin and the future.

The launch takes place in the museum's auditorium and will feature a conversation wheel mediated curator and SEA Content former manager, Clarissa Diniz. Entrance to the event will be free and in order of arrival. Space is subject to stocking.

Introduced by a critical essay, the chapters of the book deal with projects carried out by the author in different contexts, in urban areas and information spaces of the media and social networks. The first of these, entitled "Tropical convulsive beauty" - a statement made at the 3rd Biennial of Bahia (2014), the State Historical Archive - discusses the tension between nature and culture, informal and formal, the confrontation between control and lack that are entangled with cultural and urban history of Brazil.

The second chapter, "Memory amnesia", It gives its name to the book and is the result of an exhibition held by the author in 2015. Focusing on monuments deposits in São Paulo, the project included the transfer of a set of works and Caninde depositing monuments fragments into the municipal File History, where they were exposed, lying, for four months.

A memodigital ria–The next two chapters deal with work carried out by Beiguelman with digital media. "Already yesterday?"I have a long visual essay from photographs and frames which documented, from 2010 to 2017, the transformation of the port area of ​​Rio de Janeiro (Porto Maravilha), with emphasis on the demolition of the Perimeter and around the Praca Maua. The following excerpt from the book,Museum of losses for oblivion clouds, discusses the difficulties of dealing with the memory of the networks from the net art work The book after book and its incorporation into the MAC-USP's collection.

Incisndio by Seu Nacional – MemoRia amnisboth was almost ready when, in 2 September 2018, a fire turned into ruins the National Museum, in Rio de Janeiro. Faced with this tragedy, Beiguelman included a final chapter, entitled "Tropical Beauty compulsive", where the fire is read under the sign of disasters and as a metaphor of our recent past.

In General, all these approaches relate to disputes over visibility in the field of memory and follow the purposes and efforts of those who build certain narratives and analyze its consequences in the spaces of cities.

Search preservation of digital, art and activism in the city networking and aesthetics of memory in century 21. Develops artistic intervention projects in public space and digital media. It is a lecturer and professor at FAU was coordinator of its course design, from 2013 to 2015. Among his recent projects stand out memory of Amnesia (2015), Odiolândia (2017) and curated by Arquinterface: the city expanded the networks (2015). It's Laboratory for member OTHER urbanisms (FAUUSP) e do Interdisciplinary Laboratory Image Knowledge - Humboldt University of Berlin. Author of several books and articles on art and digital culture, His works are part of museum collections in Brazil and abroad, as ZKM (Germany), Yd Vashem (Israel), Latin American Colection – Essex University (England), MAC-USP and Pinacoteca do Estado de São Paulo. He was editor in chief of the magazine Select (2011-2014) and a columnist for Radio and USP Magazine Zum.

Clarissa Diniz is a curator and art critic. It is master in art history at PPGArtes / UERJ and a doctoral student in anthropology at PPGSA / UFRJ. He was the editor of Tatuí magazine and published numerous texts, catalogs and books, Button example the – aspects of artistic legitimation (Ed. Massangana, 2008). He healed many exhibitions and, between 2013 and 2018, He served on the Rio Art Museum – MAR, where he organized exhibitions such as Pernambuco Experimental (2013) and Dja Guata Pora: Rio de indigenous January (2017). She teaches at the School of Visual Arts of Parque Lage.

Issues on the SESC São Paulo:

Guided by the concepts of lifelong learning and access to culture, the SESC São Paulo Editions publish books in various fields of knowledge and in dialogue with the programming of SESC. The label has a varied catalog, aimed at preservation and dissemination of content on the many aspects of contemporary. His titles are available in stores SESC, the virtual bookstore Portal SESC São Paulo, in major bookstores and applications such as Google Play and Apple Store.