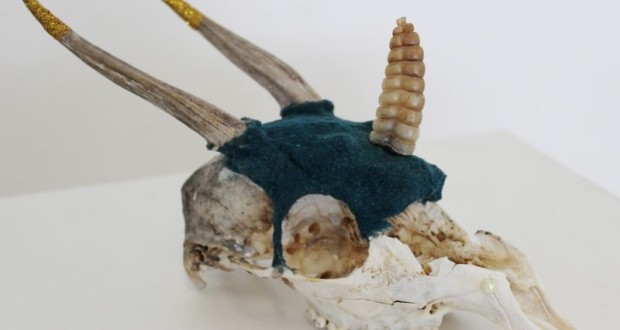 From the 6:00 pm of the next day 4 February and up 4 March-PIN GALLERY receives two exhibitions that bring together the work of three artists. In The Living Room A, on the ground floor of the Gallery, will be the POP BEAST BEAST exhibition FAUNA, with the newest artistic experiences of brasiliense Raquel Nava. In his works, Live bones, skulls and stuffed animals juxtaposed to everyday objects, as China and fluorescent lamps. A proposal for a reflection on the relationship of human beings with animals and nature.

The Two Room brings together the American looks Ilene Sunshine and Uruguayan Diana Blok-Dutch in UNDERGROUND DIALOGUES. The shows focus on relationship between photography and video installation and drawings in two and three dimensions. In focus, the presence of the human in the world and nature and communion of opposites.

‘Beast Beast Pop Fauna It's like walking by Estranhossauro Rex theme park Semi Synthetic taking its Guaraná Jesus. Best: It's like giving a walk in Chinese copy of Ver-o-Peso Fair at the sound of a Korean technobrega. Feathers, metal, hog casings, squash courts… The bold design of the appendix that sprouts and shoots up unexpectedly from somewhere in the body… The morning table full of Scrooge pudinzinhos, Little Monkey, Snake rattles. Tiny skulls of pile construction. Toys of Paraguay. Unknown birds stopped there, carrying his burden, under the Cabinet, doing a shim to the table, the weight of life accumulated in the back. Playing our backwards, organizing our bones, grooming them '. 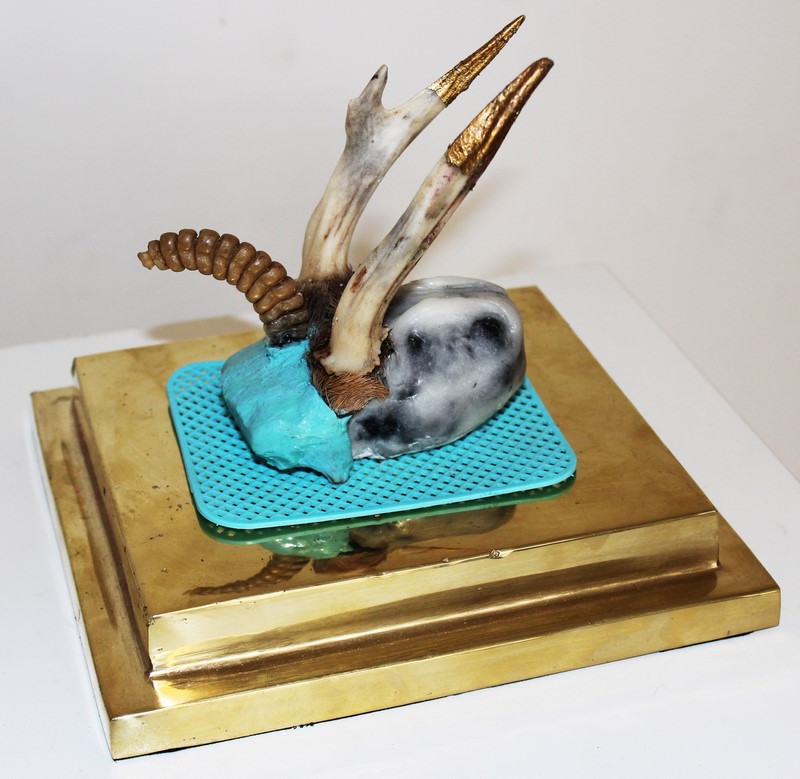 The exhibition consists of a series of assemblies made with bones, skulls and stuffed animals juxtaposed to everyday objects. Taxidermy is a preservation technique the skin of an animal to ride it or reproduce it in the form of sculpture for display or study. In this exhibition, taxidermy is used so that the animal is not presented in its anatomical shape, but shown as another object within the composition.

The cold porcelain (popularly known as biscuit) integrates some of the work as a cartilage mass that seems to follow the shape of the skulls and suggest or mythological hybrid animals. The appropriate objects now relate the biological nature of the material, as ostrich feather duster, Now if they argued for their industrial origin, as fluorescent fixtures or optical fibers that Flash with the lamp stack.

The cycle of organic matter and inorganic chemistry changes with relation to our desires and cultural habits. Beast Beast Pop Fauna Search the transmutations of meanings of our relationship with animals in nature and in the urban environment.

RAQUEL NAVA – Brasília, 1981. Degree in Visual Arts from the University of Brasilia, where he also completed a master's degree in Contemporary Poetry, attended the Faculty of philosophy and letters of the University of Buenos Aires. He exhibited regularly since 2004. His works included in the collections of the National Museum of the Republic, the Federal University of Goiás, Sérgio Carvalho and Boghossian Foundation collection, of Brussels.

Underground dialogues is a visual conversation between Diana Blok (Uruguay/Netherlands) and Ilene Sunshine (New York). Blok uses photography and video installation as a means, While Sunshine works with two-and three-dimensional drawings. Although the choices for different materials, both have a common interest by manifestations of human presence in the world and in nature. The work also explores the communion of supposed opposites: male/female, digital/analog, geometric/organic, negative/positive space. 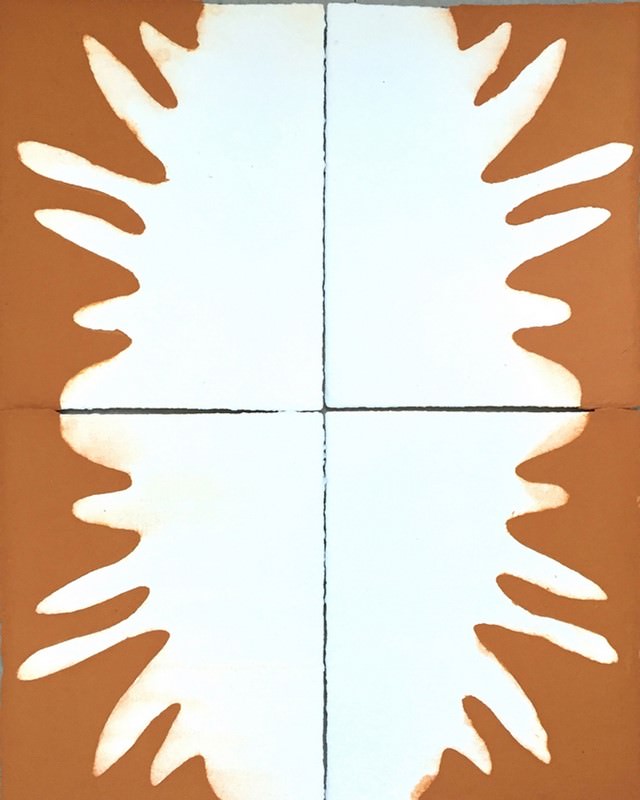 Even if the artists are not natural, Brasilia, both are attracted by the unique qualities of the city and inspired by the fusion of geometric construction with the natural tropical environment, where stands the cerrado with trees twisted. Photographs of Blok juxtaposed the human form with the parts of a tree in provocative ways: his images of seeds bear a mythical connotation. Sunshine uses tree branches found along the way and the Red Earth of Brasilia as his drawing material, with which changes the gallery space.

They move from their natural and your intuition for the discovery of associations and correlations between different materials and knowledge. This exhibition is the result of the meeting and the synergy between the two artists.

In Underground dialogues, culture and nature come together in a common area offering a visceral experience where the perception is manifested both in body and in mind, through unusual movements, underground. 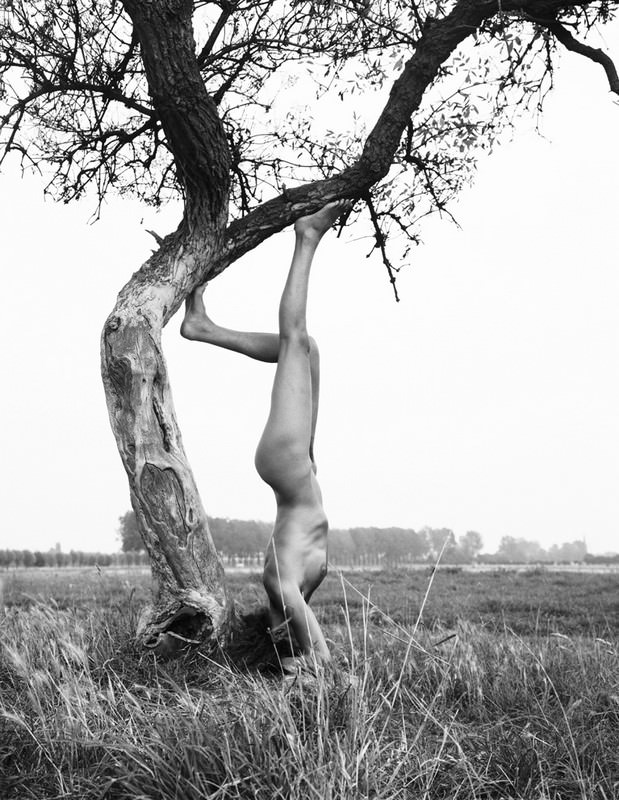 DIANA BLOK- Visual artist and photographer born in Montevideo, in Uruguay, daughter to father a diplomat. He lived in various countries even if rooted in Amsterdam, in the Netherlands, in 1974, where he currently lives and works. In the last 30 years, has taught master's courses in the Netherlands and in countries such as Finland, Sweden and Turkey. Achieved international recognition in the artistic scene, through his books and exhibitions, in which addresses issues related to gender identity, sexual diversity, taboos around the body, among other. Their projects were approved on several occasions by the Visual Arts and architecture of Amsterdam and the Dutch Mondriaan Foundation.

ILENE SUNSHINE- Lives and works in New York since 1990. He attended the School of fine arts at Boston University, where she graduated, with honor, in 1979, with a BFA in sculpture. In his artworks, uses a wide variety of materials, of tree leaves and plastic bags to antique toys, exploring the interface nature/culture. His work has been widely reported in the United States and Europe.