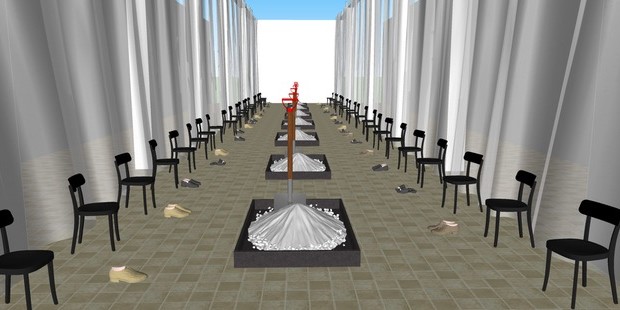 A Cultural Workshop Oswald de Andrade, equipment Ministry of Culture of São Paulo, receives exposure “[IN]VISIBLE - Polish, memory and resistance ", of artists Eva Castiel, Fanny Feigenson and Fulvia Molina and curated by Márcio Seligmann-Silva. The realization of new installation, round table to experts, performances, beyond guided tours through the neighborhood Bom Retiro, recovered history of Jewish women, brought to South America in a sexual exploitation scheme and trafficking in persons.

In the exhibition space of the workshop, physical elements refer to burial ideas, absence and oblivion this trajectory. Visitors also have access to audio and unpublished texts that recover the memories of these women and point out how their efforts can relate to the present, when several deletions are being engendered by the federal government, and serve as example for future generations.

The history of "Polish" is a trademark of women's resistance, written by traces that survive the erasure of their memories. tells the target young Jewish women who left their homes in villages of Europe Oriensuch and came to South America from the late nineteenth to mid-twentieth century, deluded by promises of marriage and work, driven to leave behind a history of poverty and ethnic persecution. Disembarking in cities like Rio de Janeiro, Santos and Buenos Aires, found themselves sexual attached to a scanning cycle, controlled by pimps and traffickers linked to criminal organization Zvi Migdal.

Because the prostitution be condemned by Judaism, these women eventually excluded by own religious community, were prevented to attend the synagogues and They are buried in the traditional Jewish cemeteries. Depriving them of a decent funeral, of utmost importance to its tradition.

The term "Polish" I had a tone derogatory, becoming synonymous with Jewish prostitute, when referring to their origins. They were stigmatized even by hygienists policies of the governor Adhemar de Barros, which created a red-light district in Itaboca Street, today Césare Street Lombroso, Bom Retiro, neighborhood, since that time, It was inhabited predominantly by immigrants.

The "Polish", however, resisted, keeping your cultural identity, religious and ethnic, their own mutual aid associations: such as schools, synagogues, cultural associations and, even, their own cemeteries as the Inhaúma, in Rio de Janeiro, Chora Menino, in São Paulo, and the Cubatao. They culture of a resistance mode.

On 26 October, the opening of the exhibition has two other events: at 3:0 pm, the artist Vic Sales performs a poetic performance about contemporary woman and, at 3:30 pm, the Coral Tradition ICIB – Israeli Cultural Institute Brasileiro makes presentation of songs from the Yiddish songbook.

Eva Castiel lives and works in São Paulo. Multimedia artist moves from the installation, video art and public art. He began his career in the 1980 and is part of the group from Casa Armored 2000. He held several solo exhibitions in Brazil and in countries like Germany, Israel, Hungary, Nova York e China, among them: "Infinity", Valu Oria Galeria, in São Paulo, 2007, "The West, O Muro ", Ruin The Franciscan Monastery Kircher, Berlin, 2002 e "Kalk", Galeria Barsikow, in Berlin, 2000. He participated in several group exhibitions, among them, "Corpoinstalação", at SESC Pompéia, São Paulo, in 2009, "Parallel Biennial", in 2006, “Genius Loci”, the Institute Maria Antonia, in São Paulo, 2002, "Vitus", no artecidadezonaleste, São Paulo, 2002 e "Westward The Wall", em Luther Church, in Cologne, 2000.

Fanny Feigenson, lives and works in São Paulo. It is post-doctoral student in Clinical Psychology at PUC SP with Peter Pal Pelbart, PhD in Visual Poetry from the University of São Paulo. She works as a teacher in the course of Architecture and Urbanism at Mackenzie University since 1975. Focuses its production in various media, videos and installations. In the area of ​​Visual Arts, studied drawing with Yolanda Mohalyi and painting with Samson Flexor; and facilities, videos and interventions with Carlos Fajardo. Held exhibitions in Sao Paulo, Colônia, Berlin, Chicago and Slovenia, which it was awarded in the Biennial, with the creation of a video. In 2016, held a video installation and sound intervention "by a whisker", the Jewish Museum and Cultural Center Unibes, in São Paulo, which discussed the contemporary moment in the cities and their diversity. In 2018 held exhibition "XXI Harpy" in the history of Mackenzie Presbyterian University Center.

Fulvia Molina has his attention focused on political and social memory of the country, particularly in aspects of human rights violations, the status of women, social exclusion and migration. Master in Arts from the School of Communication and Arts of USP, did residency in Facultad de Bellas Artes of the Universidad Politécnica de Valencia, Spain, No. Broadcast Center Press Paper Quebec, Canada and the Frauen Kunstforum in Hagen, Germany. His works in painting, engraving, objects, photography, audios and videos seek to express the different layers of reality fragmenting and reflecting, It is perceived each time as update of consciousness. It has participated in international exhibitions Berlin, Essen, Hagen, Québec and Madrid, among other cities. He is co-author and editor of books "MemoriAntonia - The Soul two buildings" and "Hiatus - Art, Memory and Human Rights in Latin America ".

Previous: Counterpoint space celebrates timeless childhood in photography
Next: Book and the play tells the coming of William Faulkner to Brazil