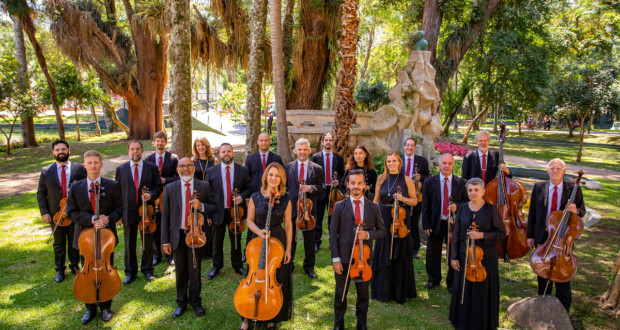 Chamber Orchestra of the city of Curitiba. Photo: Daniel Castilian.

With smaller formations, the Curitiba City Chamber Orchestra returns to the stage of Capela Santa Maria after seven months of isolation due to the pandemic of the new coronavirus in Curitiba. Chamber music for up to four members will be performed and of short duration.

celebrating 250 years since the birth of Ludwig van Beethoven, solo work by the composer's quartet are featured in the schedule that starts this Saturday (31/10), às 18h30. Tickets are already being sold through the Alô Ingressos website.

The return occurs within strict health protocols, and can be changed according to the guidelines of public health authorities. The flow of people within the space will be reduced, from 270 chairs made available to the public, will only be released 55 places.

The entrance to the concert hall will be released one hour before the beginning of the performance. The places to be occupied will be indicated in order of arrival, respecting the rules of social distance.

The Capela Santa Maria team was trained to meet all safety protocols, which also includes gel alcohol dispensers 70%, use of mask within the space, bathrooms limited to two people at a time and the elevator to one person, except if you are from the same family or social life, when two users will be allowed.

The presentations will be accompanied by an employee, which will oversee compliance with security protocols. Each person must remain seated in their seat, that cannot be exchanged.

The output will be organized by rows, starting with the one closest to the exit, to avoid crowding.

In addition to works by the composer Beethoven, the concert scheduled for the day 21 November honors Alberto Nepomuceno's centenary of death (1864-1920). Considered the father of nationalism in Brazilian classical music, the work Prayer, for violin and piano, Opens the concert.

Previous: Postponed to the day 12 the semifinal stage of the 13th edition of the Festival da Canção Aliança Francesa will be broadcast live via facebook and youtube from AF Rio from November
Next: Exhibition: By Soslaio - Carlos Fajardo, Marcelo Guarnieri Gallery - opening 11 November