Osmar Dallabona is an artist.

Is in hyper realism a way of presenting your sharp technique and transport for his works contemporary moments.

1966 – Enrolled in the School of Artes – São Paulo, where he studies free drawing;

1968 – Starts his first studies in oil on canvas. Receives its first guidance in the atelier of the painter Tania Verner;

1973 – Travels to São Paulo, where fixed residence in the capital;
– Start your first contacts with artists and art schools;
– Performs his first works "Expressionist" style;

1975 – Looking for ways to show and sell their work, participates in the annual examination for admission of new artists to the area of the square of the Republic, coordinated by the Secretariat of culture of São Paulo, being approved in practice test conducted with more than 100 artists, for 20 slots;

1976 – Filia-the Association of the plastic artists from the Republic square;
– Participates in his first group exhibition, sponsored and held at the State House-SP;

1977 – Participates in the V lounge of the Association of Artists of the Republic square, being awarded with honorable mention;

1978 – Carries out studies in surrealist school, running a series of work;
– Participates in the 42nd Paulista de Bellas Artes Hall, sponsored and carried out by the Secretariat of culture of São Paulo State, featuring two screens with surrealist themes;

1983 – Participates in the II Salon of plastic arts of the Lions Club of São Paulo, where is awarded the Bronze Medal;

1984 – Period that starts a series of works about life and the drought in northeastern Brazil;
– Beginning in this period the use of colors land, pastel, ochre, etc that later would merge with your new theme chosen for the development of your work;
– Participates in the Paulista de Bellas Artes Hall 47, where he receives the award of honorable mention, with the artwork “The Drought”;
– Receives its first review in the newspaper O Estado De Sao Paulo for his participation in the 47 Hall of fine arts of São Paulo with the job drought;
– Participates in group exhibition in Gallery Patron-SP;
– Participates in the exhibition Nine trends in press conference with eight other artists , sponsored and held at the Secretary of sports and Tourism of the State of São Paulo;
– Participates in the II Expoarte, D star West-SP, where are the small silver medal;
– Make a donation to the Municipal collection of the Pinacoteca of Guararapes-SP;

1986 – Orientalist painters, especially the master Mecatti, exert strong influence on their work;
– Participates in the XVI Ararense Salon of plastic arts-SP;
– Participates in the II Hall Nine Trends, sponsored and held at the Secretary of sports and Tourism of the State of São Paulo;
– Participates in the Contemporary Arts Show Brazil I – USA, at the Curtis Hixon Convention Center-Tampa Bay-Florida-USA, where is awarded the silver medal;
– Solo exhibition at Clube Paineiras do Morumbi-SP;
– Catalogued in the book arts and auctions and your markets-Julio Louzada-pag. 326;

1987 – Solo exhibition at Clube Atlético São Paulo-SP;
– Participates as special guest, of the sample of contemporary arts Brazil-Morocco, sponsored by the embassies of Brazil and Morocco. Stepping through various cities of the two countries as: São Paulo – Brasil, Casablanca, Produces and Rabat-Morocco;

1992 – Participates in group exhibition, held and sponsored by the Ministry of sports and Tourism of the State of São Paulo – SP;
– Participate as a special guest of the Contemporary Arts II Brazil-USA, Tampa Bay-Florida-USA;

2006 – Vote of joy and congratulations of the Municipal Council of São Paulo for the honorees by the Brazilian Academy of art, Culture and history and Biographical Institute of Brazil in the book: “São Paulo – Your story, its monuments – Highlights and personalities – Special Edition”.

In memory of Holocaust, the Italian Institute of Culture of Rio performs single session of the documentary "Hell Mittelbau Dora", that diretora italiana Mary Mirko Soap, Monday, 27, at the Cultural Center of the Judiciary (CCMJ)

Show the Chinese New Year will be the Wire Opera House 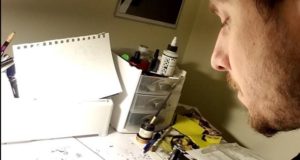 "If the wind is not favorable, take the oars." Latin proverb