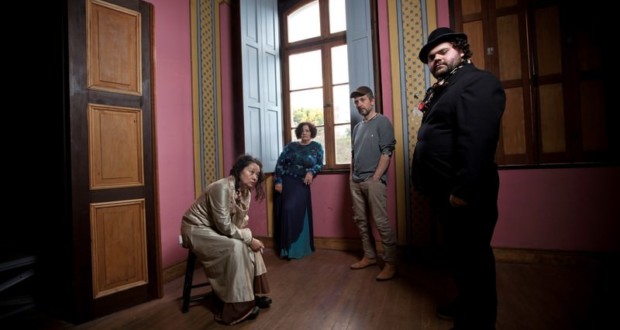 The theatrical show "Paranoid" premiere this Thursday (6), at the Teatro Curitibanas Novels, bringing to the stage the staging of unpublished works for the theatre of the authors Dalton Trevisan, Wilson Bueno and Domingos Pellegrini. Designed by Nena Inoue, the scenic area, the Assembly brings together actors and directors from different theatrical companies. The name of the show is "Paranoid", the tupi guarani, that means similar to sea (stop + not), to strengthen in the show the essence and meaning of Paraná in every way.

The tales, "Two Old People", "Ipês", the "large circus Ponies" and other selected, the writer Dalton Trevisan, "Sea Paraguayo", Wilson Bueno and "the Beach of 300", Domingos Pellegrini, are independent scenes brought to the stage by artists who take turns between directing and acting. Sign the direction Nadja Naira, Rafael Camargo and Nena Inoue and cast the actors Silvia Monteiro, Ricardo Nolasco, Nena Inoue and Rafael Camargo.

Of Dalton Trevisan, were chosen stories and short texts that reveal the power of brevity of the author in Paraná, one of the most decorated inside and outside Brazil. With "Sea Paraguayo", the writer Wilson Bueno, the originality of taking to the stage the provocation of literature that transposes his own borders. The stream of thought of the protagonist, the blend of portuñol and guarani search blur all borders. The "Beach of 300" is part of "the red man", that gave the author Sunday Pellegrini his first Jabuti award. The text brings the atmosphere and the historical memory of affective storyteller, Narrator of the story told as a diary, during a traffic jam on a highway in Northern Parana that lasts seven days.