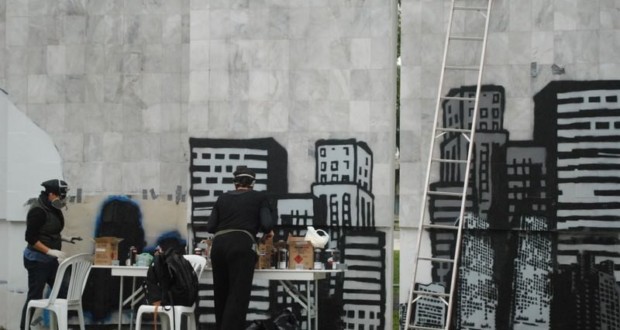 The Estádio Joaquim Américo Guimarães receives the UFC 198 This Saturday (14). As a counterpart, the organizers signed a partnership with the municipality of Curitiba Cultural Foundation to bring the city the artist Simone Sapienza, the Siss. She came to Curitiba to paint the shell of the Plaza Alfonso Botelho, that is opposite the stadium, and giving a free workshop about the stencil technique on Sunday (15), the 3:00 pm to 4:30 pm, for 25 young.

The workshop will be presented and introduced the technique of stencil to the participants and at the end they will do paintings by applying the technique. During the workshop, participants will tagging works sidings which happen in the square. The action also has the support of the Serra Verde Express.

Already the acoustic shell Panel, done with the stencil, began to be painted on Thursday (12) and will be finalized this Saturday. Is a tribute to the city and the activities that are performed in the square. The project is inspired by one of the main sights of the city, the Botanical Garden, buildings and sports references, with drawings of le parkour, bike, skaters and the fight, through the athlete Curitiba Cris Cyborg. All this combined with a soundbite- “Fight my battles”, of its author – talks about the everyday struggles, the square and the sport.

For the artist, the counterpart to be geared towards the art “It's amazing, because the painting leaves the square more cheerful and invites people to attend the location. Culture is very important. Animates the people, colors city. Out of the doldrums and makes you dream ". To ela, urban art is being very well accepted and connects various cultural events and sports. "I love to portray a woman athlete. A part of my job is portraying strong women, coming into environments that previously only men entered ", account. 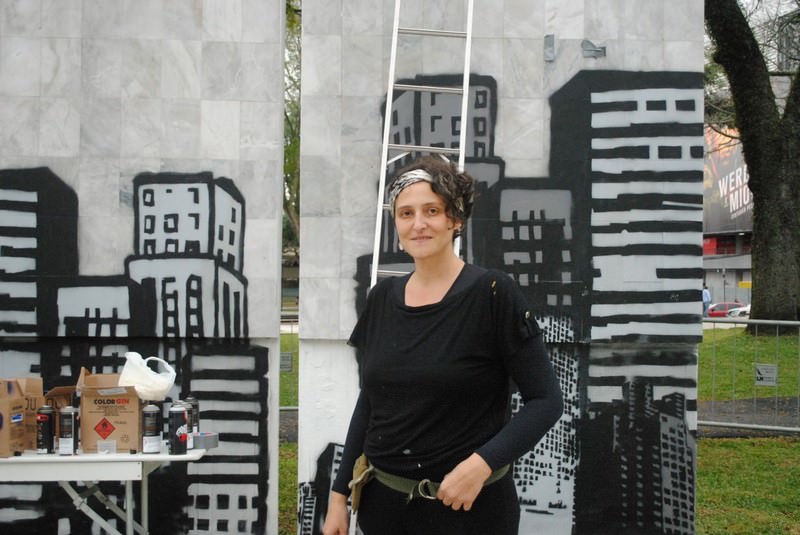 The artist- Sapienza is an artist from 1995. Its history in Street Art began in 2010, When she met the stencil. From this date she turned Siss, the urban artist, recognized for his work filled with acid touches of humor.

His creations are full of icons and super heroes, in human situations and who question the observer and his dogmas, taking it out of its comfort zone and making it is recognised in the work, at the same time encourages the search itself to interpretation what you see.

SIS uses the stencil and screen printing in almost all his works, about different types of support. Uses many texts, by own, combining them with the pictures. In 2012 produced the cover of the single "SuperStar" Madonna.

Stencil- Technique used to apply a drawing or illustration with ink or aerosol application by cutting or drilling in paper or acetate, resulting in a Board with the padding of the design leaked where will ink. The stencil (or stencil) obtained is used to print images on numerous surfaces.