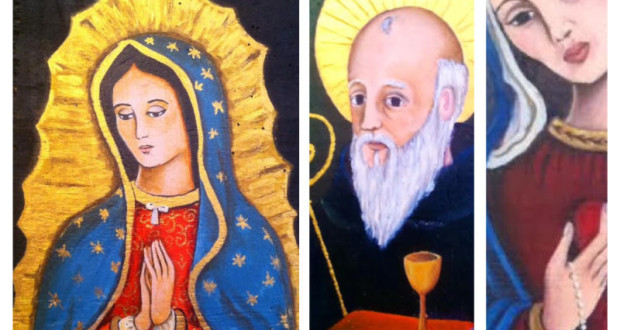 Exhibition "Pray for us" by Paulo Meirelles. Photo: Disclosure.

An artist has recreated Catholic Saints that give name to places
known from Curitiba in glass, screen, fabric and wood

Known for its multicolored works, who flirt with pop art, the fine artist Paulo Meirelles makes in this second half of 2016 a return to their spiritual origins. Will open the day 17 September, in the Museum of sacred art (historic centre) his show pray for us, all-around 30 works in which he recreates Saints popular protectors in painting on glass, screen, fabric and wood. The works can be visited until the day 20 November.

Paul elected Saints who were chosen to name the places where people will, are or live and that are closely linked to the idea of protection, Home. The artist prints strong tones to his saints-characters, presenting his interlocutor with a screenplay by Catholic iconography illustrated from Curitiba.

Our Lady of Guadalupe, St. Benedict, São Lourenço, Santa Barbara, Carmo, Mercês, Santa Terezinha, San Francisco, among others, have been worked in small formats with recovered materials and painted in oil. Although the technique used is not the traditional, the research of the artist preserves the unique features of each santo.

Upon returning to the sacred art, Manning makes a personal prayer, reconnecting to their curious religious origin. Was baptized already big, around 10 years, by influence of his godmother, It was a legionnaire. An illustrated Bible presented by the mother opened two possibilities in your life: being a priest or artist. Arrived to attend youth groups, but art spoke louder. The search for spirituality in other religions, however, scored his career. Recently, on the note of incredulity and despair today, He made his way back to Catholicism through art. "This work is a search for my roots, a repudiation of empty, My celebration of hope. I went back to my faith, not for despair, suffering or disappointment, I came back because all the ideas that I have read and seen, bearing the denial of the existence of the spirit in the purest light of reason, invariably ended up proving exactly the opposite ", account.

The religious and folk art gifts in pray for We have points of contact with the show Viva la Vida, original interpretation of Paulo Meirelles of Mexican artist Frida Kahlo and her work, launched last year, in the courtyard Batel during LabModa. In addition, the appreciation of the artist to reproduce the human figure in its most varied States of mind – the profane the Holy.

Artist, fashion designer, Professor of design, Paulo Meirelles was born in Marília, Interior of São Paulo. He moved to Curitiba in years 1980. His initial training was based on the improvement of the design of the human figure. Studied museology in STITCH/PR. Worked as a stylist for more than ten years, period in which also taught design courses at SENAC de Curitiba and Apucarana. In the 1990 was columnist and fashion illustrator weekly supplement live well from the newspaper Gazeta do Povo, working in parallel on your requested fashion Studio of. As an artist he signed dozens of solo exhibitions, press conferences, Besides the participation in art exhibitions. He was awarded at the Salon of Antonina by the State Secretary of culture. Some of his works are in collections of museums of Paraná and Santa Catarina. Currently, is dedicated to painting and drawing classes in his Studio, in neighborhood Grants, in Curitiba.