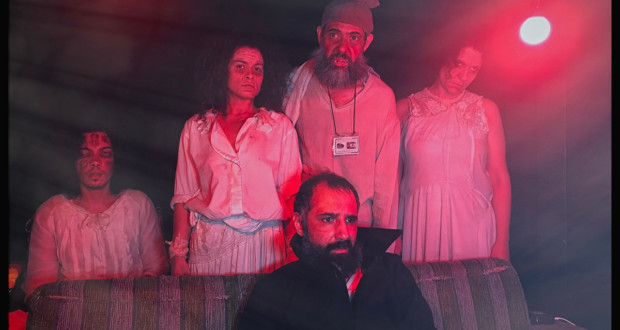 Show with the Stanislavsky Studio is on display at the Agora Theater to 15 of december, with sessions on Saturdays and Sundays, às 17h

In dialogue with the struggle of the Anti-Asylum Movement, the show "The Tenants", from Fabio Takeo with the Stanislavski studio, conta a história de almas abandonadas e solitárias que travam uma batalha intensa para viver e existir, despite its apparent invisibility. Through studies of Anton Chekhov literature and research about life in judicial asylums and Brazilian psychiatric hospitals, the group created the characters found in the narrative. The performances take place at the Agora Theater to 15 of december, with sessions on Saturdays and Sundays, às 17h.

In a mental hospital about to be closed, a man struggles to keep alive their memories. To record their memories, it reminds people that were part of his life, of dreams left behind and prospects for the future. Along part, the audience sees materialize on stage a series of complex people, deep and contradictory fighting not be forgotten.

"The main inspiration for the piece is the story 'Ward N. 6’, de Anton Tchekhov. However, other stories the author helped to create the essence of the characters, como ‘Sonhos’, 'Vanka', ‘Volodia’, 'One known man' and 'The Lady with the Dog'. In addition, They served as study material for the group's book 'Holocaust Brazilian' (Daniela Arbex) and documentaries 'Juqueri' (Goulart de Andrade), "The ship Stultifera ', 'In Reason Name' (both Helvetius Ratton), 'Images of the Unconscious - Nise da Silveira' (Leon Hirszman) and 'Estamira' (Marcos Prado)”, account Takeo.

To develop drama, Takeo used as a base material created by the actors Bernardes Pavanelli, Carlos Sobrinho, Silvia Sivieri and Tati de Souza from the company's studies. The staging and minimalist setting open passage to the merger between the characters and the creative nature of artists happen fully and organically, functioning as a bridge between the work and the audience. "Making this piece was the way we found to honor the stocks of all these lives, who have been marginalized by their mental condition ", says director.

created space 2015 for continuous research actor's craft, It focuses on the practice that was carried out by K. Stanislavsky in the studios of work he created and developed in the last ten years of work. The research is based on the concepts: "The Labor Actor About Yourself" , "Nature Organic Creative" and "Method of Physical Actions". The idea is that each performer deeply know their own Creator Nature Organic through practical work and continuous, investigating the depths of his soul the mysteries of artistic creation.

The studio purposes are the pursuit of "making the domain", the autonomy of the actor in the creation process, Experience the depth of the process and the accuracy of the transmission of content experienced by the actor's craft mastery, or as said Stanislavski: "Work for us to be masters, not just a role, but papers ".

The Stanislavski Studio is the result of over a decade of research performed by actor and theater educator Fabio Takeo over the last period of life and Russian masterpiece and also has in its stable core actors Bernardes Pavaneli, Silvia Sivieri, Carlos Sobrinho and Tati de Souza.

In a mental hospital about to be closed, a man struggles to keep alive their memories. To make a record of his memories, he remembers the people who were part of his life, of dreams left behind and prospects for the future.