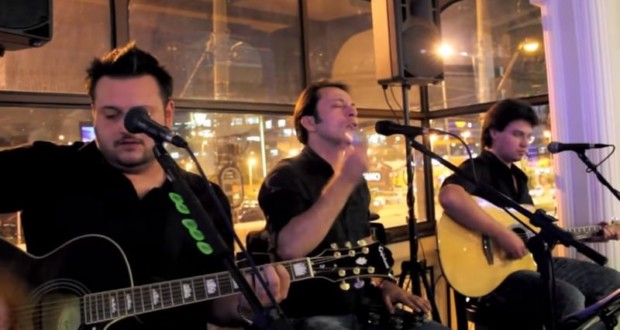 The Other Side of Floyd. Photo: Disclosure.

Pink Floyd on acoustic version will be presented at Sesc Sorocaba

The project "Sound in the area", bringing together on Friday nights several genres in a light and relaxed environment, conducive to enjoy a song with the family, presents a show in tribute to Pink Floyd, with the band The Other Side of Floyd. The concert will be held on 18 of december, at 8:0 pm, in the living area, and has free entry.

The Other Side of Floyd is a project in honor of one of the most important international rock bands. Composed only for two guitars, three voices and percussion, nude group Pink Floyd's repertoire, bringing to light only the element song of original compositions.

The Group, that is since 2011, is formed by Lucas Iessi (guitar and voice), Luiz Felipe Fonseca (guitar and voice) and Fabio Luis Pereira (voice and percussion) and made several presentations at shows of Sorocaba and region.

The Repertoire has the main works of the British band and includes the presentation of two albums in their entirety: The Dark Side of the Moon (1973) and Wish You Were Here (1975), In addition to several songs from the album The Wall (1979), Animals (1977), among others.

With a show of approximately 2 hours, the band combines the simplicity of training with the complexity of the songs in a balanced way. Follow the The Other Side of Floyd by Facebook: www.facebook.com/TheOtherSideofFloyd.

Tagged with: art music Pink Floyd Rock Sesc Sorocaba The Other Side of Floyd