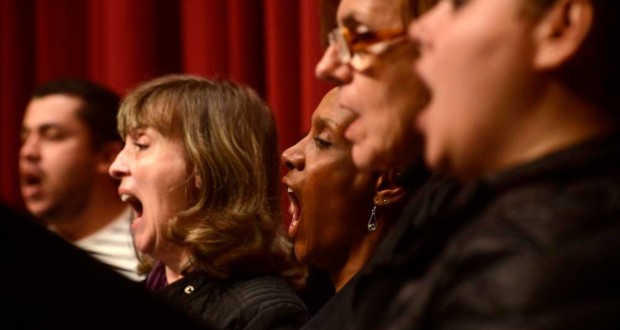 French music and poetry of the 20th century the Chapel Santa Maria in concert ' Temps la voix ', prepared by the choir of the Camerata Antiqua of Curitiba on Friday (19), at 8:00 pm and on Saturday (20), às 18h30. The presentation has the baton of conductor Dorit Kolling, the Mato Grosso, scenographic direction of actor/director Marino Galvão Jr. and declamations of Priscilla Pruetter poetry.

O programa traz poemas que remetem a paisagens da França profana do século XX. "I wanted to promote a musical journey! Are emblematic of pages a real musical heritage, and that show a vast panorama, between the Trois chansons of Debussy and Ravel and the Six chansons de Paul Hindemith ", explains Mara.

Marino Galvão, responsible for the stage direction is also Chief Executive Officer of the ICAC, body which administers the Camerata. With more than 30 years of experience in theater, Marino explains on the work done for this presentation: "In general the choristers are very vigilant on the issue because they have experiences in scenic Opera, so I see a very large potential for work with a more theatrical direction and be able to exploit this ability that they already have with this sort of concert "concludes.

Dorit Kolling specializes in Brazilian Music and a master's degree in history from the UFMT. Since October 1988 is Professor of the Department of Arts of the Federal University of Mato Grosso and, Since August 1989, is artistic director and conductor of the choir UFMT, with which participates in several presentations, concerts and meetings of choirs in Cuiaba, the State and in various States of the Federation, cities in Argentina and Uruguay, In addition to concerts with the Symphonic Orchestra of UFMT. Acts as a cultural producer in the city of Cuiabá, having developed and coordinated projects like "1°, 2° and 3° international meeting of choirs of Cuiabá ", 1° and 2° Choral Panel of Mato Grosso "and has participated in other projects like" Cuiabá Delights ", "Divine Song", among others.