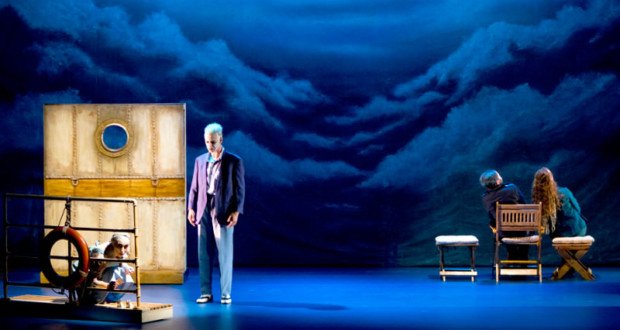 Show "Imago – a moon in the water". Photo: Disclosure.

Latin American stage production will be presented at Sesc Sorocaba

The show celebrates the centennial of the Argentine writer Julio Cortázar

The show "Imago – a moon in the water", Matula Theatre Group, will be staged at the teatro do Sesc Sorocaba the day 10 of december, farm, at 8:0 pm. The piece is a Latin-American production and celebrates the 100 years of birth of Argentine author Julio Cortazar.

In the plot, a boy, a mother, a musician, a cook and a fish writer travel together on a ship bound for Brazil in the late 1940. Memories and fantastic situations emerge and blend to reports of passengers. Apart from their individuality, the attention is taken to bonds that are created between them, the coexistence of these souls inside the vessel that was supposed to take them to another place.

"Imago – a moon in the water" is an international production involving artists from Brazil and Chile around the work of the Argentine writer Julio Cortázar. With cinematic style and uncanny rhythm, the play if it's recurring images of literature of Cortazar to give life to five characters in a boat. Fantastic situations, like rabbits that spring from the mouth, two people who might be the same, temporal games, animals who behave like men, intimate stories and ambiguities, In addition to the author's autobiographical elements, are counted in this piece.

With 15 years of existence, Matula Theatre Group is a collective of artists working in and out of the scene. Develops activities based on the work of the actor which include various aspects of theatre: the creation and circulation of spectacles to the formation and development of methodologies that have focused on the procedures involving the scenic experience. The shows, along with workshops and technical demonstrations, are held in various regions of Brazil and abroad, in particular, Germany, Mexico, Italy and Portugal.

For the artistic creations, the Group has had as its inspiration the contact with street population, women living in rural settlements, families of small circuses and refugees. The interface with the literature also referenced creations that had as its starting point the adaptation of stories by Hilda Hilst, Mia Couto, and Julio Cortázar. Learn more about the Group Theater in Matula: www.grupomatulateatro.com.

Tickets
$ 5.00 – Full Credential – Worker of trade in goods, services or tourism at Sesc and enrolled dependents.
R$8,50 – Half price for students, public school servers, people with more than 60 years, retired or disabled.
R $ 8.50-one piece

Previous: Artist Read Bapi Awarded at the International Biennial of art of Germany
Next: This month Ilustradoria project promotes trade fair of zines and shows of drawings