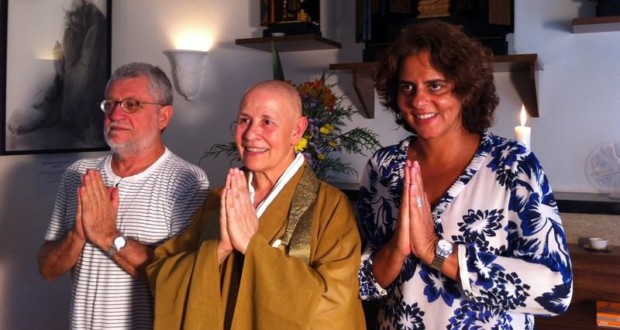 Director Adriana L. Dutra discusses the time-and the lack of it – in documentary with interviews with thinkers, scientists and writers such as André Comte-Sponville, Domenico De Masi, Nélida Piñon and Marcelo Gleiser

"A film for anyone who has time, don't have time or don't know what to do with the time ", says Adriana L. Dutra on his documentary How long time has, that will have its first exhibition in Brazil in Rio Festival, on 4 October, with special session invited the Cinépolis Lagoon, at 7:15 pm. The work, It continues the trilogy of documentaries authorial tone started with Smoking hope (2008), is part of the traditional shows Expectation – that brings together directors and new revelations of world cinema-, with views to the public in Cine Jewel (6/10), the Federal Justice Cultural Center (10/10) and Cine (11/10).

In the long, Adriana investigates the main lines of our awareness of the time listening to philosophers, physicists, architects, neuroscientists, transhumanists and even a Buddhist nun to perform a deep reflection about the civilization and the future of human existence. The Director has already begun the research for the last production of the trilogy which will address the fear.

How long time has part of an internal conflict of the Director on the subject. "All live racing against time, with an intense routine appointments. We live in a different time. Run always, We run without reason, We run for nothing. It is as if time had been faster. Everything suggests speed, urgency, our lives are always tied to the duty of any task. So that now, After all, by that time seems so short?”, questions Adriana. Thus, through rich characters – among the interviewees are André Comte-Sponville, Domenico De Masi, Nélida Piñon and Marcelo Gleiser, among many others –, Adriana is a way of trying to explain the various human relations over time.

The documentary covers relations with new technologies and globalisation – which happens with a constant increase in production, growing and content and information simultaneously. Privacy sharing through social networks is also parsed: currently, via cell phones, computers, facebook, Twitter and conference calls, the identity multiplies and is present everywhere at the same time. The simple act of contemplating lost on the immense amount of incentives offered.

How long time has account with codireção and Director of photography of Walter Carvalho and distribution for films by EH Movies. The documentary is licensed for display in Short Channel TV! and international distribution by Synapse. Recently he was invited to assessment of the official selection of the Berlin Film Festival, In addition to having been selected for the Festival du Cinéma Brésilien 17ème Paris.

Is Executive Director and founder of Inffinito, responsible for the creation and production of Inffinito Circuit of festivals, composed of Brazilian cinema festivals in many cities of the world: Miami, New York, London, Barcelona, Madrid, Rome, Buenos Aires, Vancouver, Montevideo and Straws. He idealized the online platform, and fundraising for the audiovisual sector, the MediaFundMarket.com. Idealizes and produces cultural events, as the summer of the river, and sociocultural, as Cinema and the B-A-Bah of the national Cinema.

Adriana wrote, He directed and produced the feature film Smoking Hope, Copyright language documentary, He participated in several national and international festivals and won great success, remaining seven weeks in Brazilian business circuit, In addition to having been turned into miniseries displayed on TV in Brazil.

His latest documentary, He was also selected in three grant programs, being they: Riofilme/SEC 2011 project development; SAV/MINC feature film production (B.) and RioFilme 2013 feature film production. Before the selection by edicts cited, the project was selected by the LabTransmídia of the RioContentMarket (2011), where was enhanced its character TransMedia.

How long time has -Shows Expectation 2015

Interviewed in order of appearance in the movie:

Tom Chatfield-writer and theorist of technology