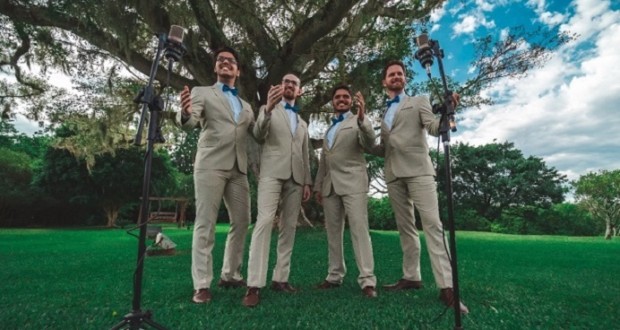 A Vocal Live is a male vocal quartet will be the next attraction of Ecarta Musical in 24 April, 18 hours, with online presentation of 12 arranjos de composições nacionais e internacionais. Ao estilo Barbershop Quartet, of North American origin, the group debuted in June 2018, and has since performed in recitals and concerts, in addition to presentations at events and ceremonies throughout Rio Grande do Sul.

The quartet is formed by Aramis Majlínski, Bruno Mezzomo, Guilherme Roman and Lucas Alves. O vocalista principal (lead) is Aramis Majlínski. Graduated in music theory and recorder from the Conservatory of Fine Arts of Erechim, performed in the Ospa Symphonic Choir and in the Ufrgs Choir and participated in festivals in Rio Grande do Sul, in the State of Paraná, in the State of Minas Gerais, in Argentina and Chile.

Bruno Mezzomo is the bass tone of the group. He started studying music at the age of six, and also integrated the Ospa Symphonic Choir and participates in the Ufrgs Choir where he has already acted as artistic director.

Lucas Alves is a tenor and is currently conductor of several vocal and choral groups, among them the Ufrgs Choir. As a singer, worked at Ospa, Unisex, Ulbra and Osucs. Iniciou os estudos no projeto prelúdio da Ufrgs, where he graduated in coral conducting.

The group's repertoire consists entirely of covers of national and international music, most arranged by the group or commissioned from other arrangers.

For the presentation at Ecarta Musical, Vocal Live prepared 12 songs that range from Brazilian compositions by AnaVitória and the others in English by diverse groups and singers like Jackson 5, Beatles, Elton John, Elvis presley, Paul Simon, Ed Sheran, Phill Collins, among others.