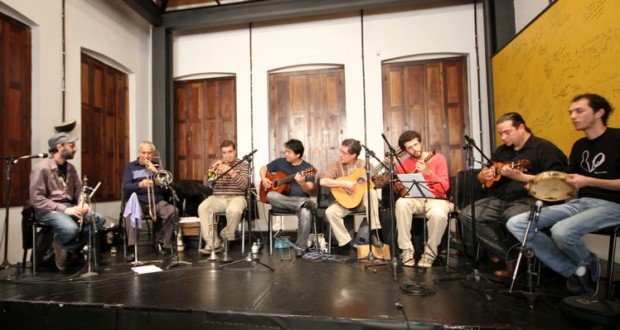 Thursday is day Cry wheel at the Conservatory of MUSIC

Thursday is day Cry wheel at the Conservatory of MUSIC

The traditional Cry wheel back the weekly schedule of the Conservatory of MUSIC of Curitiba. The program brings together informally local artists and the public interested in chorinho with performances every Thursday, a partir the 17h, under the command of Jain Bohemian (ukulele) and Lucas Manu (violão 7 strings). Admission is free.

The two players who received the participants are references in the Curitiba music scene. The guitarist Lucas Melo takes part in major groups of cry of the city, among them crying and Serenades and Curitibocas in the Cry. Recognized for the ability to play the guitar, popular and classic, In addition to ukulele, the player also shows his virtuosity on the guitar 7 strings, being requested to accompany various artists.

The cavaquinista Jain's Bohemian composer from crying, maxixes and polkas, scholar and professor of ukulele. Julian began his professional career after joining at the Conservatory of MUSIC of Curitiba, at the age of 15 years old. Conquered its space as a performer sharing the stage with prominent names, among them Nelson Sargento, Guilherme de Brito, Night Illustrated, Yamandu Costa, Mônica Salmaso, Ceumar, Dominguinhos and Zé Renato.

His first solo CD, “Beans in the tooth”, It was released in 2010 and gathers compositions such as Lemon in my armpit and Navel without background, In addition to the title track recording. To compose, the musician is inspired by the life and daily life, always with very good mood.

Tradition -The wheel of weeping is a program held weekly by the Cultural Foundation of Curitiba, since 2003. The grieving music, the first feature sets that have sprung up in backyards and the suburbs of Rio de Janeiro, in the century 19, causes the chorinho stands for accurate technique of instrumentalists and the possibility of improvisation.

During the wheel of cry, flutes, mandolins, ukuleles and guitars make up the set of instruments that guarantee moments of virtuosity and relaxation. There is no specific training, and the musicians who arrive come together around.

One of the central figures of the crying was the carioca Joaquim Antônio Callado (1848 – 1880) considered one of its creators. The music Loving Flower, composed by him, It is noted as the first composition of this music genre. Other whiners are Chiquinha Gonzaga, Ernesto Nazareth and Pixinguinha.

The cry inspired the composers Brazilian scholars, among them Heitor Villa-Lobos, in "the Cries" one of his most important creations. Classical music also inspired the whiners, as the flutist Altamiro Carrilho, who recorded albums called "classics in Crying", in which plays classical music with an accent of crying.

Previous: Dan Torres presents the Armory songs for soap operas
Next: “Paranã” premiere this Thursday at the Teatro Curitibanas Novels