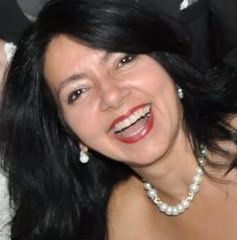 Rosângela Vig is a Visual Artist and Professor of Art History at UNIP.

I have dedicated myself to drawing since I was a kid. At principal as an admirer of colors and pencils. I felt passionate to succeed in transforming a blank paper in drawings that my imagination created.

With the time I've been transforming my taste to a hobby and dedicating myself and perfecting. I took a course in São Paulo, but what always brought me inspiration was watching the movements of things, of people, perceive their shadows, lights and colors of the most diverse tones.

I started to draw castles, casarios with graphite pencil and crayons. I never get tired of seeing details in old buildings in Venice, which earned me enough inspiration to get the first prize. Since then began a frenetic production that today sum over two hundred paintings. With the encouragement of my husband and my daughter have participated in exhibitions, catalogues and magazines that circulate in the country. I am doing Masters in Communication and Culture, which helps me to define styles and see the art as a means of expressing ideas.

Currently I find myself in a more modern phase, with geometric lines, cubist and colorful and still do castles, but a more current design. My artworks are now with graphite, pencil and canvas. I feel fulfilled when I see a ready canvas and every day I perceive a new idea and a new image. From each trip, of each place I visit I bring a different style and often take papers and pencil to sketch the drawings right there that will turn into canvas that I imagine.

I love what I do and I know I have something new to learn every day.

Collection of over two hundred artworks made with graphite, color pencil, canvas and oily pastel.

Detailed Exhibitions, Prizes and Publications on the Field of Art:

“Mrs. Rosângela, already been in touch a few times but this time our director, historian and art critic Mali Villas-Bôas knew your artworks on the Catalogue Vernissage at this year edition, and wove the following comment: “I really liked the fragmentation of forms”, and put me on a mission to get in touch, therefore we would be interest in assisting and representing You in Sao Paulo, or simply exhibit your artworks in our projects. Also to better know our work we ask you to visit ". – GALERIA MALI VILLAS-BÔAS

“Your artworks are wonderful, fantastic, Congratulations “.

Your artworks were highly commended. Congratulations!

First I want to congratulate you for the beautiful artworks that I met through the links you sent,

This year we are celebrating the 10th. Edition of the Anuário Brasileiro de Artes Plásticas, so it will be a special edition that will come out in November where we will also reward the artists.

I am forwarding some information about the book, as the page template and values ​​to participate.

Link to the program: http://www.youtube.com/watch?v=L_GqyFKysdY (Watch this Video Below)

See All the ArtWorks of the Visual Artist in Exhibition at the Virtual Gallery.

Meireles exhibition in Rio is extended until 29 January

In the year that celebrates 25 years, IEL has special holiday schedule

"The way to get happiness is by making other people happy." Robert Baden-Powell