Posted by: Artworks in Artists of the Website, Highlights 21 of September of 2013 9 Comments 2,400 Views

Santiago Ribeiro is a Visual Artist and Writer.

Since children have demonstrated a strong interest and passion for art, influenced directly by his city Carnival, by seeing the parades of the Samba Schools. With the passage of time perfected and reinvented new techniques in the design of his art, signaling his own style, as a personal brand, regardless of which is the profile of the artwork: baroque or modern, allegorical or rustic, folk or futuristic.

The art of literature also came into his life, already in the early 90. His first book, still handwritten, was the novel "The House Cursed" of 1991. Today has in collection of nearly 27 books, between romances, chronic, poetry, plays and short stories.

In the mid- 2000, initiated a new form of art: the bonding with paper consisting solely of various papers and glue, without ink or any other element. These vary according to the inspiration and the clean style of these collages is one of its brands.

The installations – conceptual artwork that integrates space as aesthetic component – also become part of the motto of his creations. In this segment of art, the artist always refers to the current issues and social, expressing hsi point of view in these works, who, and often, are not fully understood. As an example, the controversial installation "The Cage" for 2007, where the artist cited Nazism in strong images, and were censored by space which was shown.

In his resume lists 19 exhibitions, between collective and individual, several awards in the literary arts and in the arts: Flávio Gagliardi Award of Plastic Arts 2010, as a highlight of the year.

His main exhibitions are:

Book turns poetry into a mosaic of feelings 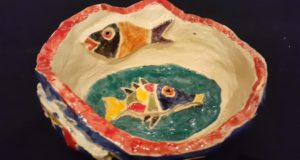