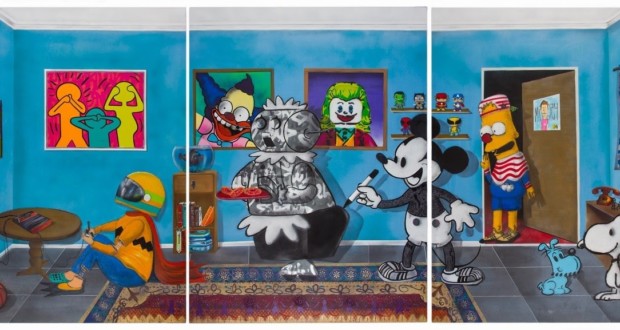 Shows 360 is available for free and 50% profit reverts to families who lost income because of the Coronavirus. The exhibition lasts 3 months – 11 April to 11 July

Three artists in search of the measure of a quantity which forms a proportion. Sergio Free, Fabio polish and German Art unite their styles and ideals 19 works exhibited in shows online Rule of three, not a Saturday opening,11 April, a version 360º at website regrade3.com. The curator is Kleber pagu and Fernanda Well (@centraldocentro), and the exposure is made up of painted canvas to six hands, sharing techniques, overcome the difficulty of improvisation and elevate creativity. And in this round table, that instead of voices, there are paintings, there is also a social action: 50% the value sold will be donated to the poor who lost income because of the Covid-19.

"From this meeting did the challenge and dividing the empty space occupy the same balanced and synergistically, one should freely interfere with the work of other, running the risk of dilution of individual characteristics. A complex proposal in contemporary arts universe, in which, sometimes, the signature of the artist is more valuable than content – a cutout of society. Give up the "I" for "we", seek the Rule of Three as a proposal for dialogue demanded of artists testing the acceptance of the other, not as a foreign element but aggregator ", says the curator.

The idea came after their participation in The Off Project, a group exhibition in Miami, in December 2019, What happens in the period of Art Basel. Together they have been in a festival Graffiti, visited fairs, museums and prestigious galleries – from now on, They began to create the screens together in order to transform all learning. The exhibition takes place in a historical moment in which humanity is being marked by the breakdown of major paradigms and the collective is essential shows. the largest global confinement before seen, combat COVID-19 virus reveals one of the faces of this reinvention.

"I hope people can feel the energy of the three artists when they see the works. We want to create a new concept of making art, to create as a collective ", German comments, whose main inspiration the playful surrealism. Known as German Art, lives of his drawings almost 10 years, but before that it was art teacher. After selling four works for a French investor, He climbed on career and has traveled with exhibits and paintings for over 30 countries.

To Sergio Free, recognized by the symbolic panels with social criticism, this experience says a lot about the control of the ego. “These creations say a lot about our technical learning and our evolution, as artists and even human. We are putting into practice what we absorb this trip and want to share this information with all ", comments. Sergio has arts spread through the walls of São Paulo since the early 90. Over the years it has been developing and 2012 He created a character who interacts with several urban settings. already sum 11 exhibitions, with five singles and an international. Among the shows, highlights IV International Biennial of Graffiti Fine Art and the Latin American Memorial.

With more than 30 year career, Fabio polish He has starred in several areas with their talent: since tattoo, realism pen and ink the mosaics and graffiti. Currently focuses on Pop Art Street. "I think the art scene has been reaching new audiences and markets. And bring this exhibition is also part of this movement, the union and new concepts ", reflects Poles, that on your resume has exhibits in Sao Paulo, New York, Los Angeles, Miami and Israel. Among his works, highlights a graffiti that made the MIS-SP, Viva the Wall project, in what was the first artist to occupy the space.

"The colors of fantastic universe created by German Art, come your copyright characters and displaced conquered Louvre. In contrast to the mood icon and symbol of American dream, he is a Mr Bozo. Ronald McDonald de Sérgio Free, They appear as an ordinary man, bored and decadent that chews gum and poses for photos of fans who still recognize. Fabio polish, reveals in his work the frenzy of cultural industry, busy keeping the crowd entertained with heroes and villains, classic stories, cut and pasted countless times, which leads us to reflect on the words of the artist "art is not a crime" to be a statement or question ", explains Pagu.

Previous: Free art project on Instagram stimulates create visual works on coronavirus and COVID-19
Next: "The power of art in times of crisis" by Edson Siquara