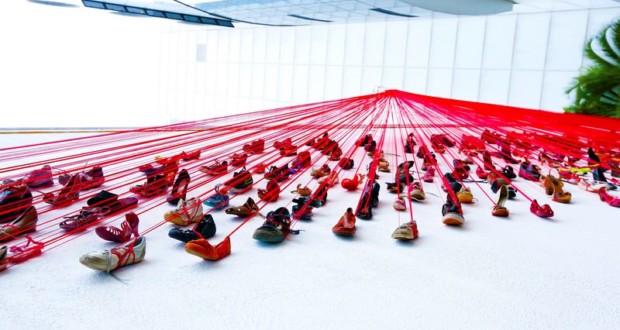 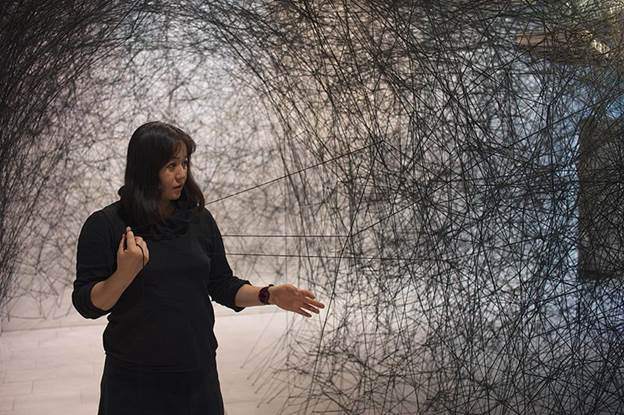 A Sesc Pinheiros receives, September 2015 to January 2016, the shows "Chiharu Shiota-in search of destiny", first exhibition in Latin America of the work of Chiharu Shiota, Japanese artist dedicated to major facilities formed by extensive plots of wires and everyday objects used-feature that took the British newspaper The Guardian to set it to "a spider woman climbing around the human unconscious meshes".

Curated the art historian Tereza de Arruda, the show – which occurs simultaneously to the artist's participation in 56Biennale of Venice, which was chosen to represent Japan – houses three works, "In addition to the continents", "Accumulation" and "Letters of thanks", mapping an exhibition route continued in different spaces and discuss issues such as memories and trajectories. In this experiment, Chiharu, How do projects around the world, invited people of all ages to participate in the construction of their work through the donation of shoes and handwritten letters with messages of thanks, added as raw materials from exposure to a collection of bags scrutinized by the artist in Germany, where you live since 1996.

As a result, to experience the facilities, the visitor has before him, initially, the path of the artist herself: are synthesized in these works his first artistic initiatives, even in Japan, the move to Berlin and the subsequent maturing of his performance in the European context. Following, the visitor is invited to take a seat of poetic inflection, caused by the contrast between the simplicity of the resources chosen by Chiharu and the narrative potential of the imaginary architected from them – few objects expose and hide, reveal and preserve or are, at the same time, so intimate and public as letters, bags and shoes. 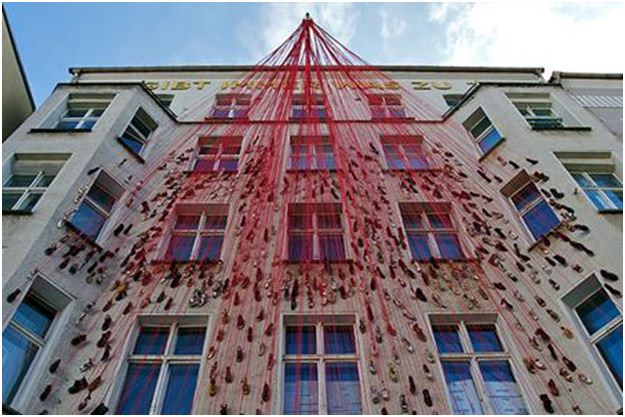 Installation with shoes developed in 2008 in Germany. Photo: Disclosure.

1th installation: "In addition to the continents"

Located on the façade of the Sesc Pinheiros, where can be seen by anyone, inside or outside the unit, the installation "continents" represents an introduction to the work of Chiharu Shiota. Is formed by 300 pairs of shoes donated by the public. Suspended on wires red wool and aligned in the same direction, represent metonímias of life trajectories: shoes worn by using carry the marks of time, becoming witnesses of individual experiences, in this context the scope expanded to collective. 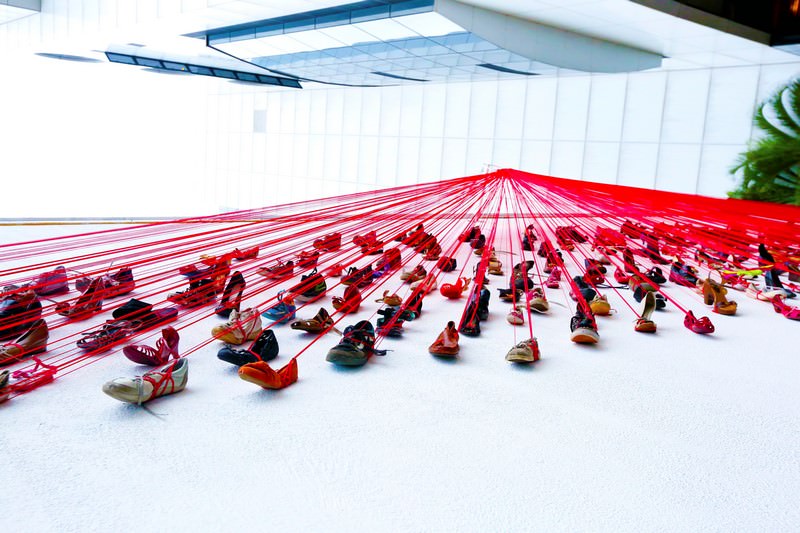 The second installation, located on the ground floor of the Sesc Pinheiros, presents an unusual cloud of bags that float on escalators and moving, triggered by a sensor, during the passage of the public, a continuous flow along with the natural transit of ascent and descent the stairs. The resulting visual effect suggests the composition of transient universe, temporary, passing-places not features, or the places that resist residence. The 200 bags were acquired by the artist in Berlin, in used products and antiques fairs. 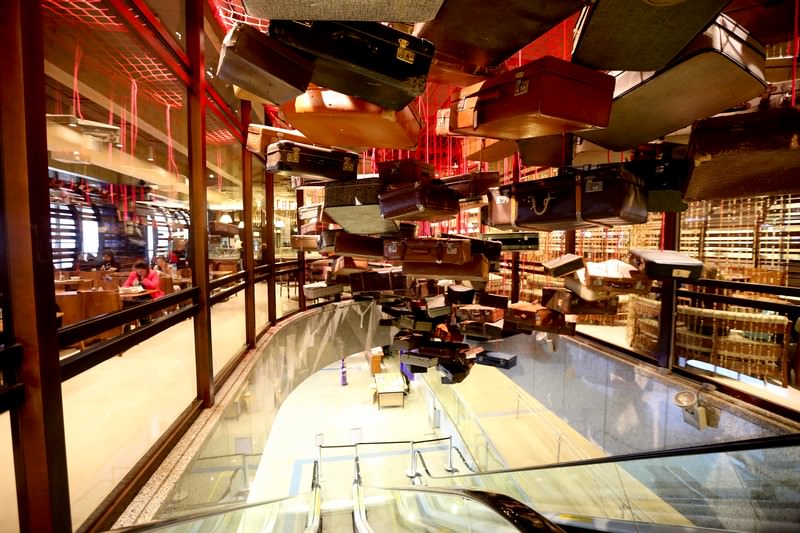 3th installation: "Letters of thanks"

The installation was born as an impulse of gratitude of the artist and personal contexts varied, in an attempt to encourage people to transpose in words the feelings that, normally, are difficult to verbalize.

Proposal in order to convey to the visitor the feeling of hospitality, the work occupies the entire exhibition space (2º andar) the Sesc Pinheiros, surprising the logo at the entrance due to the complexity of the plot built with the 6 thousand letters collected by the Australian public. The only requirements for participation are that the letters were handwritten and express messages of thanks, regardless of the reason. During the exhibition, the letters may be read by the public. 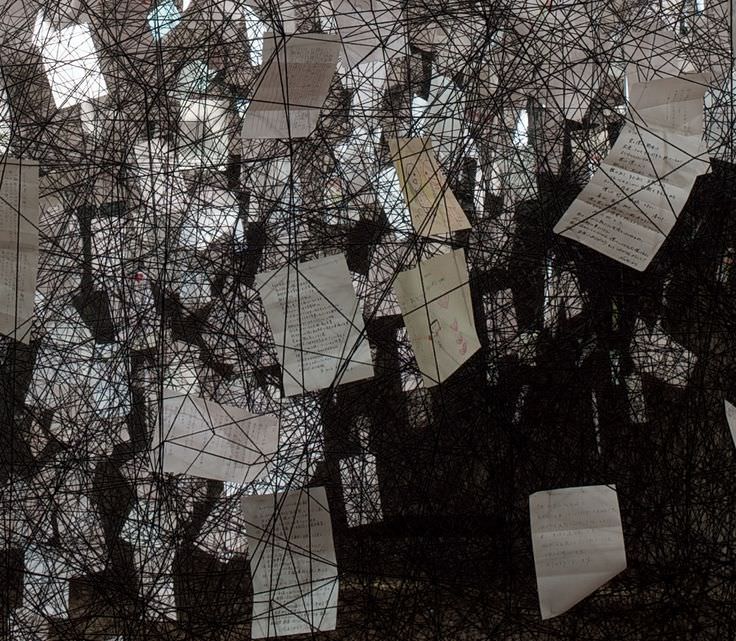 Letter of Thanks. Photo: Disclosure.

More about the collection process

Developed over the course of two months by a specialized team of educators, the actions of collecting letters of thanks and shoes for the exhibition "Chiharu Shiota-in search of destiny involved workshops and performances held permanently at Sesc Pinheiros, In addition to visits to free fairs, schools, subway stations and other spaces of the city of São Paulo, in which interventions and horseplay were proposed for public awareness. Receipt of the letters was also possible via post offices and for digital media, with a photo of the handwritten letter by email and social networks, together with the hashtag #embuscadodestino. 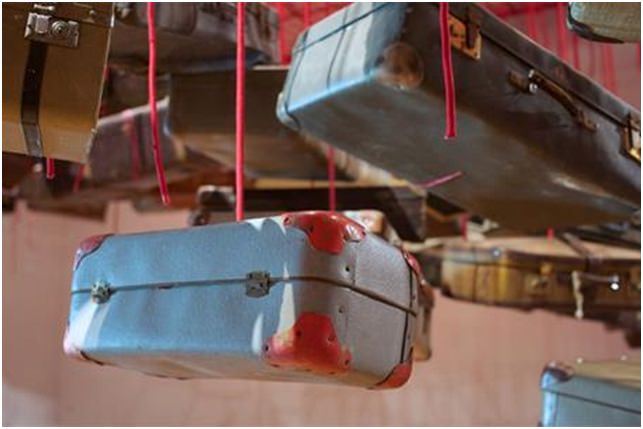 Detail of the installation with bags exposed on 2014, in South Korea. Photo Credit: Sunhi Mang. 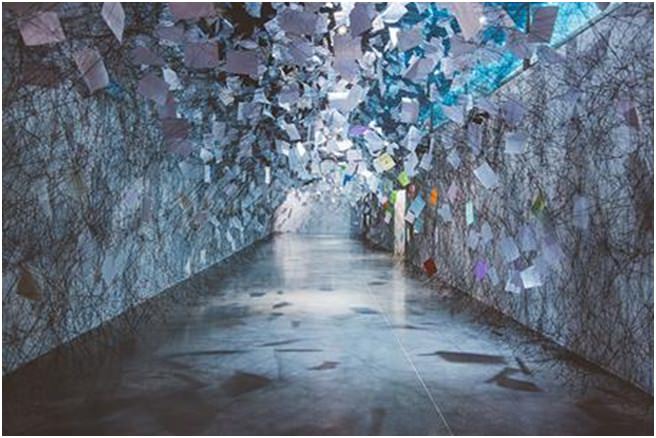 Born in 1972 Osaka, in Japan, Chiharu Shiota lives and works since 1996 in Berlin, where he studied fine arts with Rebecca Horn and Marina Abramovic, that prompted the interest in performance in his first artistic experiences. Later on, Chiharu decided to develop large facilities also, This path that entered definitely in the international art scene: in experiments around the world, to suspend on strands, organize or stack objects used as letters, keys, beds, bags and shoes, the artist took to build real webs sustained by the past and the present, maturing a style in which the narrative load works combines intimate experiences shared and comungadas with the public.

Detail of the installation with bags exposed on 2014, in South Korea. Photo Credit: Sunhi Mang.

Letter of Thanks. Photo: Disclosure.

Installation with shoes developed in 2008 in Germany. Photo: Disclosure.

Previous: The trash will be under discussion in the session + Philos Globosat
Next: Sunday afternoons recalls songs and artists that have marked generations