Directed by Ricardo Gali, Duet is inspired by speeches
the English artist Banksy in partnership with the graffiti artists
The Brazilian Twins 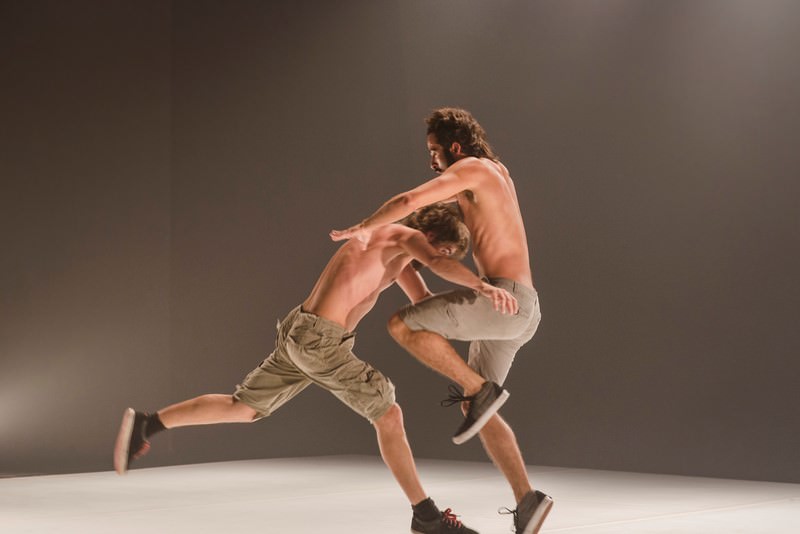 In the September issue of the project CHOREOGRAPHIC, the Sesc Pinheiros gets the show "Movement For One Man", of CLA. Wicked Polymorphs. The presentations are free and take place from 22 to 30 September (Tuesdays and Wednesdays), to 20h30, at Square of the unit.

The Duet is inspired interventions created by English artist Banksy in partnership with the Brazilian graffiti The Twins. The works were part of the occupation "Better out than in", held in New York, in October 2013.

In the show, the irony of Banksy is present in extended gestures and interrelation of movement, in which the interpreters suggest a variety of readings, from the intersection of languages.

The Cla. Wicked Polymorphs appeared in 2005 under the direction of Ricardo Gali with the proposal to bring together various artists around the discussion of contemporary performing arts (dance and theatre) and the ability to interface with other emerging arts. In 2013 It was contemplated by the 18th Cultura Inglesa Festival for development of the "movement for a man".

About Ricardo Gali
Formed by EAD (School of dramatic art – ECA/USP), studied at CPT (Theatrical Research Center, coordinated by Antunes Filho) and studied at FMU audiovisual. He served as Director in "(Proto)"HamletMaschine, "Phaedra's Love", Banksy's "Bang" and "Craving", of Cla. Wicked Polymorphs. Co-directed, with mistress Jane Fadel, "Will, a scenic landscape ", in 2012. Part of the creative team of the Cia. The Brick as trainer and Director of body movement in the projects "Cantata for a Rack of Utopias" and "Under the lamplight the corner". Currently runs the show "movement for a man" (CLA. Wicked Polymorphs) and continues as Director of Cia movement. The Brick.

About Cla. Wicked Polymorphs
The company Wicked Polymorphs appeared in 2005, under the direction of Ricardo Gali, with the proposal to bring together various artists around the discussion of contemporary performing arts (dance and theatre) and the ability to interface with other emerging arts. Produced the spectacle of theatre-dance "(Proto)"HamletMaschine, inspired by the text "Hamletmachine", of Heiner Müller. Then, from the need to explore the word, staged "Phaedra's Love", by Sarah Kane, that was playing at the theatre Factory SP and at the Centro Cultural São Paulo, in the year 2008. In the same year, the band produced the event "Friday of the wicked", one Lounge culture whose main objective was to provide means of dissemination, discussion and movement of contemporary dramaturgy and performance. In the project off stage-Site Specific (at Sesc Pinheiros), the company debuted "Craving", inspired by the text "Crave", by Sarah Kane, and in the work of the artist David Hockney. The show was nominated for 7 Awards Bravo! Bradesco Prime culture in the category best national dance Show of the year 2011. The company received the prize Funarte Dance Klauss Vianna (2010) with the show "Banksy Bang" and was awarded the 13th edition of the Municipal program of promotion of dance for the city of São Paulo to the creation of the show "image-naked and other tales". In 2013, started production of "movement for one man" in partnership with the 16th Cultura Inglesa Festival.

Previous: The Beatles, The greatest Hits and videos together for the first time
Next: Cine Guarani participates in the programming of 9th Spring of the Museums