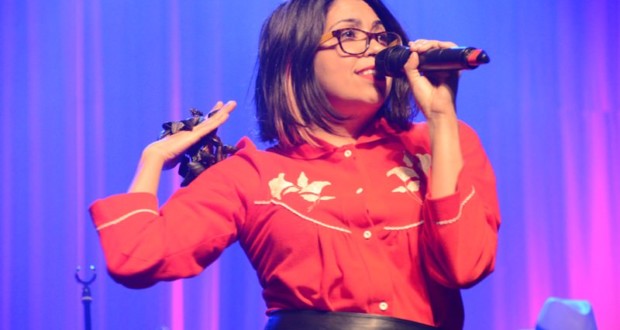 The new project "Cio of the Earth", SESC Sorocaba, brings, from this month, a series of concerts dedicated to the launch of artists materials in the region of Sorocaba. The premiere will be on the singer/songwriter Paula Cavalciuk, that will perform in the theater of the day unit 12 of december, Saturday, at 8:0 pm, at a concert that celebrates his recent EP (Extended Play) and brings the audience new songs. Tickets are available in the call center and the values vary between 53 ha.and 25 ha beside (entire), $ 10.00 (half – for students, retirees, servers public schools and people with more than sixty years) and $ 6.00 for full credential.

After the victory of the 10th Prize Sorocaba and music resonate with the release of the video "Invisible", singer/songwriter releases his first authorial work in EP format, titled "maps". After signing tour, Paula returns the Sorocaba for a unique presentation, with special guests and, In addition to the songs of "maps", others who will be part of your next job, that's scheduled for release 2016.

With influences ranging from pop-rock to the backcountry of root, passing by Brazilian Popular Music, Blues, Jazz and country, Paula Cavalciuk blooms with personality and is one of the big bets on national alternative music scene.

Paula Cavalciuk won, in August this year, the first place in the 10th edition of Sorocaba Music Award, with the composition "the collector of Reviews". Promoted by the city of Sorocaba, through the Secretariat of culture (Secult), with the Z-Events organization, the festival encouraged copyright compositions of MPB, In addition to promoting artistic and cultural exchange, reveal new talents and reward the competitors by encouraging the professional production of his art.

Released in 14 October 2015, the EP "Maps" was the production of Italian Ribeiro and was co-produced by Gustavo Ruiz and Bruno Buarque, In addition to bringing participation of John Leopold (piano), Gustavo Ruiz (low), Beard Marques (percussion), Diego Gabriel (trumpet) and Sergio Miguel (accordion). The album is available for listening and free download on site www.paulacavalciuk.com.br.

Previous: Winning works of the Ibema Award on display at the Museum of Engraving
Next: Jedicon brings together Star Wars fans in the Cultural Gate