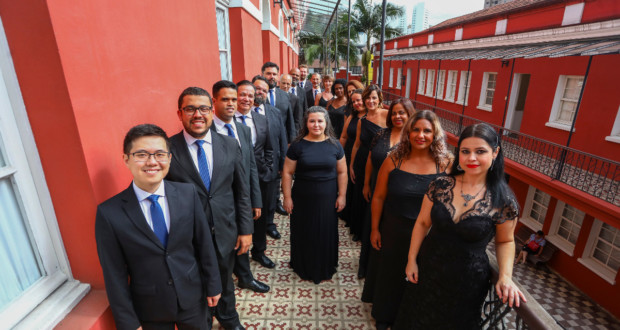 Members of Camerata Antiqua pose for photos in the spaces of Solar do Barão - Curitiba, 11/01/2019. Photo: Daniel Castilian / SMCS.

Work coral and American Regent are the highlights of the concerts that the Camerata Antiqua Choir of Curitiba shows on Friday (23) it is Saturday (24). Who holds the baton is the conductor Angela Broeker for a celebrated repertoire, covering different times, bringing from classical composer William Billings to as contemporary as Z. Randall Stroope, Stephen Paulus e Eric Whitacre.

The theme 'An American Tapestry' defines what should be expected by the public for concerts. "They are traditional choral music programs in the United States. Certainly the public can hear and identify with some works or excerpts ", He commented on the award-winning conductor.

Several American choral movement phases are inserted in the program. Altogether 10 composers will be performed. The concert opens with William Billings, It is the first piece in the Singing School style, after two plays with a Catholic mass texts, Glory from the Spirit of Dominick Argento from Boosey, respectively.

The concert continued with Daniel Elder presents instrumental colors that help illuminate the text message. Round two of the most prolific American songwriters, In. Randall Stroope e Stephen Paulus.

Follows the Program own styles composers. "No US choral music program is complete without the representation of Eric Whitacre and Morten Lauridsen", he explained Broeker. Closes the concert gospel choir work of african-American tradition, Stacey Gibbs. His arrangements combine traditional techniques with a beautiful harmonic language.

Angela Broeker is director of choral activities at the University of St. Thomas, where driving Chamber Choir, Concert Choir and the Festival Choir, Minister of undergraduate and postgraduate studies in choral conducting, coral and coral literature teaching. The international conducting works include choirs in Tokyo, Hong Kong, Seoul and the United Arab Emirates. He wrote articles for the Choral Journal in 2006, 2008 and 2011. Other publications include the Music Educators Journal July 2000, o NAfME Spotlight on Teaching Chorus, as well as many other choral music publications. The book which is co-author with Mary Goetze and Ruth Boshkoff, Educating Young Singers, It was published by GIA.

Previous: strengthening project of the Rio Art Museum, held sponsored by BNDES, reopened on 24 August the new Library and Documentation Center SEA
Next: river Memories, virtual museum that tells the history of the city, It will be released 28 August, in the center of Rio de Janeiro