Regina Silveira, Vik Muniz, United VJs and more 15 artists from all over the country participate in festival
on Praça Mauá, days 11 and 12 September. M. Park (6) and Brazil's Central (8)
also receive projections from guests 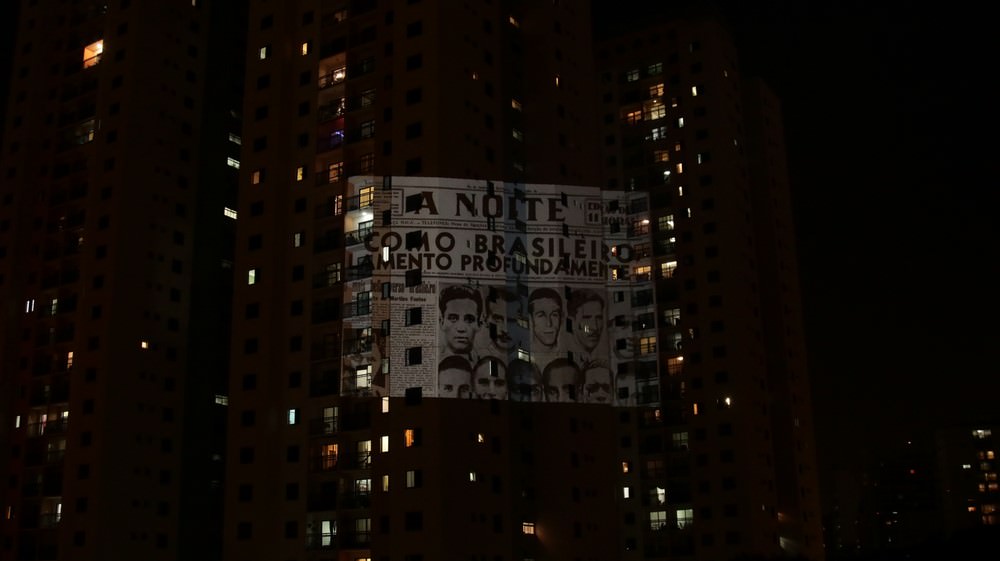 The Festival Art and Technology Visualismo City offers in September projections of 26 outdoor audiovisual works in Rio de Janeiro. Created as a way to discuss the future of the collective spaces today, the project involves actions that integrate Trustees, thinkers, students, artists of different areas and the general public. One of the main challenges of the initiative is to think of the cities and its multiple forms of ownership and, for that, fostered the development of artwork that left around where research will be designed. The works completed, created especially for the Visualismo, will be displayed in the Praça Mauá on 11 and 12 September in an event totally open to the public. The project will also perform projections of guest artists in the Park Madureira (6 September) and Brazil's Central (8 September). Designed and produced by Renata Sbardelini (Barn Owl and Radar Network) and Leticia Monte (Spiral), with the curator of the multimedia artist Lucas Bambozzi, the project's realization of Pontofrio and the Ministry of culture through the law of incentive to the culture – Rouanet law.

Coordinated by Bambozzi, the curatorial Council-composed by Batman Zavareze, Patricia Moran, and Henry Roscoe-, made a mapping of 180 artists, representatives of the Visual arts scene in the various regions of the country. Of this group, 30 individual proposals, in a careful step call to artists. The 15 selected by the curator and the guests Vik Muniz (RJ), Regina Silveira (SP) and United VJs (SP) are producing works created especially for projections on the ceiling of the Museum of art of River-SEA, in the building the Night, in other buildings in the surroundings of Praça Mauá. Eder Santos (MG) and the pair Gisela Motta (SP) and Leandro Lima (SP) were invited and will also have works designed during the Festival, at the Park in Central Brazil Madureira.

The selected by the curatorial Council Roberta Ch (PA), Milton Marques (DF), Yuri Firmness (PE), Lirio Ferreira (PE), Virginia dare (BA), Alice Miceli (RJ), André Parente (MG), Marilá Dardot (MG), Gaius Fazolin (SP), Duva (SP), Jonathan Ciampa-Embolex (SP), Raimo Benedetti (SP), Leandro Mendes (SC), Kátia Maciel (RJ) and Marcus Bastos (SP) participated in July VisualismoLab, where had the opportunity to optimize the development and viability of his works, addressing conceptual and technical issues in a collective immersion with the curator and the experts invited. The project still promoted a seminar open to the public which discussed the challenges of appropriation of public space and the prospects of technological support for artistic events. "The languages of works created for the Visualismo question the rigidity of predefined formats. The challenge given to the artists is to have as protagonist the unusual props that are in town, in its architecture. Are interventions with video projections in large scale spaces that carry historical and social meanings and are the property of all, that motivate an artistic interpretation ", explains Bambozzi.

During the Visualismo Art and Technology Festival City the public space will be permeated by the art and the creative thinking of the invited artists and selected, including both the works produced especially for the project, as adapted work. Display locations, M. Park (6), Brazil's Central (8) and Praça Mauá (11 and 12), will serve as stage of projections ranging from video mappings, video-performances and installations the immersive audiovisual performances. "The interventions suggest forms of ressignification of public spaces, prospects for the enjoyment of visual culture and connection to the city ", says Renata Sbardelini, who, alongside Leticia Monte, is one of the creators of the initiative that aims to extend over the years, proposing positive experiences of resumption of collective spaces and the art as a means and as a bridge technology. Leticia still emphasizes the formative aspect of the proposal: “There was a special care in providing the artists involved the ideal conditions to think about a new project, with all the characteristics which this involves, both conceptual techniques, with attention and availability monitoring are rarely given to artist in edicts and other projects to promote”.

The project is also the approach affinity between the bidders and the sponsor. "We believe in proposals capable of uniting art and technology, allowing innovation to develop, include and connect people, resign their relationships with themselves and with the city ", Susy says Yoshimura, Director of the Foundation Via Retail, responsible for investments in social projects of the retailer. "The Visualismo is adherent to concept adopted by Pontofrio and presents the innovative culture, accessible and democratic ", Susy full Yoshimura. 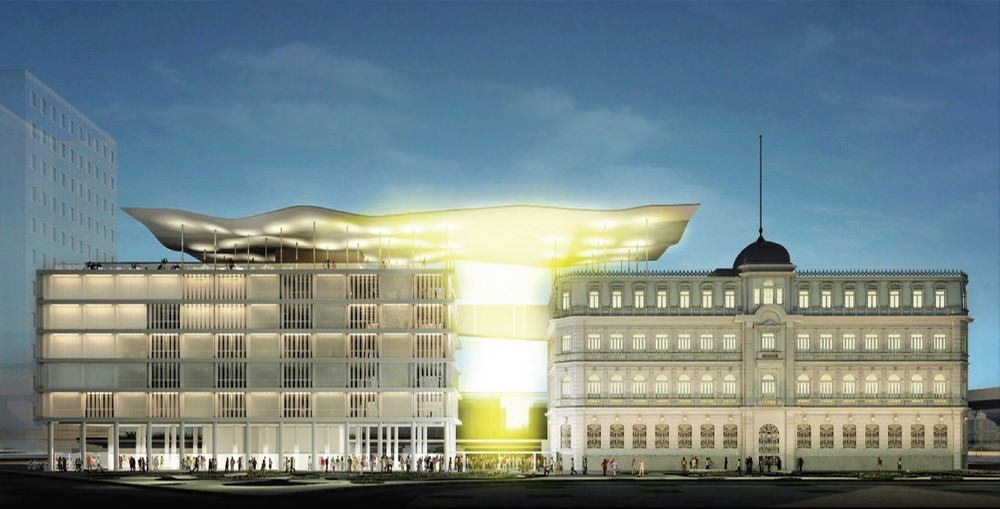 21h-22 h: DANCE CHARM OF THE VIADUCT OF MADUREIRA

17h-11:00 pm: URBAN ACTIONS ASSOCIATED WITH THE GUM AND OTHER COLLECTIVES

17H-11:00 pm: URBAN ACTIONS ASSOCIATED WITH THE GUM AND OTHER COLLECTIVES

Renata Sbardelini graduated in communication (PUC-PR), has specialization in Sustainability (FGV), Corporate Responsibility (FGV) and Marketing (UFPR), MBA Team Managment (FGV) and immersion in Theory U (MIT-Massachusetts Institute of Technology and FGV). In 2011 founded the Barn Owl and Radar Network, After spending more than 15 years in large companies, as Ambev and Natura. His career in the corporate world was marked by leading the development of programs and discussions related to contemporary themes, as culture and sustainability, including the building and strengthening of the network of informants linked to these themes. As a natural consequence of this way, the Barn Owl and Radar Network was born with the purpose of contributing to the development of innovative projects addressing relevant issues, as well as mediating the relationship between the private sector, producers, artists, Government and Ngos.

Leticia Monte is artist, Curator, cultural producer and managing partner of spiral. Among his recent accomplishments are the planning and coordination of production of art film and exposure Transbarroco, of Adriana Varejao (August/2014), and art film The Ghost in Between, Janaina Tschape hosting (SP, NY, 2013); planning and direction of the exhibition production Amilcar de Castro-Repetition and synthesis (CCBB/BH, 2013); University management of Broken/PACC UFRJ (UFRJ, MAR, 2010 to the present); Executive direction and concept of the exhibition Crossings of contemporary art (RJ, 2011) and the gate room LABE (RJ, 2012); associate producer of documentaries The Music According To Tom Jobim (2011) and Mystery of Samba (2008); Coordination of production and display of Destricted.Br art films with several Brazilian artists (2010/2011); Design and general direction of the São João Carr in partnership with Lee Productions, (RJ, 2010 to the present). He is President of a citizen and founding partner of the Institute HOME.

Lucas Bambozzi is an artist and researcher in digital media. Work in media such as video, movie, installation, site-specific works, audiovisual performances and interactive projects. His works have been shown in more than 40 countries. He was curator of the Sónar SP (2004), Life Goes Mobile (2004-2005), ON_OFF Festival (Itaú Cultural, 2012-2015) and Many project (Sesc Pompeii, 2014). Is one of the creators of arte.mov Festival art in mobile media (2006-2015) and Labmovel. He was artist in residence at the CAiiA-STAR Centre/i-DAT and he completed his MPhil in philosophy of computing, at the University of Plymouth, England. Is a Ph.d. candidate at FAU-USP and professor in the Visual Arts course at FAAP in São Paulo. Is dedicated to the critical exploration of new independent media formats with emphasis on projects involving informational fields in public space. www.lucasbambozzi.net

Batman Zavareze holds a Bachelor's degree in visual communication. Started on MTV Brazil its relationship with passages by producing audiovisual Videofilmes in Rio and conspiracy Movies in the early 90, working in the area of film photography. Since 2010 does the curator of the project Happenings with spells at Centro de Artes Hélio Oiticica and in France-Brazil House. Signed art direction and technology of the shows of Marisa Monte – Truth An Illusion Tour 2012/13 and the band Paralamas do Sucesso- 30 years. Had his work published and displayed in magazines, books and exhibitions in Rio de Janeiro (CCBB/National Fine Arts Museum/Imperial Palace/Oi Futuro), Italy, Germany, Japan, Costa Rica, Portugal, France, Switzerland, China and Russia.

Henry Roscoe is audiovisual artist, musician and curator. He graduated in social communication by UFMG and electronic engineering from PUC/MG and has expertise in Design at FUMEC. With your project HOL performed in major festivals of live images in Brazil as Sónar, FILE, ON_OFF, Live Cinema, Multiplicity and also in England (NIME, Encounters), Germany (Rencontres Internationales), Poland (WRO), USA (Gameplay), Greece (AVAF), Italy (LPM and roBOt), Colombia (Festival de La Imagen) among others. Is the curator and one of the creators of the FAD – Digital Art Festival – that happens in Belo Horizonte since 2007.

Patricia Moran is Professor and researcher of the upper reaches of the Audiovisual (School of communications and arts/ECA) and of course Design (Faculty of architecture and Urbanism/FAU) University of São Paulo (USP). Guides on postgraduate studies in media and Audiovisual Processes, ECA-USP. Director of CINUSP Paulo Emílio. Integrates the analysis and critical Audiovisual lab (LAY) the ECA/USP.

Pontofrio
From the concept "innovation" Pontofrio wants to be recognized as a consumer meeting point with the technology best suited to your need. With a tradition of more than 60 years, the electronics retailer and mobile network encourages social projects aligned with the principle that innovation is not a privilege of a few, but something that brings people together, that updates and connects to the new times. The support is performed through the Foundation Via Retail, responsible for investments Via Retail (company that administers Pontofrio marks and Casas Bahia) in actions that encourage and promote Brazilian culture, the social and human development and quality of life. www.viavarejo.com.br/fundacaoviavarejo