Altogether 38 artists participate in the innovative edition, in exclusive shows shown via internet and also in person, no sistema drive-in, on screens.

One of the biggest victims of the new coronavirus pandemic was the world of music shows. Several important events had to be canceled or even postponed, and still no new confirmed dates. Therefore, it is encouraging to know that 61st edition of Festival BB Seguros de Blues e Jazz will be held from 26 September to 14 November.

To make this possible, several adaptations were necessary. Given that the artists are from various regions of Brazil and abroad, the shows are being previously recorded, but with great care to preserve the hot and intense atmosphere of the live performances. Each presentation is being recorded especially for this occasion, in different locations and scenarios (studios, houses two musicians etc) and following all safety and health recommendations.

As a way to make the experience even more pleasant, a presenter will show in between interviews with the artists, where they reveal curiosities about their careers and the shows. There will also be live interaction with Internet users.

In the first five cities we will have the simultaneous exhibition of the Festival on Drive, according to step: Curitiba, Belo Horizonte, São Paulo, Brasilia and Porto Alegre. The shows will be shown on a big screen and the free tickets may be reserved by the public at a link to be released during the week of each presentation. Health and safety requirements will also be strictly followed, so that people, inside your cars, can enjoy the shows in complete safety and comfort.

The closing of the project will be a special edition celebrating the city of Recife, with three new shows and public participation, who will choose the 4 favorite shows among those broadcast in previous cities to be able to enjoy again!

For the children, the group was cast Story time, that will take care of the “storytelling”. Every sunday, new content for kids.

Since its inception, in 2015, BB Festival of Blues and Jazz Insurance exceeded 500 thousand people in terms of audience, having become the most comprehensive Brazilian event dedicated to jazz and blues, reaching eight capitals from different regions of the country.

The project is carried out via the Cultural Incentive Law sponsored by BB Seguros and carried out by Marolo Produções and the Ministry of Tourism, Federal Government / Beloved homeland. 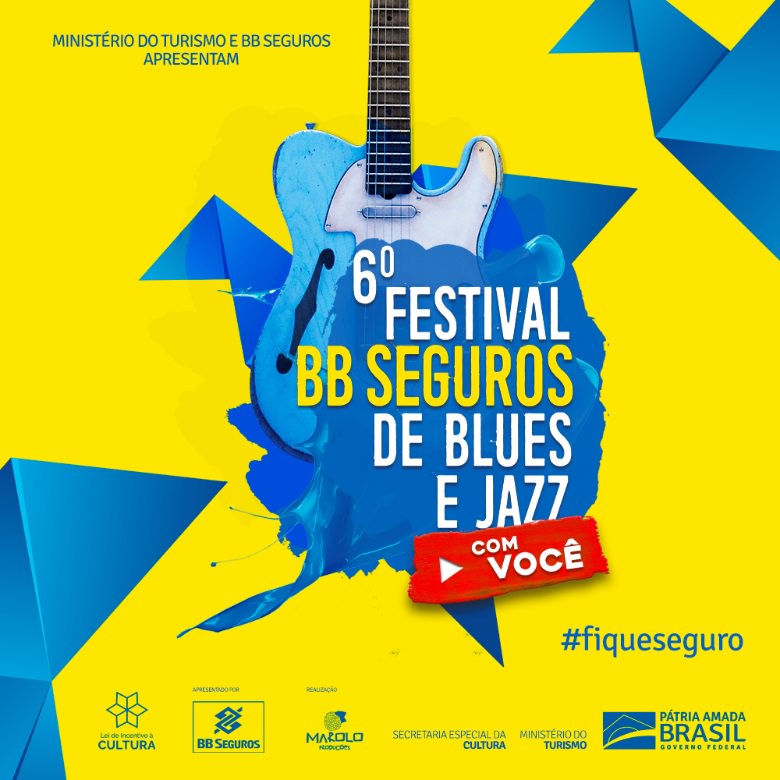 6ª Edition of the BB Seguros Festival of Blues and Jazz. Disclosure.

BB Seguros is the brand that represents the insurance business, foresight, capitalization and dental plans of the Banco do Brasil. BB Seguros is proud to be one of the companies that invest the most in tomorrow, both stimulating the financial planning of Brazilians and supporting cultural and sports projects. Its sponsorships aim to bring attractions to all regions of the country with free events in public places or at popular prices. This strategy has already 2 millions of Brazilians had more access to culture only in recent years.

Marolo Produções was born from the dream of bringing culture to the small town of Três Pontas, south of Minas, and held on 2009 his first project the Music of the World Festival, today in the 7th edition. Since then, Marolo brings culture to the whole country, without ever losing its origins. Maintaining the office in Três Pontas and the headquarters in São Paulo, holds cultural events in 5 Brazilian regions.

Previous: Even closed and not expected to reopen, Rio Art Museum presents two unpublished exhibitions
Next: Lya Galavote's next book is based on real history