Home / Highlights / Chloé Calmon to give a lecture on overcoming 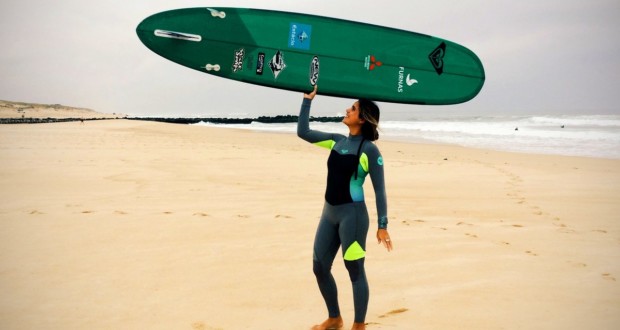 Onthe day 5 de Mayo, a partir the 18h, Instagram's campus Estacio Campos Grande – @ estacio.cg – (West Zone of Rio de Janeiro) - will broadcast a motivational lecture with one of the greatest athletes of Brazilian surfing, Chloe Calmon. The surfer will talk about overcoming challenges, highlighting her trajectory in sport and how she reconciles her routine with her professional life, showing how discipline, motivation and focus help your career. In addition to the dedication on the waves, Chloé is also studying digital administration at Estácio and is one of the presenters of the OFF channel, Globosat. Currently, is gold medalist at the Pan American Games in Lima 2019 and the second best longboarder the world by the WSL ranking (World Surf League) and in the last five years it was among the top five in the world championship of the category. In addition to thousands of Estácio students, the external public will also be able to follow the event, which is completely free.

- My current goal is to be a world surfing champion and bring this unprecedented title to Brazil, but having the power to positively influence people to follow their dreams and have a healthy lifestyle is what motivates me every day to overcome my limits and be a better athlete and person - highlights Chloé. The sportswoman is part of the Estácio team, a true Brazilian team with more than 400 athletes supported by the institution.

Support for sport is one of the pillars of the Educar para Transformar social responsibility program. Most of the group supported by Estácio are athletes at the beginning of their careers., many from underprivileged communities, and others that are already Brazilian promises in their respective modalities. Estácio also supports institutions related to sports, such as the Brazilian Confederation of Water Sports, the Brazilian Olympic Institute, the Fernanda Keller Institute, the Reaction Institute, of ex-judoka Flavio Canto, the soccer school of playmaker Zico, among others.

Estácio is one of the largest and most respected institutions in the Brazilian educational sector. There are 50 years provides access to quality education on a large scale and in a unique way. The institution is today one of the biggest supporters of sport in the country, with the Estácio no Esporte program. Currently, more than 500 athletes and athletes are supported through scholarships.

The program promotes some of the main sporting events in Brazil, in addition to maintaining partnerships with various NGOs and sports institutions. The Institution, which is also a signatory to the Pact for Sport, has athletes like Chloé Calmon (surf), Laís Souza (former gymnastics athlete), Daniele Hypólito (fitness), Fernanda Keller (triathlete).

Present at the Rio Games 2016, Estácio was the first supportive Olympic educational institution, being the provider of services for the selection and training of 140 thousand volunteers and 6000 Rio Olympic and Paralympic Games employees 2016. Still 2016, the company won the Aberje Nacional Award in the Program Communication category, Sports Projects and Actions with the case “Estácio no Esporte - Forming Champions”. The case showed the institution's strong and broad connection with sport over the years and during the Olympic Games

Previous: What is 3D coating and how to use it in your home?
Next: Documentary AMAZON IN FLAMES