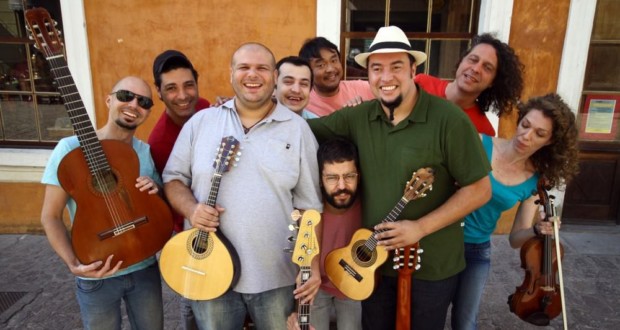 The Rope-based Orchestra presents repertoire composed of works of composers linked to the music scene of Curitiba, This Friday (07) it is Saturday (08), in the chapel Santa Maria. The first generations of composers are represented by authors such as Benedict Mossurunga, Benedict Nicholas dos Santos and José da Cruz. More recent generations, Janguito works of the Rosary, Father Penalva, Wilson Moreira, as well as compositions by musicians of the Orchestra itself.

In his last performances, the Rope-based Orchestra was alongside renowned singers and national groups as Diogo Nogueira, Lenin, Steak Muderno, among others. For these concerts, the copyright of songs and songwriters group members are in the programme curitibanos. "The Orchestra has copyright character. Virtually all our musicians make up. This year I wanted to go beyond his own compositions of the Group and pay homage to other composers who built your way of the history of the city ", says conductor John Egashira.

The maestro – John Egashira is dedicated mainly to research and performance in brazilian music, having conducted several projects, many of them in collaboration with artists such as Roberto Corrêa, Paula Santoro, André Abujamra, Consuelo de Paula, Nicolas Krassik, among others. Directs the Orchestra of String-based Curitiba since 2001, Group with which has performed alongside names like Paulinho da Viola, Dominguinhos, Zeca Baleiro and Renato Borghetti.

Master's degree in music from UFPR and served as professor in institutions such as PUC-PR and Conservatory of MUSIC of Curitiba. Also taught classes at festivals of Antonina, Londrina and in Curitiba music workshop.

The Orchestra – The Rope-based Orchestra was created by Roberto Gnattali in 1998. Dedicated to research and dissemination of brazilian music, the Orchestra has odd instrumental formation with violin, mandolin, ukulele, Viola caipira, violão, violão 7 strings, piano and percussion, What gives the very particular sounding group. His repertoire search cover various periods in the history of brazilian popular music and includes compositions by its members. The arrangements are especially developed by musicians of the Orchestra and by names like Paulo Bellinati, Maurício Carrilho, Leandro Braga, Dante Ozzetti, Jayme Vignoli, Mario Manga, André Abujamra, Paulo Aragão and Davoud Ram.

The Orchestra has had as guests Monica Salmaso, Roberto Corrêa, Ceumar, Pedro Amorim, Dominguinhos, Joel Nascimento, Andréa Ernest Days, Caíto Marcondes, Maurício Carrilho, Zé Renato, Ná Ozzetti, Renato Borghetti, André Abujamra, Carlos Malta and Dimos Goudarolis. Among his most important presentations are those carried out in the workshops of Music of Curitiba (2001 to 2016), in the 8th Festival Brazil Instrumental of Tatuí and wake up Brazil in Porto Alegre. In 2008 released your first CD, titled Antiqüera, beside the guitar player Roberto Correa, having been nominated for the award a Rival.

Previous: Children's books show the charm of the beautiful stories
Next: Abstract workshop: A watercolor on canvas in the BUT-SP

The Return of the Contemporary Collective

"Even on sunny days, there are the diehards who insist on seeing only their own shadows." Arthur Helps