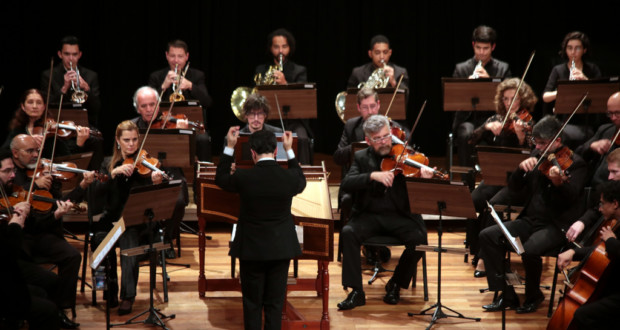 Chamber Orchestra of the city of Curitiba. Photo: Doreen Marques.

French songs and dances of the Baroque period should carry the Chapel Santa Maria for another century on Friday and Saturday. The Chamber Orchestra of the city of Curitiba with the musical direction of Fernando Cordella, runs the program 'Le Roi Danse' with compositions made to the court of King Louis XIII and Louis XIV.

Full concert original dances of the time, with choreography developed by São Paulo specialist in Baroque dance, Raquel Spider. "To get here had enough research on original materials, notes and manuscripts of the time. A concert of this level is rare to have this in Brazil!”, says choreographer.

The repertoire includes works by Jean-Fery Rebel (1666-1747) e Jean-Baptiste Lully (Italy, 1632 – France, 1687). "This is a program that runs a few times in Brazil, mainly done by a modern orchestra. It's very special part of it ", complete artistic director, Fernando Cordella.

Fernando Cordella is considered one of the main harpsichordists of his generation in Latin America. In 2015 has received, in São Paulo, JCI TOYP Brazil the prize as the most significant figure in Brazil the year, in the "Cultural Success".

In 2016, He took full professor office and coordinator of Baroque Music Workshop of the School of Music of São Paulo - EMMSP, linked to the Municipal Theater of São Paulo. It has strongly acted as soloist and guest conductor in major orchestras in Brazil. Cordella is also artistic director and principal conductor of the Symphony Orchestra of Carazinho and Bach Society Porto Alegre.

Previous: Art to connect and build a less segregated world
Next: The Sacred Art Museum of Sao Paulo promotes Course in Loco: Jundiaí