Home / Art / Conversation between Marcelo Silveira, Gabriela Motta and the audience is this Wednesday (18) no V744atelier 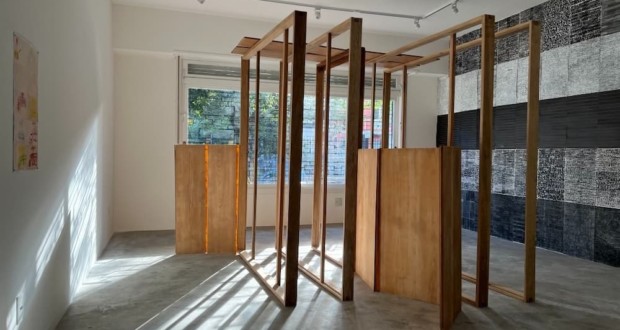 Exponent of the plastic arts, the artist from Pernambuco proposes new dialogues to art in the exhibition “C+asa”, on display in the capital of Rio Grande do Sul

Marcelo Silveira conducts exchanges with the public in the V744atelier, in this on wednesday (18), to 16h, in a conversation mediated by critics and researcher in visual arts, Gabriela Motta. The plastic artist from Pernambuco will talk about his creative process and his latest production, the exhibition C + so, on display in the capital of Rio Grande do Sul.

C+wing is a intervention no V744atelier. Some of the works were produced during the residency period, who performed in space. in this residence, his investigations focused on establishing approximations between fiction and reality; the memory of space, of the guests and mine, details. – The result of this action was an ongoing dialogue, open and rich in doubt, comments. For him, interest, mainly, think about the occupation of institutional and non-institutional spaces, private and public space. Without forgetting the relationship between the work and spectators.

C+asa intends to establish a conversation between Marcelo Silveira's five points of interest. The first point is Vilma Sonaglio's house, from where you used materials originating from the home, which was built in 1962, artist's birth year; the second, to Leno's house – from Heleno's drawings (1987), child who accompanied, for two years, in activities related to art-education and coexistence carried out in his studio, in Gravatá-PE, city 80 kilometers from Recife; the third is Home Clothes (2002/2003), held in Cachoeirinha-PE, with goat leather and steel, having as reference the occupation of the landless along the federal roads and the covers that are used to “protection” of home appliances; the fourth point is the Invented House, from his contact with the work of the writer from Rio Grande do Sul, Lya Luft, and the fifth point is The House Drawing, series of works developed from materials from the extinct Casa do Desenho, from Porto Alegre. “Ata” and “Lições Modernas” are two works that are part of the project, both were produced with lyrics tone and Letraset, respectively.

Silveira considers the invitation to exhibit at the V744atelier a challenge. – It is about walking through the territory of uncertainties; to continue a conversation started with Vilma in 1985, during the Winter Festival of the Federal University of Minas Gerais, in Diamantina, and also to rediscover the city and the friends that I like and were fundamental in my formation, the firm. 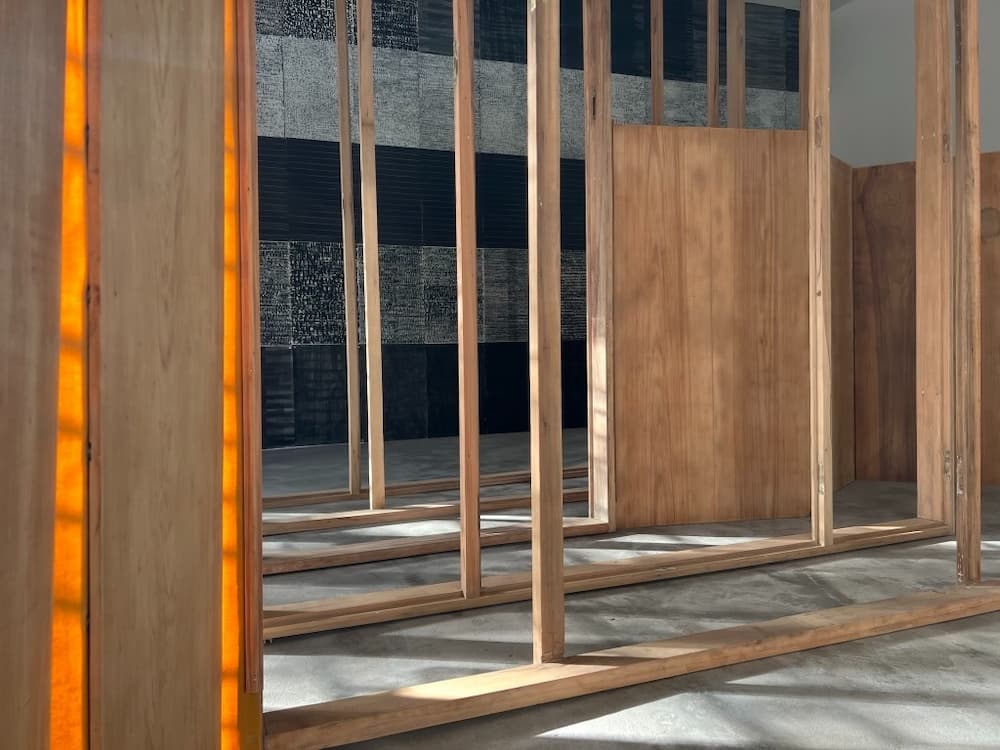 Installation produced from materials not used in the renovation of the Atelier. Photo: Vilma Rattle. 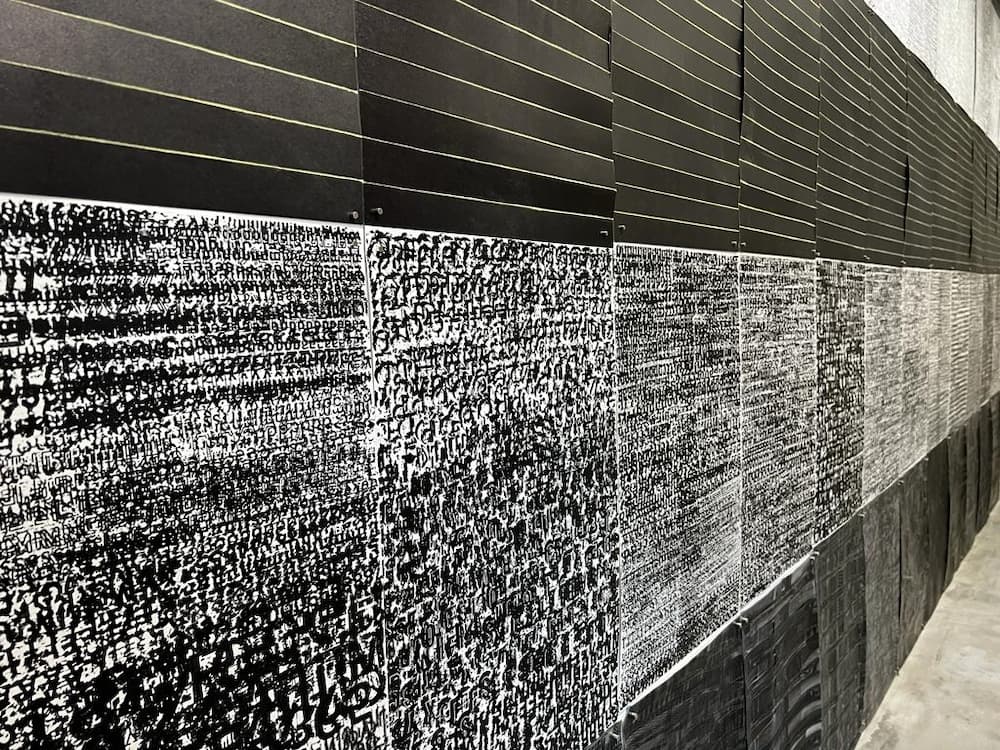 From the years 1980, Marcelo Silveira stands out for his constant interest in exploring the physical characteristics of the materials he works with, investigating and revealing the possibilities of manipulation and meaning of each of them. So, makes use of different materials – wood, leather, paper, aluminum, iron, glass – often combined with each other. This trait is maintained in the new exhibition. – Often, I am provoked by the symbolic charge of the materials. Transparency, fragility, malleability, coloring, temperature or the possibility of ceasing to exist, signal the time of approach, collect, selection and reflection in exhibition spaces, points.

Thus, it is possible to infer that it is established, in the artist's work, a game between production and appropriation. – I understand production as bringing together and associating an infinity of possibilities; among them the appropriation, highlights Silveira.

An example of this can be seen in the exhibition “Madeira de Lei, Lawless Wood”, project in development, in which the artist reflects on the rational use of wood; on the disposal of material in urban areas. The wood, as it has always been classified as law, loses the law when discarded.

Also relevant in Marcelo Silveira's trajectory is his role as an art educator, fact that is indelibly reflected in his artistic activity. – My practice as an educator, and often, confused with that of an artist, notes. he remembers that, twice, participated in the Porto Alegre Winter Festival, having, on your second visit, given a workshop on the Ilha da Pintada. – Thinking about knowledge construction processes, from an artistic practice, interests me a lot, find.

He still remembers that, in 2004, carried out an intervention in the Torreão. The work consisted of building a goat leather mesh reproducing the dimensions of the space; then it was presented at the Usina do Gasómetro, in Recife (Mom), João Pessoa (San Francisco Cultural Center), Belo Horizonte (Guinard School) and São Paulo (Galeria Nara Roesler). The work was destroyed in a fire in March/2021. In 2005, participated in the 5th Mercosul Biennial with a commissioned work. “Everything or nothing” resulted from research on the “warehouse aesthetics”; the work, today, integrates the MAC-USP collection. – The exchanges established in Porto Alegre were very rich. There were two productive experiences, enriching, many developments took place, emphasizes.

Concurrent with your presence at the V744atelier, in Porto Alegre, Silveira has two exhibitions on display. In Recife, presents works resulting from the discard of urban architecture, e em New York, a series of works that have been produced since the 1990s. 90, from a survey with the cajacatinga, a wood collected in the countryside. Both shows were named after “Hotel Solitude”, for putting together a set of collages, that integrated the different spaces. These works speak of the difficulty of starting a creative process, because it is necessary to convince the other that this is the path to be taken.

Marcelo Luiz Silveira de Melo (Gravatá-PE, 1962) is a sculptor and, since the years 1980, stands out for its continuous interest in exploring the physical characteristics of the materials with which it works, investigating and revealing the possibilities of manipulation and meaning of each of them. Participated in the 1st International Biennial of Buenos Aires, Argentina (2000); of the 5th Mercosur Biennial, in Porto Alegre, Brasil (2005); the 4th Bienal de Valencia, Spain (2007), and the Bienal de São Paulo (2010). His works are part of important institutional collections, such as the Museum of Modern Art in Rio de Janeiro.

Conceived by visual artist Vilma Sonaglio, the V744atelier is a place to create, expose, promote and enjoy contemporary art. Hosts exhibitions by guest artists, but also accepts proposals from creators who are developing their research and production in all languages ​​in contemporary art. Inaugurated in 18 September 2021, with the exhibition “The other way around…may not be what it is”, de Rattle, the atelier has already hosted the exhibition “Landscape without Return”, by André Venzon and Igor Sperotto (19/12/21 to 25/02/22) and “Beabá”, by Maria Paula Recena and Marcos Sari (12/03/22 to 28/04/22). “C+asa” is the fourth show in the exhibition space.

Access and enjoy the communication channels of the V744atelier:

Countryside: Conversation about the creative process of the exhibition “C+asa”, by the plastic artist Marcelo Silveira with mediation by the critic and researcher Gabriela Motta.

Visitors until 22 th July 2022, from wednesdays to fridays, from 14h to 17h. Other times will be scheduled by the direct do Instagram V744atelier.

The use of a mask and alcohol gel is recommended..

How much: Free entry

Previous: Theatro Municipal de São Paulo carries out a project that takes free performances to the city's neighborhoods
Next: See how to work with flowers in decoration