Highlight for the Lives of French chef Frédéric Monnier, on Friday, 17 at 7pm and Chansong in honor of Tom Jobim and Michel Legrand, on Saturday, 18 with the unpublished show by Valerie Lu's musical quartet, Lucynha Lima, Kiko Continentino, Marcello Ferreira and the participation of Wendel Silva. To celebrate French heritage, two special podcast episodes from the Afluencia channel and a tribute to French literature, through reading the classic Fables of La Fontaine

Every year in September the European Heritage Days (European Heritage Days) in France and Europe. To celebrate this date, to French Rio de Janeiro Alliance prepares a special program to share the Franco-Brazilian heritage throughout the month of September. Usually identified with castles, museums, churches, archaeological sites, among others, heritage has much more to offer besides buildings and monuments, being also represented by the literature, artistic expressions, musicals and even for the gastronomy.

On Friday, 17/9, at 19h, live will be a tribute to French cuisine, with the Chef Frédéric Monnier, presented by the actress Julianne Trevisol. Listed as a World Heritage Site, gastronomy is a pride for France, a sum of techniques, of products and living traditions. Streamed from the Alliance Française bistro, they will share typical French bistro recipes that are easy to make at home. One of the recipes that chef Frédéric Monnier will present is the Beef fillet with sautéed batata pepper (Filé mignon ao pepper and sautéed batata). The live will be broadcast directly from the Bistro da Aliança Francesa, in Botafogo and just to participate Access: youtu.be/RcKRzOsz-Eg.

already in the Saturday, 18/9, also at 7pm, the presentation of the Live Chansong – tribute to Tom Jobim and Michel Legrand with an unprecedented show, idealized by the quartet Valerie Lu (Voice), Lucynha Lima (Voice), Kiko Continentino (Piano) and Marcello Ferreira (Guitar), and with participation of Wendel Silva (Drums and Percussion). The idea came from Valerie Lu and Kiko Continentino, both great admirers of the two composers for their brilliant works, originals, creative, sophisticated, light and poetic at the same time. four voices, piano, guitar and percussion interpret the songs in French and Portuguese, with own arrangements. The show walks through the fantastic works of these two geniuses of universal music, a brazilian and a french, representing the musical heritage of both countries. To participate in Chansong, go to: youtu.be/9pV75JPWGco.

French heritage will also be celebrated through two special episodes of the podcasts of the Afluency channel (www.rioaliancafrancesa.com.br/afluencia). In the new episode of Places called, we will get to know the history of the slab of Parc aux Lièvres de Évry, housing development in the Paris region. Already in Interlining, podcast dedicated to reading books in French, a tribute to the French literary heritage will be paid with the reading of the classics Fábulas de La Fontaine.

Since 1984, the French calendar has a special day to celebrate all the richness of its heritage, and 1991 this day was also celebrated by the European Union, dando origem às European Heritage Days (European Heritage Days). With the involvement of more than 50 countries, the event aims to raise citizens' awareness of Europe's cultural richness and diversity, as well as for the preservation of your heritage.

About the live at the Alliance Française bistro in Botafogo, chef Frédéric Monnier and actress Julianne Trevisol invite the public to make it at home, o Filé mignon ao sautéed batata pepper. Check out the information about the Chef and write down the recipe!

Formed, since childhood, with the purest tradition of French gastronomy, Frédéric Monnier desenvolveu, obstinately, the qualities that enabled him to achieve the excellence enshrined in the title of Maître Cuisinier de France in 2013. Worried about transmitting this savoir-faire that he admires so much, dedicates a large part of his time in the training of gastronomy professionals as Chef Ambassador of Senac. Engaged in a responsible and sustainable kitchen, the Chef actively participates in agroecological actions and has been developing 10 years a healthy and balanced diet for students at Lycée Moliére in Rio de Janeiro. 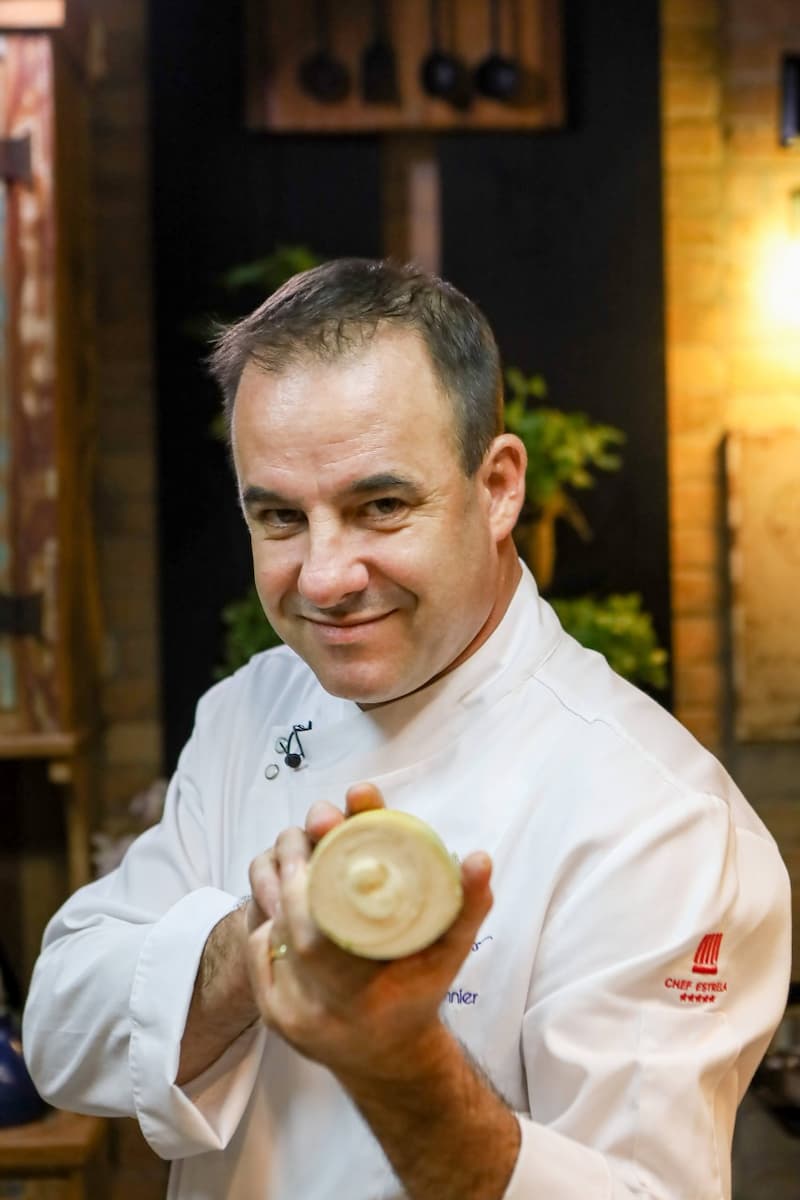 Here is one of the recipes that the chef will present at the live:

About live Chansong – Homage to Tom Jobim and Michel Legrand with an unprecedented show by the musicians:

born in Montmartre, Paris city postcard,Valerie Lu, former international swimmer of the French national team (Valerie Pedeboy).Singer songwriter with 2 CDs released one in France (Brazil Confidential) It's in Brazil (Saudade my love) released by the Sony music label that becomes a soundtrack for the soap opera « Time does not stop » with the participation of the singer Mart’tinalia.

Kiko Continentino, pianist, composer and music director. Recognized in the instrumental environment and in MPB.

He worked with artists such as Milton Nascimento and Djavan and is now part of the Azymuth group. It has nine copyrighted discs.

Born in Belo Horizonte, Marcello Ferreira built much of his career in France. Acting as musician author/composer and music producer launches 3 CDs by Sony Music Records (Brazil Nights) (Beauty) and (1little mouthful). His wanderings yielded a song recorded by Flora Purim: the song “Colo de Rio”, which became a track on one of the albums by iconic American trumpeter Dizzy Gillespie.

Multi-instrumentalist and music teacher, has been developing a very playful and artistic career. Born in São Gonçalo/RJ, plays drums, percussion, violão, guitar and keyboard, also dedicating himself to the confection, assembly, repair and recycling of instruments. Parallel develops the “Catarina Play”, a multimedia art and culture project for all residents of this location. 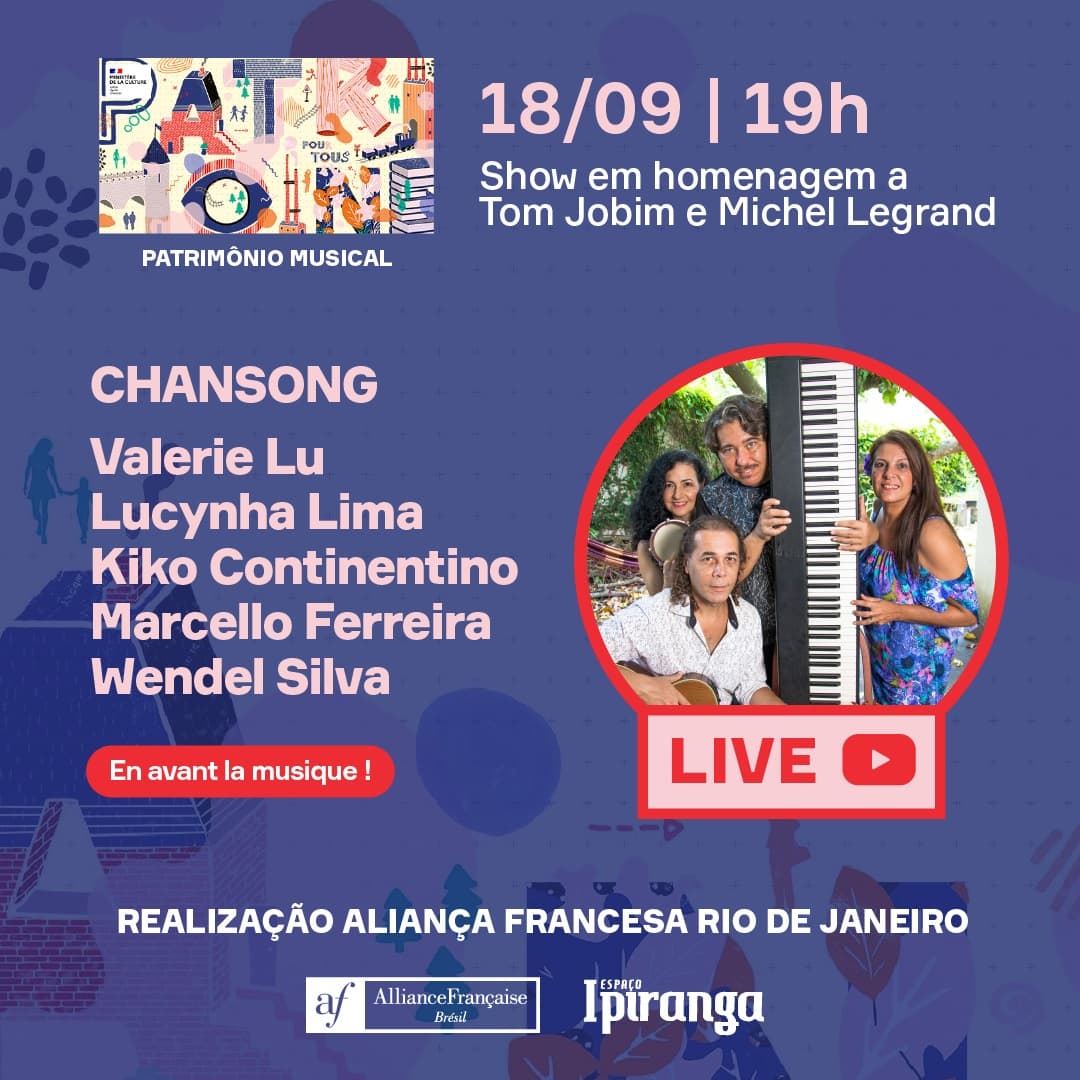 What could the buildings around us tell us if they could speak? Neste novo episódio of Localities, we will visit the slab of Parc aux Lièvres de Évry.

This year will be the last. Considered as an architectural error, the slab of Evry's Parc aux Lièvres should have been destroyed. Who knows, really, the story of this huge cement slab with its towers, that hang over the city? In this episode, she tells her construction, in the years 70, to remedy the housing crisis, but also how is life in a small town and the sadness of its inhabitants that leave her with a lot of grief.

Available on major platforms at 21 of September or through the website www.rioaliancafrancesa.com.br/afluencia/#lieuxdits

Entrelinhas is a program dedicated to literature lovers. Here, you will be able to discover or rediscover great classics of French and Francophone literature and contemporary productions by Brazilian authors translated into French and, also, by French-speaking authors translated into Portuguese. The series will feature exclusive readings of audiobooks recorded by the teams of the French Alliances network in Brazil. In September, the new podcast episode will be a tribute to French literary heritage with the reading of the classic Fables of La Fontaine. A read for young people and adults! Available on major platforms at 28 of September or through the website www.rioaliancafrancesa.com.br/afluencia

Completing 136 years of activities in Brazil, the French Alliance is a reference in the language and, no doubt, the best-known institution in the world, when it comes to the spread of the French language and Francophone cultures. Has, currently, more than 830 units 132 countries, where they study about 500.000 students. In France, it has schools and cultural centers for foreign students. Brazil has the world's largest network of French Alliances with 37 associations and 68 units.

Previous: National feature ‘The Massachusetts Birds’ debut on Amazon Prime
Next: planned rooms: why opt for them in apartments?