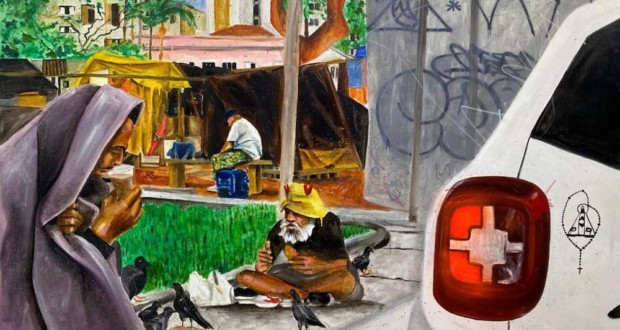 …also about what affects us

At first sight, Father Júlio Lancellotti and the graffiti artist Enivo may seem distant figures. They are not. Enivo, deep admirer of the priest, started to follow his performance more and more closely to create the canvases that make up the exhibition “AFFECTION”, new show of Museu de Arte Sacra de São Paulo – BUT/SP, institution of Department of Culture and Economy of the State of São Paulo Creative, under the curatorship of Simon watson.

The 17 The paintings have as their theme the humble populations that live on the sidewalks, São Paulo squatters and shelters. “Affection is about affective bonds but also about what affect“, explains the artist, citing charitable actions and the priest's engagement in the fight against aparophobia – hostility towards homeless people (and against poor people in general) that manifests itself through actions of the public and private power. Some of the screens reproduce scenes of Lancelotti offering food and water., caring for children and talking to the homeless; others are portraits of the residents themselves, in a narrative that alternates dismay and hope.

for ambiance, Enivo was invited to draw scenes of the city directly on the walls of the museum, in a kind of contemporary fresco. On top of these charcoal drawings, oversized, oil and spray canvases will be hung. “The expography we imagine is directly related to his method of working on the streets: when he sees a bare wall, he starts by making a preparatory sketch which he then superimposes making the image more and more apparent”, explains Simon watson, “Unlike your work on the streets, here at the museum, the final touch is to place ready-made canvases on the museum's walls.” 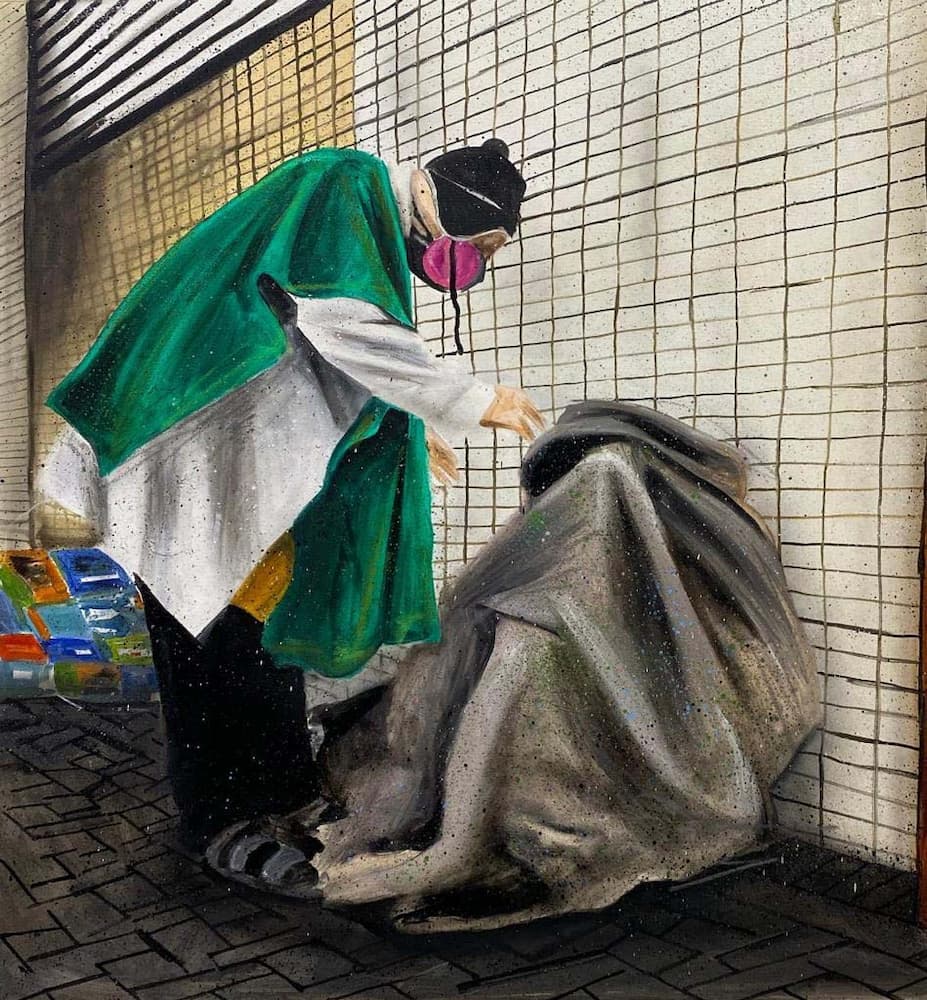 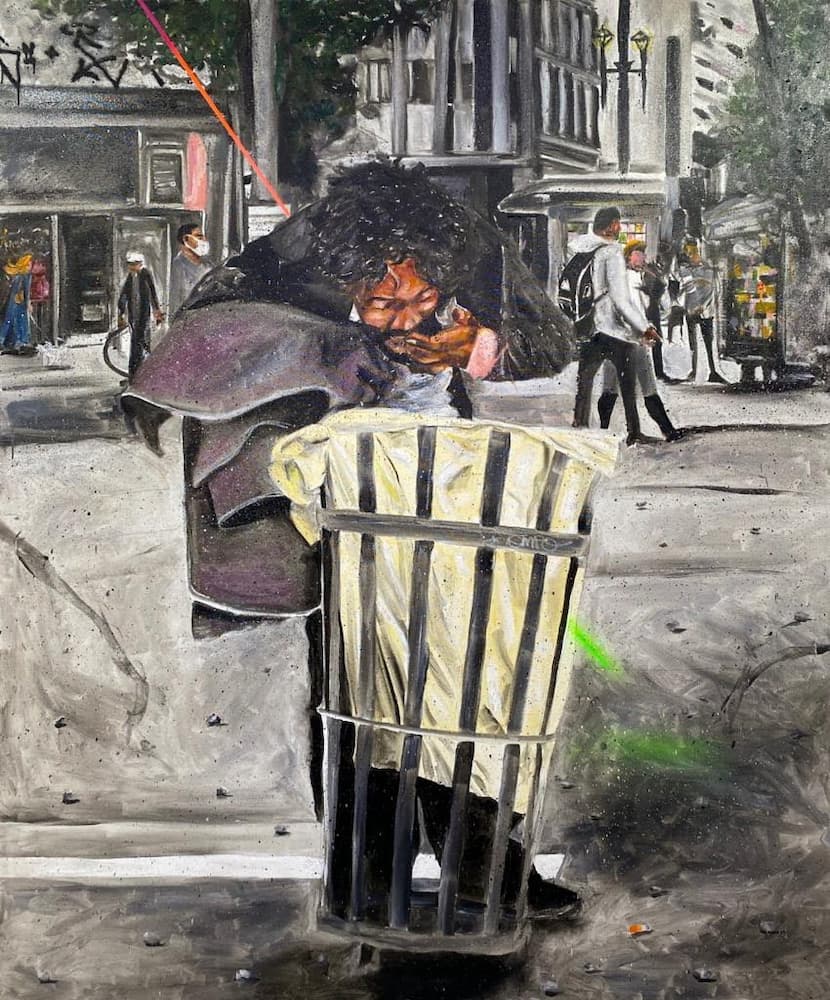 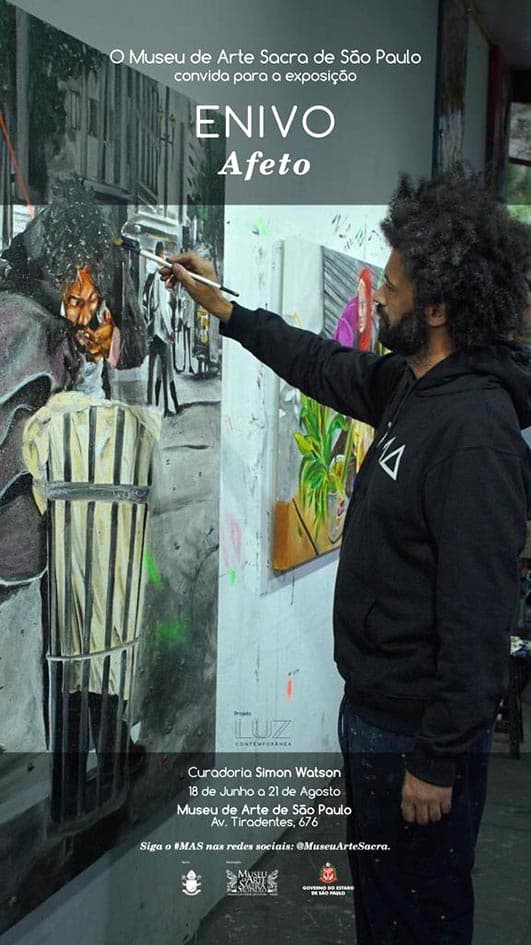 Follower of Father Júlio Lancelotti on social media, Enivo found himself increasingly moved by his daily denunciation of the precarious conditions of life on the street and motivated by his posture and engagement. First, approached the photographers accompanying him – Daniel Kfouri, Lukas Juhler and Victor Angelo – and, slowly, started to accompany some actions in the parish of São Miguel Arcanjo, in the neighborhood of Mooca. For the artist, Father Lancellotti acts as a link between the street and the institution, be it the church or the museum. “He's time confronting a lot of people, of organs, denouncing situations, being threatened. It's the graffiti artist's role too”, compare Enivo.

Another important parallel is made by the curator when comparing the artist’s contemporary and multicolored works with some pieces in the museum’s permanent collection., especially with some oratories from the 18th and 19th centuries “Pieces such as the Santa Isabel Oratory, made by Benedito Amro de Oliveira (1848-1923) clearly bring the hand of popular painters and artists, freehand paintings of a world of trees and flowers, hills and houses”, suggests Simon watson, who does not hesitate to recover the inventive spirit present in the two productions.

Contemporary LIGHT is a program of contemporary art exhibitions that unfolds into diverse cultural events and actions, public and private. Developed by the curator Simon watson, the project, currently, is based at the Museum of Sacred Art of São Paulo. in this space, Contemporary LIGHT features themed exhibitions by guest artists, in order to establish conceptual and material dialogues with works from the institution's historical collection. Although strongly focused on the current Brazilian art scene, Contemporary LIGHT is committed to a variety of practices., cultivating partnerships with performing artists and organizations that produce art events.

MASK USE IS RECOMMENDED

Marcos Ramos, AKA Enivo, is a street muralist who also started to embrace an active studio practice. Born in 1986, started his artistic career at 12 years doing graffiti in the Grajaú neighborhood, in São Paulo. He has painted murals all over Brazil, as well as in the United States, Mexico, Germany, Holland, France, Áustria, Spain, Chile and Argentina. Participated in the “Stroke Art Fair” Festivals in Munich; Urban Festival “City Leaks” in Köln, Germany; “CALLE LIBRE” at the University of Fine Arts Vienna; and Wynwood Art District-Miami and has collaborated on campaigns for major brands such as NIKE, Adidas, Samsung, Bradesco, Nature from Ellus. For ten years he worked with arts education in schools and NGOs, focused on knowledge sharing, training and sensitization of hundreds of young people from the periphery. Recognizing that Brazil lacked cultural spaces to host and market urban art, together with a group of like-minded artists, he founded the A7MA Gallery, in Vila Madalena, where he has been curator of more than 70 exhibitions. Enivo's works participated in several exhibitions, individual and collective, in galleries and institutions, as in the Pinacoteca do Estado de São Paulo and the Museum of Sacred Art of São Paulo.

Born in Canada and raised between England and the United States, Simon watson is an independent curator and specialist in cultural events based in New York and São Paulo. A veteran with thirty-five years of experience in the cultural scene on three continents, Watson conceived and curated more than 250 art exhibitions for galleries and museums, and coordinated consulting programs in art collection for numerous institutional and private clients. in the last three decades, Watson worked with emerging and unrecognized artists, bringing them to the attention of new audiences. Her area of ​​curatorial expertise is identifying visual artists with exceptional potential, many of which are now internationally recognized in the blue-chip category and are represented by some of the most famous and respected galleries in the world..

The Museu de Arte Sacra de São Paulo, institution of the Department of Culture and Economy of the State of São Paulo Creative, It is one of the most important of its kind in the country. It is the result of an agreement signed between the State Government and Mitra Archdiocese of Sao Paulo, in 28 October 1969, and its installation date 29 June 1970. Since then, the Museu de Arte Sacra de São Paulo He came to occupy wing of the Monastery of Our Lady of the Immaculate Conception of Light, on Avenida Tiradentes, downtown São Paulo. The building is one of the most important monuments of colonial architecture São Paulo, built of rammed earth, rare remaining example in the city, last farm convent city. It was listed by the Historical and Artistic Heritage Institute National, in 1943, and the Council for the Defense of Heritage, Architectural artistic and the State of São Paulo, in 1979. It has much of its collection also listed by IPHAN, since 1969, whose priceless heritage includes relics of stories in Brazil and worldwide. The Museu de Arte Sacra de São Paulo holds a vast collection of works created between the 16th and 20th centuries, counting with rare specimens and significant. There are more than 10 thousand items in the collection. Has works of recognized names, as Frei Agostinho da Piedade, Frei Agostinho de Jesus, Antonio Francisco Lisboa, the "Aleijadinho" and Benedito Calixto de Jesus, Among many, anonymous or not. Noteworthy are also the collections of nativity scenes, silverware and jewelery, Lampadarios, furniture, altarpieces, altars, clothing, liturgical books and numismatic.