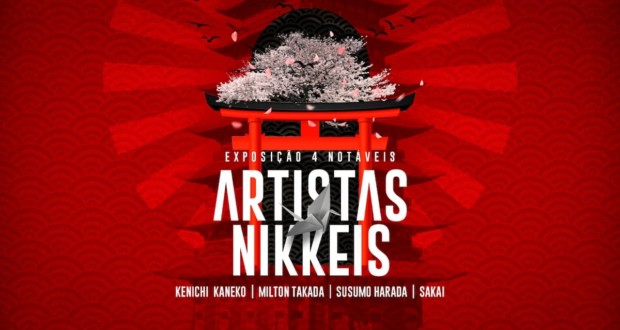 Embu das Artes will host the group exhibition “4 Notable Nikkei Artists” with works by Ken Kaneko, Milton Takada, Susumo Harada and the late Master Sakai from the day 17/06, at the Cultural Center of Assisi Master Embu, curated by Paulo Dud and organized by the Municipal Secretary of Culture of the Embu das Artes City Hall.

The exhibition takes place in the year in which the 114 years of Japanese immigration in Brazil and the initiative to project the culture of Japan is already a tradition in the city, such as the annual event of the “Japanese Culture Week” and like other exhibitions previously occurred as the “Nikkei Art & Craft”.

The word Nikkei defines people who are Japanese immigrants or descendants and, in Brazil, where the presence of the Japanese colony is great and its culture was widely spread, there are countless Nikkei who excel in different areas and, a lot of them, are recognized in the plastic arts at national and international level.

Ken Kaneko – is 87 years old, is an actor and artist. Born in Yokohama, in Japan, and migrated to Brazil in the years 60. as a painter, participated in the 7th and 9th Bienal de Artes de São Paulo and in art salons such as Bunkyo. Kaneko also featured at the Nikkei Art Exhibition & Craft of Embu das Artes. As an actor, worked in commercials, television soap operas and in several cinema films, such as, “Gaijin – The Paths of Freedom”, “The Kiss of the Spider Woman” and “His Excellency, The candidate".

Milton Takada – musician and artist, graduated from the Faculty of Fine Arts of St. Paul, Takada has been painting for over 40 years and, since 1985, participates in salons throughout the interior and coast of São Paulo in individual and collective exhibitions. Received awards from the Secretary of State for Culture at the 1st and 2nd Salon of Plastic Arts in Greater São Paulo and the gold medal at the Bogainville Art Salon in Alphaville. In Embu das Artes, presented the show Pizzaria Brasil, among others.

Susumo Harada – is one of the greatest Japanese-Brazilian artists, mastering sculpture and painting in contemporary art techniques. But it is in engraving that he performs his art with mastery. He is also a dedicated researcher in the field of conceptual art., proposing installations that discourse around social issues. Descendant of Japanese parents, Harada was born in 1938, is based in Itapevi, where he worked for 12 years as a cultural agent of the Itapevi City Hall, and participated in art salons and several exhibitions. He is the author of books on the research of the “Path of Peabiru”, which is an ancient route that connected the Atlantic and Pacific oceans, crossing Brazil, Paraguay, Bolivia and Peru.

Mestre Sakai Tadakiyo Sakai was born in Nagasaki, in Japan, came to Brazil in 1928 and Embu das Artes in 1930, becoming one of the most important terracotta artists in the country. died at 67 years, in 1981, and left an important legacy for the municipality and for the national culture, being recognized alongside other great artists such as Tomie Ohtake, Master Vitalino and Antonio Poteiro. In Embu das Artes, Sakai has consolidated his career, while at the same time striving, incessantly, to make the city a reference for the arts. He was the creator of the Salon of Plastic Arts in Embu. His works are on display at the Sakai Memorial, opened in 2003, whose coordinator is his disciple and artist, Tonia of Embu, and where the population is also offered free ceramics courses and workshops. Sakai also helped to rescue and preserve the traditional Festa de Santa Cruz in the municipality.

Previous: armchairs: how to match them with the environment?
Next: Enivo - AFFECT