Concentration near the Copacabana Fort (in front of the Softel)

For the eighth year the block Ulalá Balancê go to the street in the parade marked for Saturday's carnival, 14, on Copacabana beach. The block theme this year brings together more reasons to celebrate the revelry: Samba celebrates 130 years of French Alliance in Brazil and 450 years of Rio de Janeiro. With concentration scheduled for 14h, close to Copacabana Fort, the Ulala Balance continue until Magellan's Figueredo Street where the parade ends at 18h. 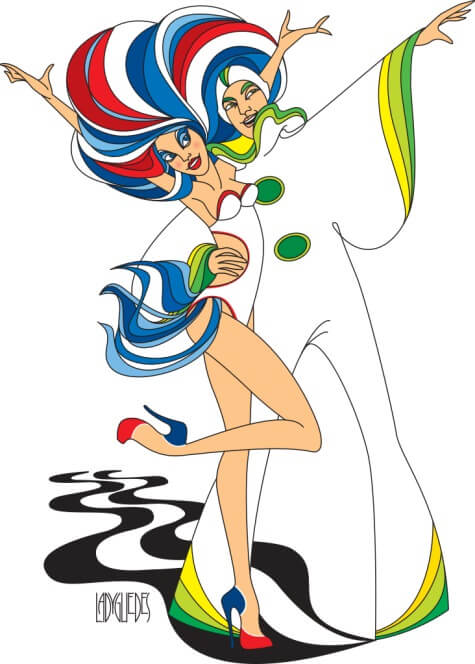 The first year of the parade was news in French newspapers and fell in love the local French community. Getting to attract today about 700 revelers, the block brings together students and teachers of the Alliance Française, do Liceu Molière, members of the embassy and trade France-Brazil Chamber, beyond the Rio lovers of French culture.

The official block shirt is signed by the illustrator Fernanda Guedes and has been chosen by voting on the Facebook page of the Alliance Française of Rio de Janeiro between three radio buttons. The magazine is free on the day of the parade on production of password that can be redeemed in the secretariats of the units throughout the city, with preference for students. The number of shirts is limited.

The idea of ​​creating a block appeared in 2007 when Esther Matuck, teacher of the institution there 29 years and one of the founders, with M. Christian Gerbauld suggested the general direction of the Alliance Française create something that would integrate more students, faculty and staff in a way that Brazil and France were close. Esther says that there was no better option to use the carnival as the necessary channel for it. “The Ulala Balancê grew out of an idea, a moment of relaxation in the cafeteria center branch. Students, teachers, fellow directors and revelers in general, celebrating the union of two cultures in a popular event as the carnival. The parade that reaches the eighth year as a great success”, celebrates.

Fernanda (Lady) Guedes is self-taught graphic artist. One of his best known works is the opening of the first seasons of Saia Justa Program, GNT, that portrayed the presenting Monica Waldvogel, Rita Lee, Marisa Orth, Fernanda Young and Marina Lima. Recently illustrated the Tour campaign at the French River Alliance Classes. His works have been exhibited and published in Brazil, USA, England, Spain, Australia and Japan. In 2014 he dedicated also to streetart.

With almost 130 years of international experience, the French Alliance is the only institution in Brazil recognized by the Embassy of France to conduct examinations for obtaining the DELF and DALF diplomas International, recognized by the French Ministry of National Education. The institution is also a center for the administration of tests to obtain diplomas and international certificates: TCF – The French Knowledge Test, with valid certificate for two years, TEF – French Assessment Test, with valid certificate for a year, and CAPES / CNPq - Level Personnel Training Coordination Superior / National Council for Scientific and Technological Development, also valid for one year. The French Alliance in Brazil develops partnerships with several French and Brazilian companies as well as being an essential actor Franco-Brazilian cultural dialogue.

AM FRANCE, AM follies, CONGRATULATIONS TO YOU

130 YEARS OF THEIR ALLIANCE TRIUMPHANT

EQUALITY CAN NOT MISS

TODAY IS THE DAY OF HAPPINESS

FRATERNITY I WILL YOU EMBRACE. (CHORUS)

TODAY I WILL FINISH ME