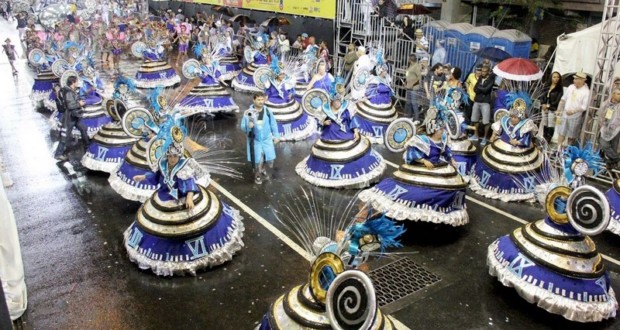 Blue Youth school was the champion of the Carnival 2015. Photo: Alice Rodrigues/FCC.

The Cultural Foundation of Curitiba published, This Tuesday (15), the notices of public call for the parades of the samba schools and the ranch of flowers during Carnival 2016, that will happen on the day 6 February, Marechal Deodoro Avenue, a partir the 17h. Proposals should be sent to 30 of december.

One of the news for the next year is the new nomenclature for the description of Groups. The former group came to be called the special group and Group B is replaced by the Grupo de Acesso. The total amount available has also increased. In total, for the parades, were reserved R$ 394,2 thousand. In 2015 the value of R$ 339 1000 and, in 2014, of R$ 263 thousand.

The last placed of the special group will be automatically downgraded to the access group. Ever the champion of the Grupo de Acesso guaranteed the right to parade in the Special Group 2017. The order of schools and blocks in the parade will be set by the Commission of Carnaval and informed in advance.

Among the obligations of the special schools are: Parade, at least, 230 Members, being at least 15 in the ward of Baianas, eight members on the Committee and 40 on drums. There is also the requirement of, at least, two floats and a parade with duration of 50 to 65 minutes.

Schools must Access group parading with at least 160 Members, being 10 Bahia, eight on the rack and 30 on drums. Must have at least one float and parade 40 to 50 minutes.

The questions on trial will be Battery, Fantasy, Master room and Porta Bandeira, Commission of Front, Allegories and props, Samba-Enredo, Harmony, Plot and Set.

The body of judges will 18 members, two for each style. The appointment of members will be made via public notice of call for public accreditation of interested, that should be recognized and remarkable specialization in the area. The verification will occur in date and place still to be defined by the Commission of Carnaval.

Flower Ranch – Traditional Carnival group Curitiba, formed by at least 400 people of the third age participants of social programs of Curitiba, the Ranch of flowers is the attraction that typically opens the parade of samba schools.

For the design and production of event, that next year will have the theme "Berlamino Nhô and Nhá Gabriela", call notice was published which provides a value of up to R$ 50 thousand. Interested parties should send their proposals until the day 22 of december. The envelopes will be opened on the day 28 the same month.

Results – The samba school Carnival champion 2015 It was the Youth Blue, followed by Royal Academicians, the Lions of youth and the ambassadors of Joy. In fifth place was the Empress of Freedom, that fell to the access group. The school was the Netizens already secured access to the special group in 2016. The school left behind the pine forest United.

The complete notices can be found on Notices section of the site of the Cultural Foundation of Curitiba.

Previous: V Municipal Cultural Conference happens this weekend
Next: The Nutcracker in the session day Philos 19 of december