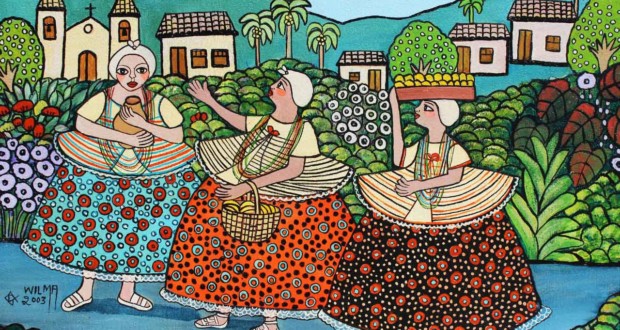 “…a rich painting, symbol not only of a city, but of all Brazilian people…“

Jacques Ardies exhibits in its gallery and signs the curatorship of a exhibition in tribute to an artist partner of many years: “Tribute to Wilma Ramos”. Composed by 24 acrylic canvases painted by the artist in the period between 1981 and 2005, serves as a tribute and thanks to the artist's loyalty and presence along the gallery's trajectory since its beginnings in 1979 (Clove and Cinnamon Gallery).

Known and recognized as a naïve artist, Wilma Ramos created works of intense color and figures with meticulous detail. Even being inserted in the classification of an art where spontaneity, authentic creativity, making art without school or guidance, the artist has characteristics based on the simplification of the elements, valuing the representation of everyday themes and cultural manifestations of a people.

The works of Wilma Ramos have specifics, vibrantly colored; she painted, especially with acrylic paint, which has a greater luminosity than oil paint; contoured your characters, which in general had a very common appearance, seeming to be from the same family. The themes of the oxuns, fishermen working, free fairs, orange and sugar cane crops, popular parties – like the one in bumba my ox, the giant dolls, the workout of Judas, religious processions and the feast of the Holy Spirit, the portraits of sacred images, like the amazing Nossa Senhora do Arco-Íris and San Francisco sleeping in the Brazilian forest, surrounded by animals and indians – are among the artist's favorite themes. It was with the workThe Baianas” who Wilma Ramos gained recognition and success in the world of Naïve Art. they are unique, with printed geometric skirt, reminiscent of calico cloths, very common in folk art. On top, they wear a white short-sleeved blouse adorned with colored bead necklaces and carry a white cloth tied on their heads., typical. The rich universe of the orixás and oxuns had a guaranteed space in the artist's work. In the words of the artist, in a statement given in 2007, “Almost everything I paint I connect the fauna and flora. I am a defender of nature. This is a way to say hello about the need to preserve the environment.”

The naive artist is not necessarily isolated from the events of his time and cultural moment.. Already in São Paulo, where he moved in the 1990s 1970, through an artist friend, Wilma Ramos has access and contact with artists of the modernist movement such as Di Cavalcanti and Tarsila do Amaral, in addition to other great cultural exponents such as Manabu Mabe, Takeschi Susuki, Takaoca Fukushima, Alzira Pecarari and Flávio de Carvalho. The naive art of Wilma Ramos remains intact but, contact with other creative strands enables influences and options previously unavailable to the artist's small personal universe.

The curator explains and justifies, with mastery, the shows: “Wilma Ramos dedicated himself to painting at an early age, in 1968. He found his language and stayed true to his particular style of expressing himself. round faces, slanted eyes, its characters are unmistakable and, mostly, seem to form a group of well-connected people and this is totally consistent with their own charismatic way of relating. Wilma was sweet, sweet and sensitive. He became interested in the Afro-Brazilian rituals of Candomblé and the folkloric festivals, so popular throughout Brazil and, more intensely, in Bahia. He also liked to interpret country scenes with harmonious and well-orchestrated colors that showed his unshakable optimism about tomorrow.. After a stay of 4 years in Spain, in 1979, Wilma joined the group of artists who were going to support the new Gallery Clove and Cinnamon, in Alto da Boa Vista. From that moment on, it began to accept all invitations to participate in exhibitions. We received unrestricted support from the artist Wilma Ramos is today, 43 years later, we set up this exhibition to express and demonstrate our gratitude”.

The Jacques Ardies Gallery, located in Vila Mariana, occupies an old house completely restored. The gallery, which started its activities in August 1979 (Clove and Cinnamon Gallery), its vocation is the dissemination and promotion of Brazilian naïve art. Along 42 years, many exhibitions were held: 120 individual shows and more than 200 press conferences, in its own space and also in museums such as the MAC in Campinas (SP), MAM from Goiânia (GO), Art Space 4 of Paris (FRA), IMF Cultural Space in Washington D.C.. (USA), International Museum of Naïve Art Anatole Jakovski in Nice (FRA), Latin America Memorial in Sao Paulo (SP), to name just a few and also in art galleries like Galeria Jacqueline Bricard, em Lourmarin (France), at Galeria Pro Arte Kasper, in Morges (Switzerland) e a Gina Gallery em Tel-Aviv (Israel).

In 1998, Jacques Ardies released the book Naive Art in Brazil with the collaboration of the critic Geraldo Edson de Andrade and 2003, published the book on the life and work of the artist from Pernambuco Ivonaldo, with text by the teacher and art critic Jorge Anthonio e Silva. In 2010, released the second book on the Naive Art in Brazil with text written by you and comments by 4 friends also in love with this art. Four years later, in 2014, this same book has been edited in a French version.

The gallery permanently exhibits paintings and sculptures by 80 artists selected and considered as representatives of the Brazilian naif art movement.