Museu de Arte Sacra de São Paulo – MAS / SP, institution of Secretary of Culture and Economy Creative from the State of São Paulo, abre at the exhibition "Widows of Living Husbands" Leandro Junior, with paintings over two meters high, made with clay from the slopes of the Jequitinhonha Valley. The curator is Simon watson.

A exhibition marks the first institutional individual of Leandro Junior, painter and figurative sculptor who is inspired by the strong culture and intimacy fostered in a unique way in the rural valley of Jequitinhonha, located in the hinterland of Minas Gerais. Born and raised in Chapada do Norte, he has been developing his art from clay that he himself extracts and refines to be applied on canvas, or shaped and fired in an oven also made of clay, to turn into sculptures.

“From the first contact with the works of Leandro, more than four years ago, I had the pleasure of making three trips to Jequitinhonha where he introduced me to the people and customs of the region and the young people of Quilombo de Cuba, where he worked as a teacher. This is truly a place of humble and generous people., immersed in a lively and tumultuous history “, says curator.

the calls “widows with living husbands” are common in the Jequitinhonha region: women who see themselves alone — with the swidden, the children and all the household duties — while the husbands travel to harvest coffee or sugar cane, getting to spend months or years away. Leandro, he is also the son of a “widow”, portrayed 12 of them, always on his back and carrying SUVs on his head: kerosene can, basket, gamela, bundle of clothes, bag, botija, firewood, pan, clay pot, bowl, milkmaid. “are strong women, autonomous, protagonists and independents, living as matriarchs in a patriarchal society”, suggests the curator Simon watson.

Patroness of the Quilombo of Cuba, the figure of Our Lady Aparecida inspires faith in Leandro and in your family. The artist had already made a statue of the saint, but decided to make a larger scale representation, with Afro features and serene expression, carved over several weeks of work directly in the garden of the MAS / SP. “It's a figure that brings me a lot of strength”, account the artist, who prepares clay in black and reddish tones to achieve the result and built a kiln in the outside area of ​​the museum especially for the burning of the sculpture. “I had never done anything of that size and I divided the composition of the statue into eight parts”, anticipates the artist.

Complete the exhibition teaser of the documentary series that the Brazilian director based in New York, Diego Kelman Ajuz, is producing in Jequitinhonha. The initial plan was to make a series of short videos with interviews of the widows portrayed by Leandro, but the strength of the testimonies motivated the director to make a bigger project, in nine episodes. “It's a chance to retell the history of Brazil from new angles and away from clichés.”, suggests Ajuz, who found there women with values ​​and wisdom that go far from school/academic knowledge. “Many of them cannot read or write., but they talk looking in the eye, in direct contact, without so much noise, owners of a strength and a presence that we may have lost.”

Contemporary LIGHT is a program of contemporary art exhibitions that unfolds into diverse cultural events and actions, public and private. Developed by the curator Simon watson, the project, currently, is based on Museu de Arte Sacra de São Paulo. in this space, Contemporary LIGHT features themed exhibitions by guest artists, in order to establish conceptual and material dialogues with works from the institution's historical collection. Although strongly focused on the current Brazilian art scene, Contemporary LIGHT is committed to a variety of practices., cultivating partnerships with performing artists and organizations that produce art events. 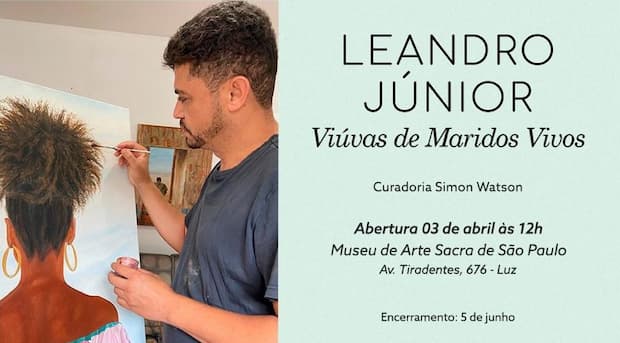 Leandro Junior de Sousa is a painter and sculptor. Born in the Jequitinhonha Valley, in the State of Minas Gerais, studied art at Faculdade São Luiz de Jaboticabal, in São Paulo. in the last three years, participated in individual and group exhibitions in galleries and museums, such as: Central Gallery, São Paulo (August 2020); National Museum of the Republic, Brasilia (October 2020); Slag Gallery, New York (April 2021); Holy Amaro Institute, São Paulo (May 2021); Museum of sacred art, São Paulo (June 2021); and Cultural Center Recanto das Artes, The Jequitinhonha Valley (august 2021). Leandro Júnior was a full fellow at Simon Watson Arts – Artist in Residence, São Paulo (2019 to 2022). In addition to artistic practice, has ten years of teaching experience, working with young adults at the Social Assistance Reference Center (MORROW), with adolescents from Quilombo de Cuba and with other quilombola communities in the Jequitinhonha Valley.

Born in Canada and raised between England and the United States, Simon watson is an independent curator and specialist in cultural events based in New York and São Paulo. A veteran with thirty-five years of experience in the cultural scene on three continents, Watson conceived and curated more than 250 art exhibitions for galleries and museums, and coordinated consulting programs in art collection for numerous institutional and private clients. in the last three decades, Watson worked with emerging and unrecognized artists, bringing them to the attention of new audiences. Her area of ​​curatorial expertise is identifying visual artists with exceptional potential, many of which are now internationally recognized in the blue-chip category and are represented by some of the most famous and respected galleries in the world..