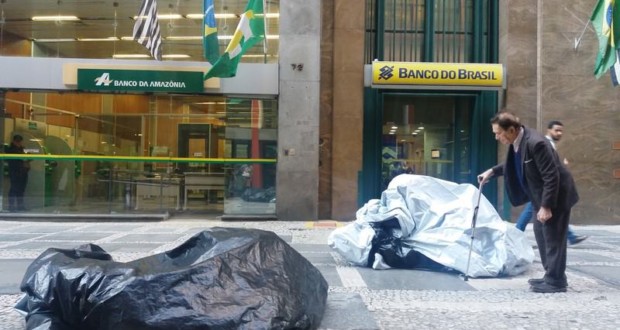 Picture of the show - To complete a decade, the ... AVOA! Artistic core does scenic action at the confluence of the XV de Novembro Street and Treasury Street. Photo: Silvia Machado.

Four dancers in the …AVOA! Artistic Core get involved, on the street,
in a large plastic; passers-by watch with curious look

“(…) Packing!… Packing!… Because the phenomenon mentioned has many meanings and elicits varying reviews, worse than that: because it is simply ambiguous (…) Besides, This need to, very human, and our passion to keep, to isolate, to ensure, to transmit, – all of this constitutes a process nearly as. That opportunity! Let us not lose sight, either, the possibilities of emotional order. We appoint some: the promise, hope, the feeling, the request, the taste for unknown and mysterious. Packing!…(…)” Excerpt from the packaging Manifest, of Tadeusz Kantor

"Solos" is an artistic and urban action …AVOA! Artistic Core, directed by Luciana Bortoletto. The Assembly is not on stage Italians, in theatres, in theatres. In the streets of downtown São Paulo. More precisely at the confluence of the streets XV de Novembro and Rua do Treasure. The audience passes – and the many stopping-watching scenic intervention, Urbana, artistic and… Inquietadora. Is characteristic of the Group, who completed ten years of road in 2016, be on the streets, dancing in the streets, mix people and things from the street. Those who pass and those who attend, is the uncertainty and doubt what you're witnessing.

This action has start day 14 October 2017 and integrates the project "becoming", contemplated by the XX Edition of the Municipal Development Programme/Dance 2016 and is divided into three tie ups (or acts), with seasons of other shows on dates in the months of November 2017 and January 2018. "Solos" born from the inspiration of Luciana Bortoletto, He has done solo performance similar in 2012 with which Moukarzel Gomes award, in 2013.

Under large tarps – on one side black, the other white-core members were inspired by the manifesto The Packaging, the Polish Director Tadeusz Kantor (1915-1990) to create the Street solos. This is a game in which the dancers and choreographic canvas if affect each other in urban context, in public spaces of large circulation, blending the local landscape (Sonora, Human, architectural, social). There is no way of knowing, to the right, What emerges from the crowd. What is known is that, from time to time, you don't want to stay for a long time in silence, because there is an urgent need to move, fold (-If), rub, tie, hide, reveal, divert, say and don't appease. 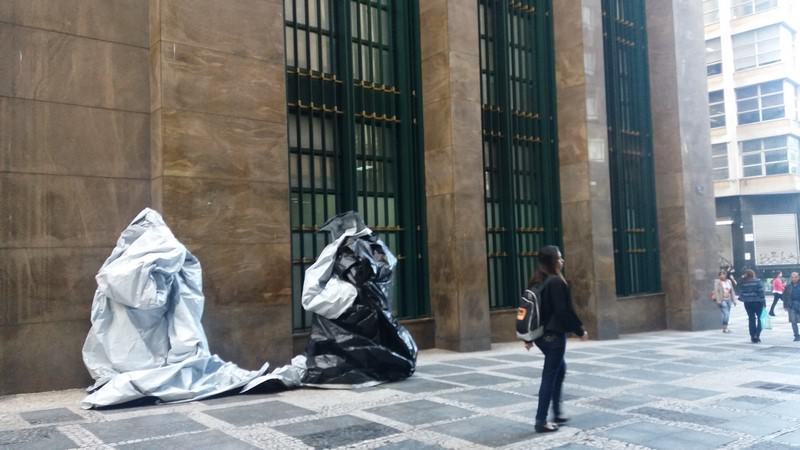 Picture of the show-To complete a decade, the …AVOA! Artistic core does scenic action at the confluence of the XV de Novembro Street and Treasury Street. Photo: Silvia Machado.

Directed by Luciana Bortoletto, since 2006 the core is dedicated to a work anchored in contemporary dance languages, scenic improvisation and somatic approaches, searching an embodiment which invites the proximity, believing in the power of gesture and collective artistic actions. Explores the choreographic creation in the urban context and off the stage. Is the originator of the SPIN-Independent networked Groups, It promotes encounters practical-theoretical between artists and researchers collective urban poetics and the dance in this context. Participated in the Bienal SESC de Dança 2013, Urban Visions Festival with performances in São Paulo, Alagoas and Portugal, Shows to encourage Dance, Urban Art pitch Festival, Escambos Aesthetic Shows, inauguration of the SESC 24 May (Caravan City intervention, directed by Alex Ratton), Shows Nomad dance Place, Satyrianas Festival, Virada Cultural, among others.

Previous: Alex Flemming inaugurates exhibition in São Paulo
Next: Group exhibition the Cry of the Innocent by Rosangela Vig